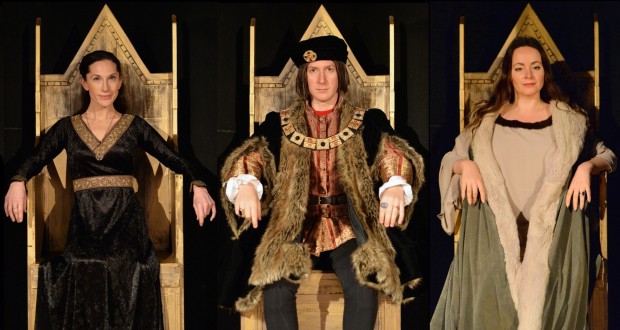 Pros: An original, thought-provoking counterpoint to Shakespeare’s Richard III illuminated by a powerful, emotionally engaging leading performance. Cons: Claims to represent the definitive version of ‘true events’ are distinctly iffy. The supporting roles are more lightly sketched, whilst some costume choices give the production a ‘school play’ air. ‘Politics have nothing to do with truth … Truth is what you make it.’ Whilst I can’t, in good conscience, endorse much of Margaret Beaufort’s motherly counsel, delivered in disturbingly sensual tones to the young Henry Tudor as he tends her apparently knotty back with apparently insufficient firmness, this, at least,&hellip;

Richard III transforms from ‘monster’ to martyr before our eyes, in an entertaining historical drama undermined by its reliance on archetypes.

User Rating: Be the first one !
‘Politics have nothing to do with truth … Truth is what you make it.’ Whilst I can’t, in good conscience, endorse much of Margaret Beaufort’s motherly counsel, delivered in disturbingly sensual tones to the young Henry Tudor as he tends her apparently knotty back with apparently insufficient firmness, this, at least, is something we can agree on. In penning Good King Richard, Ian Dixon Potter, Golden Age Theatre’s artistic director as well as, intriguingly, a member of the Richard III Society, claims to dramatise, ‘for the very first time, the true events which propelled Richard onto the throne of England and two years later, led to his downfall’. We’re all familiar with the image of the murderous monster, hunched of back and withered of arm, popularised by Shakespeare. The very fact that, despite some pretty convincing evidence to the contrary, we’ve accepted this version of events for half a millennium is testament to the power of the playwright’s pen.

But ‘for the very first time’? On stage, maybe, but I think a few period drama fans might have to disagree with that one. I can’t have been the only audience member busily drawing parallels with Philippa Gregory’s Cousins’ War novels, or with The White Queen, the 2013 BBC adaptation of those books. Both painted a convincingly nuanced portrait of our eponymous protagonist, backed by carefully weighed evidence. Evidence which, nevertheless, remains full of gaps apt to be filled by the eager of pen and open of mind. Dixon Potter’s version of ‘true events’ conforms to his self-penned proclamation that truth ‘is what you make it’. Despite Good King Richard’s (many) divergences from Gregory’s vision, it may be equally plausible, but accepting every element unquestioningly would be a bit of a stretch.

The playwright demotes Elizabeth Woodville, Edward IV’s widow and Richard’s sister-in-law, from heroine to villainess. Stunningly, he even makes her a murderess, which, given the uncertain balance of evidence, could be considered just as unjust a label as those previously assigned to Richard. Richard himself meanwhile is elevated to superhuman, nigh on sainted, status. But although he might, at times, feel just a little too good to be true, Nicholas Koy Santillo’s compellingly human portrayal of Richard carries the production (despite a slightly dodgy wig). Poignantly rousing direct addresses to audience, as we become his troops on the eve of the Battle of Bosworth, bracket the action in a joltingly satisfying manner. His attachment to his wife Anne and his internal wrangles of conscience over policy and life in public office are consistently believable and engaging. Supporting performances felt a little lacking in substance by comparison, however, and although I enjoyed Margaret and Henry’s sensationally camp mother-son double act, the characters of both Margaret and Elizabeth appeared to be rather lightly sketched in subtly varying shades of Lady Macbeth.

The production labours a little under the weight of exposition necessary to condense the intrigues, deaths and double-dealings of two years in medieval England into ninety minutes, suffering the lack of Shakespearean poetry to smooth its path. Nevertheless, it is punctuated by flash points of human drama, as well as by one knife or another being held to one throat or another roughly every three minutes. The most interesting development is perhaps Richard’s reaction to betrayal, which quietly urges us to consider the essential costs of wielding enormous political power. Framed by a makeshift velvet-curtained proscenium arch, Good King Richard can’t help but force us to question our notions of fact and fiction, public and private, appearance and reality.

Previous: All Your Wants and Needs Fulfilled Forever, The Vaults – Review
Next: Transports, Pleasance Theatre – Review