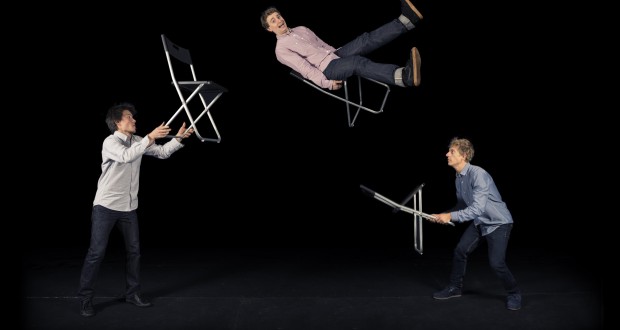 Pros: Part display of juggling skill, part lecture on juggling history and culture, this show is an entertaining introduction to the circus subculture with inventive uses of technology.

Pros: Part display of juggling skill, part lecture on juggling history and culture, this show is an entertaining introduction to the circus subculture with inventive uses of technology. Cons: Lecture and history sections are generally less interesting to watch. I once tried to teach myself how to juggle. As someone who avoids dancing and anything else that involves more physical coordination beyond walking, it wasn’t surprising that I never succeeded despite watching numerous video tutorials with names like, “Everyone can Juggle!” and “Learn to Juggle in One Day.” I gave up after a few weeks of daily practice and backache&hellip;

User Rating: 4.75 ( 2 votes)
I once tried to teach myself how to juggle. As someone who avoids dancing and anything else that involves more physical coordination beyond walking, it wasn’t surprising that I never succeeded despite watching numerous video tutorials with names like, “Everyone can Juggle!” and “Learn to Juggle in One Day.” I gave up after a few weeks of daily practice and backache from picking up dropped balls. As much as I admire people who can do things like juggle, handstands, and dance without looking like someone having a seizure, I am clearly not destined to join their ranks. Despite my inabilities, I love seeing physical theatre and dance-based performance. I’m awed by the performers who are able to do such beautiful things with their bodies.

I must admit, I haven’t seen much circus and don’t know a great deal about the genre. When I was allocated this review, I was both excited and apprehensive to see Circus Geeks’ latest show. I marvel at the physical skill and coordination involved in juggling, but I’ve never seen an entire show devoted to the art. I wasn’t sure quite what to expect.

What I certainly didn’t expect was the amount of talking. We were given an overview of juggling techniques, vocabulary and juggling styles in other countries, which was a particularly funny (but polite) generalisation about performance in other cultures. Obvious influences in these sections were maths, science, technology, TED talks and circus school training. Whilst some of the information was interesting, much was delivered like a lecture, complete with graphs, video demonstrations and the like. Having no interest in maths, I found these bits rather dull. As jugglers rather than actors, the delivery was also a bit flat, especially considering the talky introduction was pretty lengthy. I estimate about a third of the show was talking rather than doing.

On the other hand, the spectacle was great fun, though I would have liked to see a lot more of it. With a cast of three men, the acts varied in the number of people performing at one time. Some of the acts were more standard than others, some were quite silly (one involved the fear of being slapped in the face with a dead fish. Yes, a real one), and the finale was unlike anything I’ve ever seen before: incorporating a live feed, projections and creating a holographic effect. It was definitely worth sitting through a school-like lecture for it.

Performers Aaron, John and Matt look like your stereotypical geeky guys, but each has a distinct character. Matt never speaks, instead has a range of cheeky expressions. Aaron is awkward, insecure and apologetic. John’s a bit of an arrogant bully. I couldn’t determine whether these are constructed characters, or who they really are. It’s possible that they’re each a bit of both.

There was a casualness to the production that makes it feel like a work in progress but also one that feels like it could change with every performance. One of the acts hinged on them practicing a new act that kept failing. The three performers clearly have a wide repertoire that they could alter with little rehearsal. Beta Testing will shortly be relocating to Udderbelly, a venue catering to variety and circus acts. No doubt they have a unique show that circus audiences and jugglers will be able to enjoy.

Previous: Much Ado About Nothing, The New Wimbledon Theatre Studio – Review
Next: Face to Face, Drayton Arms Theatre – Review