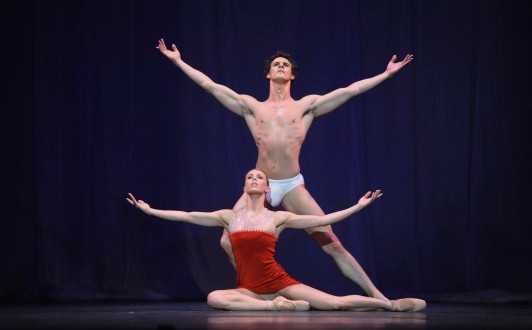 Pros: Carl Orff’s iconic musical classic is here a visual extravaganza with humour, style and not a little naughtiness.

Cons: Serenade which precedes it is classical ballet at its dullest. Go after the interval.
Carmina burana & Serenade, English National Opera – Review

Pros: Carl Orff's iconic musical classic is here a visual extravaganza with humour, style and not a little naughtiness. Cons: Serenade which precedes it is classical ballet at its dullest. Go after the interval. Carl Orff's 1936 classic Carmina burana is a cantata for orchestra and choir based on the 13th century bawdy monks' tales of the same name. You'll certainly know the opening piece, 'O Fortuna', either from the Old Spice TV ad or from its use in many other films and commercials. It's a robust and iconoclastic piece that falls into no set category; imagine Gregorian chant sung by football&hellip;

This is about the most exuberant, vibrant, downright enjoyable classical performance you'll have seen for years.

Carl Orff’s 1936 classic Carmina burana is a cantata for orchestra and choir based on the 13th century bawdy monks’ tales of the same name. You’ll certainly know the opening piece, ‘O Fortuna’, either from the Old Spice TV ad or from its use in many other films and commercials. It’s a robust and iconoclastic piece that falls into no set category; imagine Gregorian chant sung by football supporters during a Proms concert and you’ll get some idea. Bold, imaginative, rhythmically surprising, it’s one of the 20th century’s most iconic and enjoyable pieces of classical music.

Here, it’s performed by the Birmingham Royal Ballet, and right from the start it’s clear we’re not in for an evening of classic dance: the curtain rises to reveal a lone dancer wearing a blindfold, high heels, and a black cocktail dress. The episodic work tells the loose story of religious clerics discarding their dog collars in pursuit of more fleshly delights, expressed with wit and panache. Male dancers in purple suits, their hair dyed orange, hurl themselves around the stage; ballerinas in negligees and thongs are scarcely more demure, as they hoof it up with vigour.

There are moments of high humour, such as the two heavily pregnant ballerinas, joined by a third who already has two babies strapped on front and back; or the vast, almost spherical sextet of bloated gourmands who nearly tuck into a feather-clad dancer emerging from a vast tureen. But it’s the final monk, stripping down to his underpants before dancing with the cocktail dress-clad ballerina from the opening scene, who really steals the show.

The stage at the Coliseum is largely bare, as it has to be to make room for the dancers. But flies and lights frequently come in to set the scene. There’s a sequence in which a vast silk curtain the size of the stage drops to the ground, to be manipulated by the cast into an enormous billowing shape that’s almost alive in its animalistic writhing.

This production premiered in Birmingham in 1995, and 20 years later it remains fresh and innovative. It’s clearly a piece the Company love to perform, their pleasure is evident from the raunchy performance. With an orchestra that requires an extended pit and all four main boxes filled with the choir, this is a huge production on every level. If you’re unsure about dance, this could well change your mind: it’s about as far from classical ballet as you can get.

Carmina burana is preceded on the double bill by Serenade, a ballet created in 1935 by the noted choreographer George Ballanchin and set to Tchaikovsky’s Serenade for String. Where Carmina burana breaks all the rules, Serenade is as traditional as ballet can get. All the standard moves are here: spinning on pointe, arms stretched to the sky, and that sequence where the ballerinas clasp each other’s hands behind their backs and shimmy sideways across the stage. If you like your ballet classical, this is probably right up your street. As you can guess, it wasn’t to my taste – but Carmina burana more than made up for it. A vastly enjoyable evening.