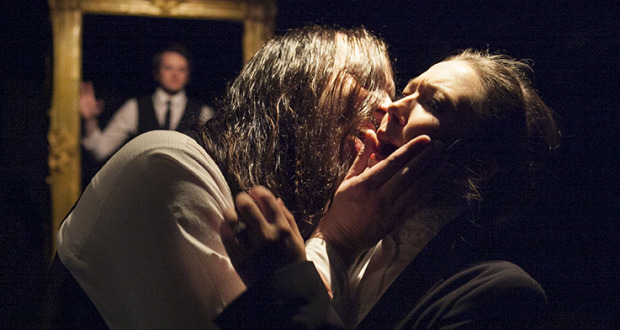 Pros: Good performances and excellent set design. The spooky elements make this a fun show to see in the run up to Halloween.

Cons: Some character choices are ineffective and there are plenty of opportunities to add scares that are not exploited.
Jekyll and Hyde, Lion and Unicorn Theatre – Review

Pros: Good performances and excellent set design. The spooky elements make this a fun show to see in the run up to Halloween. Cons: Some character choices are ineffective and there are plenty of opportunities to add scares that are not exploited. Jekyll and Hyde is an adaptation of the book by Robert Louis Stevenson, which is of course a well-known story. Let’s start off with a quick refresher though: Henry Jekyll is a doctor who becomes increasingly torn between two sides of his personality. He’s been experimenting with a potion to hide the nastier side to his character,&hellip;

With inventive design and staging, a speedy pace and great atmosphere, this is an enjoyable show for this time of year.

User Rating: 4.55 ( 1 votes)
Jekyll and Hyde is an adaptation of the book by Robert Louis Stevenson, which is of course a well-known story. Let’s start off with a quick refresher though: Henry Jekyll is a doctor who becomes increasingly torn between two sides of his personality. He’s been experimenting with a potion to hide the nastier side to his character, but unfortunately has achieved the exact opposite: under the influence of the serum he transforms into his evil self, Edward Hyde.

The most immediately striking aspect of this production in the set. The floor and walls are covered in quotes and mathematical equations, floor to ceiling. There’s a chaise longue on the stage and a large gilt picture frame suspended in the middle of the stage’s platform. The set is simple, but effective in evoking Dr Jekyll’s mental torture. The audience sits around three sides of the playing area, which is well-used by director Simon James Collier. No side of the audience is neglected in the staging and the intimate theatre made us feel included in the action.

Rory Fairbairn excellently plays the polite and reserved Dr Jekyll. He easily captures his professional motivation, his fear of Hyde and his love for his friends and family. Especially his relationship with his loving wife Penelope, played by Elizabeth Bryant, is very genuine, which makes her agony over Jekyll’s breakdown truly moving. Her relationship with her father is less credible. Bryant looks quite close in age to Darragh Kelliher, who plays Mr Carew as a stereotypical posh man without any depth. His inspector Willard is better, but still tending towards a rough sketch of a Victorian police officer rather than a fleshed-out person.

Good performances come from Rebecca Bell, Leonora Haig and Connie Jackson as the domestic staff at Dr Jekyll’s residence. They play other female characters as well, but the servants are their best characters. Tom Hartill plays Jekyll’s best friend, lawyer Gabriel John Utterson. Like his relationship with Penelope, Jekyll and Utterson clearly care about each other a lot.

Wyatt Wendels plays Mr Hyde, Dr Jekyll’s evil alter-ego who is released through Jekyll’s academic research. Always present behind the huge golden frame, he is a constant reminder of the evil within us all. This character needs some refining, though. He is portrayed as a grunting, hulking monster who is barely articulate. His physicality and voice are too crude for Hyde. This character needs to epitomise evil but have some sophistication rather than being pure, brute force. With the main characters giving truthful, realistic performances, his just doesn’t seem to fit in with the production style.

There are a few moments when the staging is effectively used to create suspense and give the audience a scare. Plenty of fog and low lighting add to the spooky atmosphere, but there are plenty of opportunities to make the production scarier that remain untapped, which is a shame particularly in the lead up to Halloween. The music and sound effects to emphasize Hyde’s attacks were excellent, but could have been used more elaborately to build suspense and add to the film noir effect the production seems to aim for.

The show’s running time is just over an hour. The actors have loads of energy that never lags so the pace is fantastic; the show even could’ve been a bit longer. Some adjustments and development would certainly enhance the experience, but overall Jekyll and Hyde is a fun, creepy play perfectly suited to the chilly autumn nights.