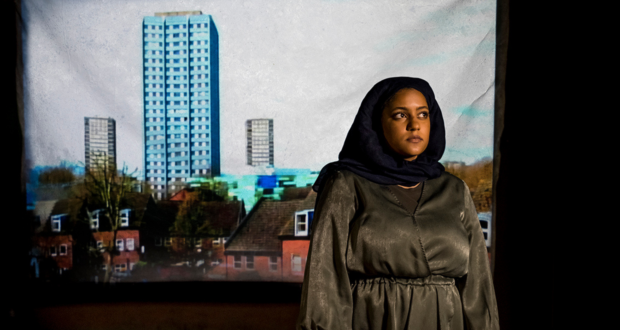 On 15 June 2017 I was standing in a train station in Italy. I remember seeing a horrific image splashed across the front of all the papers in the shop on the platform. And then I saw the word Londra in the headline. It’s a tragedy that will leave an imprint on all our minds, but&nbsp;few of us can imagine the horror of being a resident of Grenfell Tower that night. I’m aware of some details of the failings that led to this catastrophic event, and am surrounded by blocks of flats being slowly stripped of cladding in my&hellip;

Dictating to the Estate shines a light on the shockingly unjust failings that led to the Grenfell Tragedy. This is a tough but important play.

On 15 June 2017 I was standing in a train station in Italy. I remember seeing a horrific image splashed across the front of all the papers in the shop on the platform. And then I saw the word Londra in the headline. It’s a tragedy that will leave an imprint on all our minds, but few of us can imagine the horror of being a resident of Grenfell Tower that night. I’m aware of some details of the failings that led to this catastrophic event, and am surrounded by blocks of flats being slowly stripped of cladding in my own borough of Wandsworth. But I must admit, I was naive regarding the extent of the concerns of residents in the years before the tragedy, and the shockingly poor failings and disinterest of the Tennant Management Organisation, councillors, and contractors.

Dictating to the Estate’s purpose is to keep what happened at Grenfell in the spotlight; to ensure all the failings in advance of the fire stay in people’s consciousness so that nothing like this ever happens again. It was horrifying to hear the details, sitting in the Maxilla Social Club just metres away from the tower itself. The play takes its text from minutes of meetings, letters, and personal accounts of the years before the disaster, with five actors playing a huge 48 characters, switching between infuriated residents, nonchalant councillors, and abusive contractors. They cleverly show the different roles through subtle changes in mannerism and accents, yet voiceovers also clearly tell us who is speaking and in what context: this is required but can also feel a little overwhelming at times.

The play is split into a number of sections dealing with different aspects of Grenfell’s history in the years before the fire, from the proposed redevelopment of the area (or social cleansing as the residents rightly call it) to the shoddy refurbishment of the tower. As a result, the timeline does jump around a fair bit, and it can be a challenge to keep track of the order of events. The pace of the play is fast, and while great at keeping the audience engaged, it occasionally makes it tricky to follow. There is a lot of information to process, and the cast have quite the task to keep everything in order and accurate. As a result there were a couple of little fluffs of lines and cues.

The overriding sensation though is clear. Grenfell residents were shockingly let down by a huge number of powerful people: those that could have stopped this tragedy from happening had they just listened to the residents and not prioritised saving budget over health and safety. The play features the now eerily prophetic words of David Cameron in a 2011 speech where he boasts about his plan to “kill off the health and safety culture”.

I expected to be more upset throughout the play. What I felt instead was seething anger. That was until the final moments when Tamara Camacho stands in a spotlight and recites a witness statement recounting the night of the fire. This left me winded. Before the actors take their final bow, with tears in their eyes, we sit in silence and read the names of those that lost their lives. This should never happen again. But the distressing reality is it could have never happened at all.

Dictating To The Estate plays at Maxilla Social Club until 12 June.

Special Measures are fundraising to have a mental health first aider on board every evening due to the triggering nature of the play. You can support them via their crowdfunding here.

You can find out more about this play in our recent interview with Nathaniel McBride here.

Previous: Review: We Will Rock You, New Wimbledon Theatre
Next: Review: The Paper Dolls, Polka Theatre