Home » Features and Interviews » Interview: Dictating To The Estate 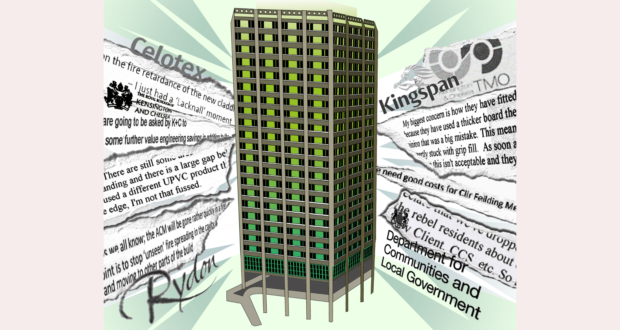 Author: Everything Theatre in Features and Interviews 25 May 2022 0 545 Views

Dictating To The Estate is Nathaniel McBride‘s play that looks at the housing estate where the Grenfell Tower sits. But it isn’t directly about the fire, but rather the years preceeding it, when the estate underwent major redevleopment. It explores how local resident concerns were ignored and how so many factors came together that would ultimately lead the the tragic fire.

The play felt important and one we wanted to give plenty of attention to. So as well as this written interview you can also listen to Nathaniel tell us more about it on our Runn Radio podcast here.

You can also support the production by donating to theie crowdfunding here, this will help finance all production costs and assist the play in reaching a wider audience.

The play looks at Grenfell pre-fire – what made you want to tackle it from that angle?

The play is about how the fire came to happen, and that means looking at the events that preceded it. It is often said that the Grenfell Tower fire was avoidable. This is true, but understanding how it came to happen means examining the many acts that could have been taken to avoid it, but weren’t. The play is partly about these: not only acts of omission, but also positive refusals to act, which were taken by wide variety individuals, from government ministers to council officers to building contractors, over an extended period of time.

And what can you tell us about the sources you used to research your writing?

The main initial source was the Grenfell Action Group blog, which was kept by Edward Daffarn and Francis O’Connor, two residents living on the estate where Grenfell Tower stood. I was also able to get hold of some minutes of council meetings, as well as its regeneration plans for North Kensington. But the original problem was a general shortage of information.

This changed when Phase 2 of the public Inquiry came to cover the events dealt with in the play. Suddenly I went from having a relative lack of material to being overwhelmed by it. Among these new documents, the most revealing were the private communications among councillors, council officials and TMO officers, which showed the real attitude they held towards the residents they were supposedly appointed to serve.

A lot of information came from blogs published prior to the fire, have you tried to use as much of the text verbatim where possible to keep the original words?

My method is not to add or change any words, but I do edit, often quite rigorously. From a blog post that is several hundred words long I might, for example, use just a couple of dozen words. The issue then becomes one of ensuring the edited text retains something of the essence or intent of the one on which it is based. Whether I have done this successfully will be for others to judge.

Have you had much involvement with local residents and those affected by the fire itself during the writing and rehearsals for the play?

We have worked in contact with the residents we represent in the play. We asked their permission to use the evidence they presented to the Inquiry, sent them copies of the script when it was finished, and several have now met the actors who will be playing them. More generally, we have tried to keep all the bereaved and survivors involved in what we’re doing through Grenfell United, the organisation that represents most of them. We held an online reading for them last year, and this year we are holding a special performance for them at the beginning of the theatre run. We are also currently fundraising for a mental health worker to offer support to any audience members who may be affected by the content of the play.

You’ve clearly tried to highlight that it was not one single thing that caused this tragedy – but do you point a finger of blame at individuals or have you tried to show it was not one event or one person but a series of them?

What has most clearly come out of the Inquiry is that the failures which made the fire possible were systemic, and extended over a wide range of different institutions. It wasn’t just one thing that failed, but a whole series of things. In saying this, I don’t mean to exonerate the individuals involved,  but my own view is that it was the dysfunctional regulatory and supervisory systems, weakened over many years, that probably had  the greater influence on the outcome of events than any particular individuals. That is not to say that the arrogant and disdain attitude of the authorities towards the residents did not play a part. Nor is it to deny that, if we ask who or what made these systems so dysfunctional, we often find ourselves coming back again to certain powerful individuals. David Cameron boasting that his government would ‘kill off the health and safety culture for good’ is a case in point.

How vital has the information that has come out during the ongoing public inquiry been?

This has been key, and has enabled me to substantially rewrite and – I hope – improve the play. Perhaps the most important material to come out has been the revelations about what was going on behind the scenes at the council and the TMO, and in particular how senior officers and councillors were actively pursuing ways to silence residents and dismiss their concerns. At the same time, the Inquiry has been a vindication of the criticisms and concerns brought by the residents.

What is it you hope people who watch the play will leave thinking about?

I am hoping the play might have particular relevance to people living in social housing, and especially those who find themselves in conflict with their landlord. I don’t know if it will be much practical use, but I would like to think that it will give them a sense that they are not alone, and that the problems they face are common. While the residents of Grenfell Tower were victims, they were not passive victims: they repeatedly warned the council about fire safety issues, and when they saw the refurbishment of their homes was not being properly carried out, they organised and fought to hold it to account.  It is important that people know this.

And by staging it at Maxilla Social Club are you hoping that local residents will want to come and see it? Have you already had much feedback from them at all?

This is what we are hoping. Maxilla is a North Kensington institution, and has been an important meeting place in the campaign for justice for the victims of the fire. The venue has also let us set our own ticket prices, meaning we can keep them affordable. Our hope is that some people who would not normally go to see a play at a conventional theatre will come to Maxilla.

As for feedback, we did a stall last week on Portobello Road where we distributed flyers for the play, and I have to say the response was very positive.

Our thanks to Nathaniel for his time to chat with us.

Dictating To The Estate plays 31 May to 12 June at Maxilla Social Club. Further information and tickets can be found here.

Further information about the play is available on their website here.

Previous: Podcast: Dictating To The Estate
Next: Review: Happenings, The Hope Theatre