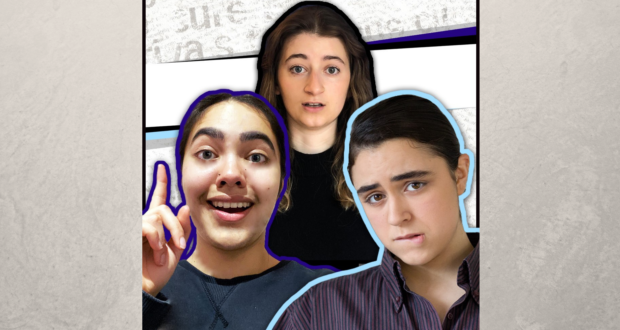 Camden Fringe 2021 There’s a fine line to be walked when making a comedy out of a serious topic. Too much laughter and its purpose can be drowned out, but not enough and it risks just being a sermon. Paperboy tackles toxic masculinity, sexual harassment and class privilege head-on by being utterly over the top, but also by giving the male roles to female actors. It is an interesting move and, in the main, one that works. Our unlikable duo are Matt and Matthew, played with gleeful stupidity by Giorgia Valentino and Nandini Bulchandani. Self-proclaimed journalists, they are somehow&hellip;

This completely over the top portrayal of lad culture, toxic masculinity and class privilege is full of laughter but still manages to make a very strong point.

There’s a fine line to be walked when making a comedy out of a serious topic. Too much laughter and its purpose can be drowned out, but not enough and it risks just being a sermon. Paperboy tackles toxic masculinity, sexual harassment and class privilege head-on by being utterly over the top, but also by giving the male roles to female actors. It is an interesting move and, in the main, one that works.

Our unlikable duo are Matt and Matthew, played with gleeful stupidity by Giorgia Valentino and Nandini Bulchandani. Self-proclaimed journalists, they are somehow running their own newspaper. What is abundantly clear is that neither has a clue about much, other than their own perceived superiority. It is also clear that their position of power comes from having daddy’s money behind them.

Assisting them in the office is Phoebe (Phoebe Taylor-Jones), who quietly sits at her laptop watching and listening to their “laddish” antics. It’s Phoebe who is the lynchpin of the whole play, even if she spends most of it quietly in the background. Because for all its laughter and over the top portrayals of men who really haven’t yet had to grow up, it is Phoebe’s closing monologue that is vital to everything. She brings the laughter to a sudden halt as every male, both on stage and in the audience, is made to question if they have ever been responsible for making a woman feel uncomfortable.

But prior to Phoebe’s moment in the spotlight, the laughter comes thick and fast. Lytollis’ writing and Amy Tickner’s deft directing draws out every nuance from the boys’ often-childish behaviour, the stage literally their playground. The fact they are portrayed by female actors somehow makes it feel more acceptable to laugh, even as we shake our heads in utter disbelief, almost revulsion, at their latest faux pas. It is impossible not to laugh at them, and maybe the important distinction is that we are laughing at them rather than with them?

Tickner also does a good job in bringing to life emails and news articles, taking them from laptop screen to the stage as actors transition from reading to becoming the people they are reading about. It takes what could be a dry moment to one that actually portrays so much more, something that becomes vital come the skilfully handled conclusion.

If there is one issue with Paperboy it is that with such obnoxiously OTT characters dominating for nearly its entire run time, the joke risks wearing thin. I’m not sure I could have tolerated the pair for much longer, without a strong urge to scream at them to shut the F up. But thankfully they just about avoid overstaying their welcome as their behaviour (and our laughter) is halted in its tracks by Phoebe’s final and powerful intervention.

It doesn’t take much to realise that aspects of the behaviour portrayed in Paperboy are not that unreal; especially considering that Lytollis told ET in a recent interview that it is based on people she has come across in her life. It is this believability that allows the play to feel relevant. Yes, they are complete caricatures, but at the same time it doesn’t take much to imagine they could be real and in charge of something. Maybe even the country, if you believe an utterly ridiculous, self-serving  buffoon with floppy hair and an uncanny ability to offend people then laugh it off as a joke and tell people not to be so easily offended could ever be in charge. I mean, really, could you imagine that happening…

Paperboy played as part of Camden Fringe, and has now completed its current run.

Previous: Review: Sisters of Charity, Lion and Unicorn Theatre
Next: Interview: Shining a light on A Thousand Sons