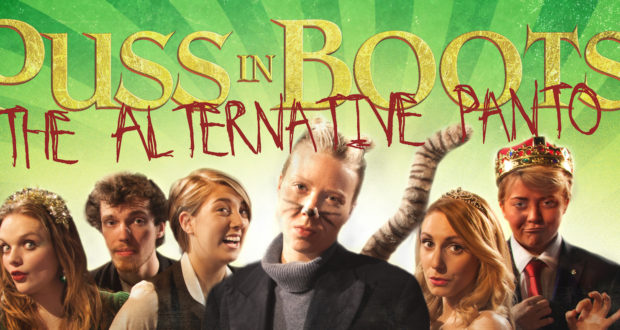 Win tickets to see Puss in Boots at The Drayton Arms

This is your chance to win a pair of tickets to see Puss in Boots at The Drayton Arms. To enter simply retweet one of our Puss in Boots competition tweets before 5pm on 4 December 2016 AND name a literary cat.

When young Colin is left with nothing but a cat in his father’s will he’s ready to give up. He is a millennial after all. It’s left to Puss to sort his master’s life out, rid the land of evil and gain Colin enough standing to marry the beautiful (but vacant) princess Fififi, because as 2016 has proved, anyone can rule a kingdom if you tell enough lies.

Our naughty pussy is going on a magical adventure featuring an all-female cast, original music, side-splitting laughs and special effects that will make you think we actually have some kind of budget. Leave grandma at home with the cheeseboard and let Fat Rascal Theatre purr-suade you to try something a little different this year.

Fat Rascal Theatre is a fresh new company from this year’s East 15 Acting School graduates. They are bold, cheeky and brash, using music and comedy to educate and empower. After sell-out Edinburgh and London runs of BUZZ: A New Musical, Robyn Grant (Book and Lyrics) and James Ringer-Beck (Music) are thrilled to be returning to this wonderful theatre in South Kensington with their new adult pantomime, Puss in Boots. With choreography from Matthew Ives and a cast that includes Allie Munro, Katie Wells and Rosie Raven (BUZZ: A New Musical).

Terms & conditions
Winner will be selected at random from all entries. Competition closes at 5pm on 4 December 2016. Winner receives a pair of tickets to see Puss in Boots at The Drayton Arms. Tickets to be collected at the box office with no cash alternative. Tickets are subject to availability and are not transferable or exchangeable. Additional expenses are the responsibility of the prizewinner. Editor’s decision is final.