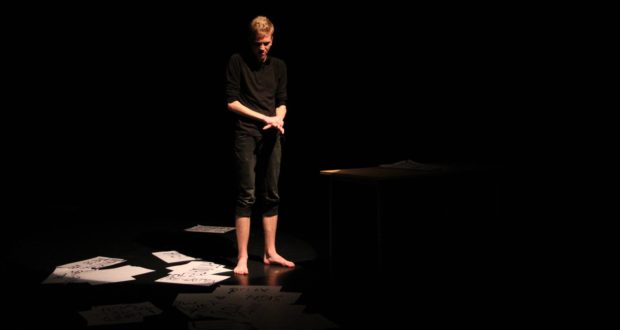 Pros: Valuable insight into a little-discussed condition. Dotted with dry humour. Cons: The incessant backing track is appropriately irritating. Nye Russell-Thompson’s show, Just a Few Words, is in fact about three little words. We are watching Russell-Thompson prepare to tell the girl in his life how much he cares for her. Trouble is, the L-word just won’t come out. Anticipating such trouble, Russell-Thompson has come prepared, and arrives on stage carrying a thick wad of prompt cards. These are very helpful to start with. When he struggles to say the word ‘continue’, his stammer getting him stuck like the&hellip;

A quirky and thought-provoking show, but not a rip-roaring night out.

Nye Russell-Thompson’s show, Just a Few Words, is in fact about three little words. We are watching Russell-Thompson prepare to tell the girl in his life how much he cares for her. Trouble is, the L-word just won’t come out.

Anticipating such trouble, Russell-Thompson has come prepared, and arrives on stage carrying a thick wad of prompt cards. These are very helpful to start with. When he struggles to say the word ‘continue’, his stammer getting him stuck like the scratchy backing track that plays on a loop throughout the show, he just resorts to holding up the card, which has the word writ large upon it. When he gets frustrated the cards offer words of encouragement and advice, reminding him to relax, to articulate, to try whispering. But as the show goes on, the cards become less helpful, even mischievous. If half the cards are the soothing voice of the speech therapist, the other half are the voice of his subconscious which recriminates with him, goads and mocks him. Like a school bully, these latter cards tell him that he’s blown it, taken too long to spit it out, made himself a laughing stock. If I dwell on the cards it’s because they are the set, the props and a large part of the script – no expense has been spared on marker pens! They include some cute visual gags and they function as a very effective window into the mind of a stammerer.

This is a one-man show, although Russell-Thompson is accompanied on stage by a BSL interpreter, and there is a Stagetext screen positioned prominently beside him. Obviously these are present for the benefit of certain audience members, but they do add something to the show even for a hearing person. On one side you have expression without words, on the other side words without expression, and in the middle someone who is trying to use words with expression. As he observes at several points, often it’s not enough just to be able to get a word out; to have the desired effect it has to be delivered in the right tone, at the right volume, at the right time and in the right context. Russell-Thompson is – how can I put this without sounding creepy? – a cute guy. At one point he and the cards have a debate about the perception that stammering is endearing. Whilst the clear message is that being fluent is preferable to being endearing, Russell-Thompson does play his boyish charm for all it’s worth, and it’s hard to avoid the conclusion that he wants to be endearing too.

Stammering is a deeply frustrating experience for the stammerer but also, let’s be honest, for the listener. The same is true of this show. There are long pauses and long periods of inactivity while the chap on stage struggles silently to master his mouth. There’s nothing else to look at, so as an audience we have nothing to do but wait patiently for some sort of resolution, just as we would in real life. There is a bit of audience participation to keep things interesting, and we’re even given the chance to try stammering for ourselves. The show offers valuable insight into a condition which doesn’t get a lot of airtime, and into the nature of love. It is subtle, thought-provoking and quirky, but it’s not wildly exciting. Combined with a roasting temperature in the Southbank Centre’s Blue Room on the night in question, my companion and I were just about done once the hour was up.

Written and Directed By: Nye Russell-Thompson
Booking Information: This show has now ended its run at the Southbank Centre

Previous: Party, Above The Stag – Review
Next: dreamplay, The Vaults – Review