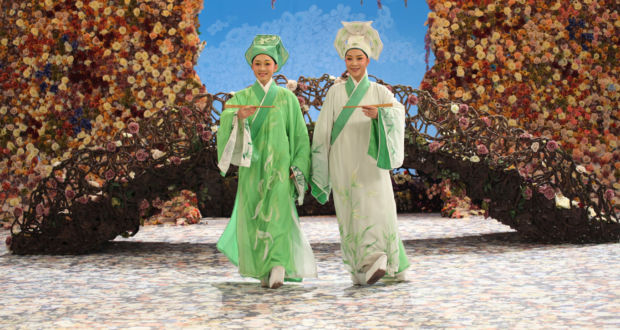 Pros: The musical performances are stunning, with some beautiful moments accentuated by the traditional Chinese costume.

Cons: I expected more interweaving of the two plays throughout, rather than the two plays performed mostly as separate entities.
Coriolanus and Du Liniang, Peacock Theatre – Review

Pros: The musical performances are stunning, with some beautiful moments accentuated by the traditional Chinese costume. Cons: I expected more interweaving of the two plays throughout, rather than the two plays performed mostly as separate entities. It’s hard to avoid that this year marks the 400th anniversary of the death of William Shakespeare. However I wasn’t aware that this year is also the 400th anniversary of the death of Tang Xianzu, a Ming dynasty playwright born in 1550 and considered China’s greatest playwright. The two are often compared, and this performance by the Zhejiang Xiaobaihua Yue Opera Troupe at&hellip;

This is a stunning production but at over 3.5 hours long, and in such a hot theatre, it was difficult to stay engaged throughout.

It’s hard to avoid that this year marks the 400th anniversary of the death of William Shakespeare. However I wasn’t aware that this year is also the 400th anniversary of the death of Tang Xianzu, a Ming dynasty playwright born in 1550 and considered China’s greatest playwright. The two are often compared, and this performance by the Zhejiang Xiaobaihua Yue Opera Troupe at the Peacock Theatre aims to commemorate both by interweaving Coriolanus and The Peony Pavilion.

I did not know either of the plays before the show, so went with an open mind as to how the two would be interwoven. However, for much of the opera a scene of Coriolanus was performed, followed by a scene from The Peony Pavilion. In The Peony Pavilion we witness Du Liniang fall in love in a dream, which leaves her so heartbroken that she dies. Then we are then shown the downfall of Coriolanus, who is exiled from Rome. The two meet briefly while Coriolanus is in exile and Du Liniang is in a state between life and death, crossing the borders of the two plays. However, this is the only moment that the two are woven together.

The two plays are presented as one opera, and there are some beautiful performances from the Zhejiang Xiaobaihua Yue Opera Troupe, an all-female troupe from China. The opera is sung in Chinese with English subtitles to the side of the stage. There were times when Chinese audience members were laughing and the humour had not translated to the English subtitles. On occasions the subtitles were out of sync with the action, or did not make sense, which was a shame as well.

The music is quite beautiful, with traditional Chinese instruments used in the orchestral score and very different styles of singing from traditional western opera. In fact, I didn’t realise that there was a live orchestra for a while, all the cast and the music was so over-amplified that it sounded pre-recorded at times. My only criticism of the music was that it was all quite similar, with no distinctive performances.

There were some beautiful costumes, particularly in The Peony Pavilion. Stunning traditional Chinese dress makes the love scenes between Du Liniang and Liu Mengmei even more exquisite. In Coriolanus I found the costumes slightly confusing, as there was quite a mix of time periods represented. It was also a surprise when machine guns appeared in the final few scenes, when throughout there had been only knives as weapons. This may have been intentional, but it felt jarring.

The staging is impressive, with a very large screen covering the back wall of the stage, which quickly and effectively changed the scene. I particularly liked the use of animation to depict the Rome skyline and also the Chinese garden. There was some effective choreography, although at times this was not quite in sync which took away from the effect slightly, particularly in military scenes in Coriolanus.

It was also an incredibly long show, over 3.5 hours, and I have to admit I had become quite restless by the end. This was not helped by the fact that the Peacock Theatre was incredibly warm. It’s rare to have a such hot night in London, but on this occasion it did take away from my overall enjoyment of the show. Nevertheless, this is a beautiful production that makes a welcome change from your usual London fare.