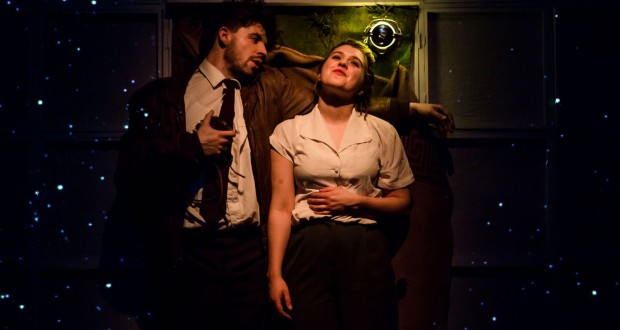 Pros: Excellent physical theatre, with beautifully choreographed movement and a versatile set Cons: A poor script weakens the overall effect Shooting with Light tells the true story of Gerda Taro (Sophie Cullen), a refugee from Leipzig in the 1930s who moves to Paris to escape the rise of Nazism. There she meets the talented but penniless photographer Andre Friedman (Julian Spooner), who becomes her mentor and photographic instructor. He's constantly turned down for work because he's Hungarian, but after mishearing the film director Frank Capra's name in a cinema he changes his own name to Robert Capa. This is&hellip;

An intriguing telling of the careers of two prominent photojournalists, but lacking the spark of emotion.

Shooting with Light tells the true story of Gerda Taro (Sophie Cullen), a refugee from Leipzig in the 1930s who moves to Paris to escape the rise of Nazism. There she meets the talented but penniless photographer Andre Friedman (Julian Spooner), who becomes her mentor and photographic instructor. He’s constantly turned down for work because he’s Hungarian, but after mishearing the film director Frank Capra’s name in a cinema he changes his own name to Robert Capa. This is the key to his success and the pair go on assignment together, both publishing their photographs under his name. Their coverage of the Spanish Civil War earned him accolades and recognition, but her work is forgotten.

A subplot concerns the struggle of Andre’s brother Cornell (Nathan Parkinson) to unearth the mysterious Red Box which the late Andre insisted contains a piece of film of immense importance. Taking place over thirty years, this subplot is somewhat unconvincing, although it does provide a historical perspective on Capa’s work.

The play is performed by the cast of six with great invention and physicality in a mixture of theatre and movement. The physical sequences, from battle scenes to Gerda’s fascination with the act of developing film, are enacted with precision-perfect choreography. Throughout the play the four subsidiary cast members play dozens of roles, from fellow cafe diners to anti-Franco soldiers, both filling in the action and becoming part of the background scenery.

The real star of the show, though, is the set. The back wall consists of 40 foot-square white panels, which perform a myriad of tasks. As well as forming the screen upon which Gerda’s photographs are projected, the panels open in a variety of configurations. The wall becomes the doorway of a Parisian café on a rainy night; two open windows on different floors of an apartment block; a refrigerator; a telephone kiosk, publishers’ offices, and even a rug lying under a starry sky.

The play has a lot going for it, but is let down by a lacklustre script. Devoid of both rhetoric and humour, it’s a plodding and pedestrian piece of writing. The lack of poetry in the words prevents us from fully engaging with the characters; there’s no spark of passion between Gerda and Andre. When Gerda is shocked at his dedication to his craft in the face of mounting conflict, she says: “Stop it, Andre. These aren’t soldiers, they’re people. Families.” To which Andre responds: “Exactly. This is why we’re here. People need to see what we’ve seen.” The play was devised by the cast, but the words the characters speak are an outline for a script; the play desperately needs a writer to breathe life into it.

The ingenuity of the set, the fluidity of the complex balletic movements, the ingenious multi-layered soundtrack and the expert direction are almost enough to carry the 70 minutes on their own. With a better script, this could have been outstanding.