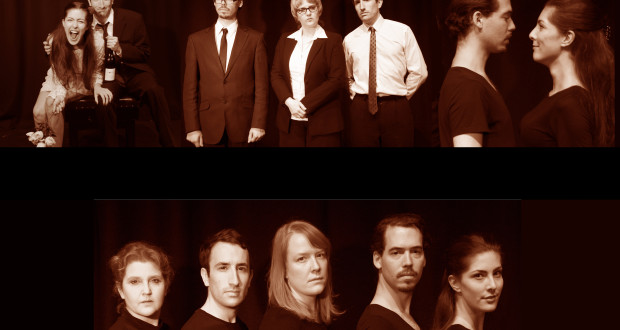 Pros: Some very sharp writing Cons: Some of the costumes looked a bit ‘dressing-up box’ Lunchtime theatre may just be the best thing since the power nap. After a morning of domestic drudgery, just 45 minutes at the St James’ Theatre had me reinvigorated and ready to take on the afternoon. To judge by the relatively full house in the St James’ Studio on that Wednesday, I am a latecomer to this magnificent concept, with which the office workers of Victoria are evidently au fait. First up, Hitched, about a wedding night that doesn’t quite go to plan. The&hellip;

Lunchtime theatre may just be the best thing since the power nap. After a morning of domestic drudgery, just 45 minutes at the St James’ Theatre had me reinvigorated and ready to take on the afternoon. To judge by the relatively full house in the St James’ Studio on that Wednesday, I am a latecomer to this magnificent concept, with which the office workers of Victoria are evidently au fait.

First up, Hitched, about a wedding night that doesn’t quite go to plan. The bride and bridegroom nip off to their suite mid-reception, and when they encounter a bit of trouble in the bedroom, the bride quickly invites her mother, father and bridesmaid to help out. It’s all a lot more innocent than it sounds, and with its innuendo and physical comedy has shades of Carry On, though sadly with fewer laughs.

From pre-coital to post-coital, Insex opens on a satisfied and rather self-satisfied pair of lovers. But despite the hotness of their union, there’s trouble in paradise. Because for him it’s love, for her it’s just sex; he’s moved by what just happened, she’s moved by what’s about to happen. The pipecleaner antennae should have given it away: lovelorn Brad and his vampish lady friend are Praying Mantises, and she has to break the news that she’s about to eat him. The joke could so easily begin and end with this revelation, but what follows is a dark, hilarious and at times philosophical conversation about sexual jealousy and reason versus instinct. Writer Jeffrey Neuman steadily builds the absurdity and manages to mock human foibles as well as insect ones, in this clever, funny play that is almost as deep as it is short.

Then it is off sex, and onto international relations, with The Interpreter. The US and Luketian ambassadors are meeting to discuss airbases. Between them stands the interpreter, played by Amanda Bailey as an anxious, hesitant, middle-aged woman. Her anxiety only increases when the discussion gets underway, and quickly degenerates into a childish slanging match. As she agonises over whether and how to translate the ambassadors’ increasingly colourful insults, the two men turn their fury on her. I’m not sure that the conceit of interpreter as stooge is entirely original, but writer Jonathan Kaufman has rendered it very amusingly here. I particularly liked the Luketian word for ‘missile’ making a sound like a wet lettuce, and the US ambassador confirming that English speakers get down to brass rather than bronze tacks. Bailey’s performance in this role was, for me, the best of the show, but Ben Galpin and Simon Kingsley also put in great turns as the ambassadors, Galpin spouting his guttural Luketian with a patrician sneer.

The final play is a ten minute rendition of Pride and Prejudice, with the five actors multi-tasking as characters, narrator, furniture and horses. This Lizzy and Jane are a bit more brassy and plain-speaking than in the original, and even Lydia goes beyond what’s expected, as she runs her tongue lasciviously up Wickham’s arm. There is a running joke about hurrying up, and having to gloss over various scenes o  bits of exposition; not surprisingly, Mr Collins is frequently cut short! It’s daft and funny, and the cast really throw themselves into it. There are certainly more laughs to be had if you already know the story and the characters, but for that tiny minority who don’t, there’s still plenty to enjoy.

It is a rare treat to find a show that has you laughing out loud almost from start to finish. It’s an even greater treat when it slips in between spreadsheets or laundry, and you can take your own sandwiches! Bite-Size Theatre and the St James’ Studio are really onto something good.