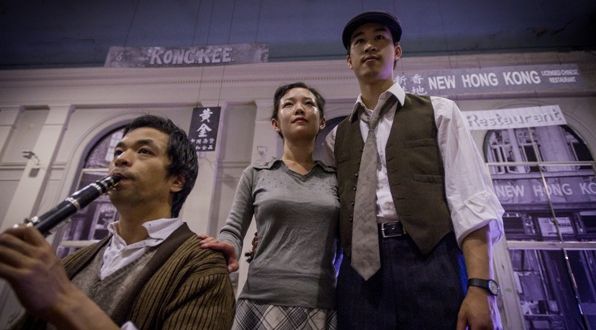 Pros: The characters are wonderful and the play is very funny.

Cons: On a warm summer’s evening like the ones we’ve had this week, the heat in the venue is stifling.
The Last Days of Limehouse, Limehouse Town Hall – Review

Pros: The characters are wonderful and the play is very funny. Cons: On a warm summer’s evening like the ones we’ve had this week, the heat in the venue is stifling. The bustling streets of Chinatown in Soho would have you believe this famous district has been there forever. Yet the hunt for noodles or a sampling of Chinese culture anytime prior to the seventies would’ve meant a trip to Limehouse in the capital’s East End. What’s more surprising is how little evidence remains of this cultural past. Yellow Earth Theatre, supported by Half Moon, are doing their best to rectify&hellip;

This site-specific look at 1950s Limehouse Chinatown is an evocative and entertaining glimpse at a recent but forgotten past.

The bustling streets of Chinatown in Soho would have you believe this famous district has been there forever. Yet the hunt for noodles or a sampling of Chinese culture anytime prior to the seventies would’ve meant a trip to Limehouse in the capital’s East End. What’s more surprising is how little evidence remains of this cultural past. Yellow Earth Theatre, supported by Half Moon, are doing their best to rectify this swift erasure of history by putting on this site-specific performance at the dilapidated, but no less majestic, Limehouse Town Hall.

The Last Days of Limehouse takes us back to the year 1958 and to the redevelopment scheme that threatens the district’s existence. The charismatic and meddlesome Asian-American Mrs Cunningham takes up the cause of saving her childhood home and community. Her campaign to ‘let Limehouse live’ means convincing the largely reticent Chinese residents, who are caught up in more practical and less nostalgic definitions of progress.

Throughout we are introduced to an array of first, second and third generation Chinese immigrants, who are wonderfully realised thanks to strong writing by Jeremy Tiang and superb performances by the cast. The Wong family are the proprietors of a noodle shop who stand to benefit from the move of premises, though pregnant wife Iris, whose mother taught the younger generations Cantonese, is concerned for the potential loss of tradition.

Stanley Lim, the restaurant help whose future hangs in the balance, is the most interesting and complex character. He is haunted by dreams and traumatic memories of the difficult life as a seaman that brought him to Limehouse. Jonathan Chan manages to convey such tenderness in Stanley’s limited expression, a silence typical of a character whose internal life is usually tucked away safely from public view. Amanda Maud is phenomenal as the go-getting but misdirected Eileen Cunningham, who also happens to be a very funny character. Much of the humour derives from the failures in translation that result from the Americanised Mrs. Cunningham’s inability to comprehend the English ways of the people with whom she claims to feel such solidarity. Maud captures both the serious and comic elements of her role well; the show would fall apart without her believable affection and exceptional control over the demanding choreography of this promenade piece.

The performance takes place within the main hall, the audience moving around to accommodate the shifting of locations. The transitions happen naturally, with the crowd being led by smooth lighting changes and at times some gentle ushering from the cast. Evocative images of the district’s present and past are projected onto a screen and there are banners with street names and signs, remnants of the district’s previous life that are still visible in the local area. The period costumes also add to this immersive experience that makes you feel like you have been transported to the tail end of the 1950s.

The overriding obstacle to the enjoyment of this show was the stifling heat in the room on what was a very hot evening. For me however, the meaning of having it in the town hall far outweighs the discomfort from the heat. The entire cast should be congratulated on flawless performances under such tough conditions. The vocals were always clear and crisp, which is unusual for shows where the audience is constantly shifting about.

For those wanting to get into the subject a bit deeper, there is an exhibition about Limehouse Chinatown as you enter the Town Hall. An audio walking guide with an interactive ‘then and now map’ is available at www.limehousechinatown.org. The show is just over the 90-minute mark, but for families with children six years and over there are family friendly performances that are 60 minutes long.

All in all, The Last Days of Limehouse is a finely balanced, well-written and superbly acted play that’s well worth seeing.