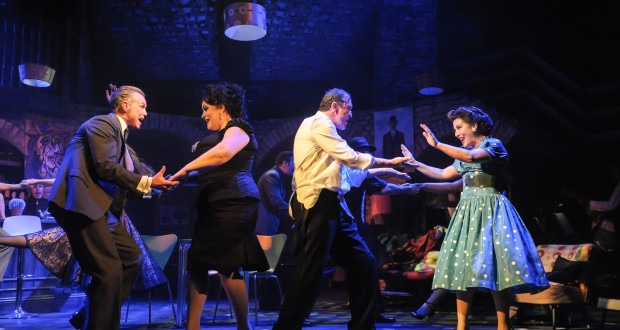 Pros: Witty script, excellent cast, great choreography, memorable songs. Cons: Hard to really find one, however adult themes may be unsuitable for children. The centenary celebrations of renowned director Joan Littlewood’s birth continue with this cracking new production of Fings Ain't Wot They Used T'be, first staged at Theatre Royal Stratford East in 1959. The old red brick theatre glows brighter as you approach it, and you just know something special is going to happen. The first song Goodnight Dearie sets the scene perfectly as the story begins to unfold. Rock ‘n’ roll is dawning and the age of deference&hellip;

A barnstorming update of a musical showcasing the unique talent of Lionel Bart.

The centenary celebrations of renowned director Joan Littlewood’s birth continue with this cracking new production of Fings Ain’t Wot They Used T’be, first staged at Theatre Royal Stratford East in 1959. The old red brick theatre glows brighter as you approach it, and you just know something special is going to happen.

The first song Goodnight Dearie sets the scene perfectly as the story begins to unfold. Rock ‘n’ roll is dawning and the age of deference to our elders and betters are on the wane. The Street Offences Act is about to become law, and the consequences are beginning to dawn on London’s underworld. The action takes place in a 50s Soho bar brimming with gamblers, spivs and prostitutes. It tells the tale of Fred, a loveable rogue who fears his status as gangster no. 1 was lost during his time inside. His long suffering lady, Lil craves a decent existence and wants Fred to marry her. The bar has enjoyed a peaceful co-existence with the police, but PC Collins can see the writing on the wall.

This production takes a reassuringly light touch in dealing with the darker side of life.  Soliciting, gang fights and betting scams all happen outside the walls of the club.  This allows the audience to enjoy the interplay between characters like Betty, the tart with a heart or Red Hot, the burglar who never seems to warm up properly. That doesn’t mean the characters aren’t believable. The author, Frank Norman, himself a convicted felon, breathes truth into the characters. Remarkably, this truth still shines through the gloss added by musical numbers. Joan Littlewood’s original production was heavily improvised, so Elliot Davis was able to devise a script that feels fresh and cheeky without being overly crude. More Lionel Bart songs have been added to lend weight to the story, most notably Fred’s rendition of Living Doll, a heartfelt tribute to Lil.

The songs are typically earthy, humorous offerings, and whilst lacking the refinement of Bart’s later work, they provide a perfect foil for the story. The title song reappears on several occasions during the production, though it never feels repetitive as the lyrics are revised for various characters reflecting on how times have changed. The choreography is smart, slick and visually stunning.  Being a compact theatre, the sightlines lines are remarkably good, and you feel an intimacy with the stage and performers whatever your vantage point.

The casting is nothing short of inspired.  Jessie Wallace is a revelation as Lil and has a strong melodic tone to her singing voice. Mark Arden as Fred carries off the role of bluff, fading hard man with consummate ease. Stefan Booth, sporting an impressive Elvis style quiff glories in the role of Tosh.  His ‘girls’ are equally engaging adding their own unique spark to the story. Gary Kemp gives an excellent turn as PC Collins, while Christopher Ryan’s performance as the bumbling Red Hot is nothing short of brilliant.  You might think the producers have played safe casting pop stars and soap actors but every one is a perfect fit for their role.  The accents are authentically Cockney without being too affected, and you sense the cast are thoroughly enjoying the experience. Joan Littlewood once described Fings as like, “Guys & Dolls only with its flies undone”.  It’s a very apt description.  Whilst it lacks the polish of a Damon Runyon story, it shows heart, guts and a very British sense of humour.  If there’s any justice this show should transfer to the West End.  If not, time is short, so please get to Stratford as quickly as you can.