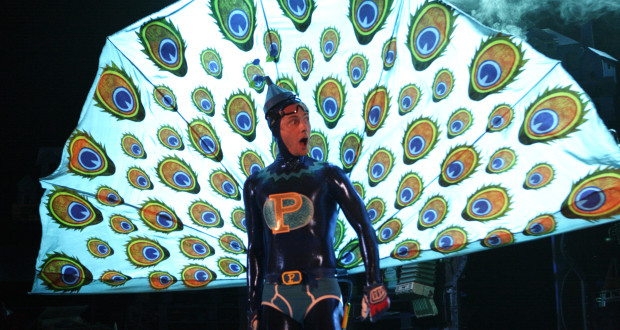 Pros: A brilliant Christmas treat for all the family.

Pros: A brilliant Christmas treat for all the family. Cons: No popcorn allowed in auditorium. How The Whale Became is a truly charming children's Opera, based on the set of children's stories written by poet laureate Ted Hughes. The story focuses on the characteristics of different animals, and how they came to be. The main characters are Girl (Fflur Wyn) and Boy (Andrew Dickinson). Together, they go on a voyage of personal discovery with God, whose 'Making Machine' and assembly yard resemble that of an eccentric inventor's rather than anything sacred! The animals are played by Wyn and Dickinson&hellip;

A marvellous production for the whole family, and a wonderful celebration of opera and theatre. Bravo!

User Rating: Be the first one !
How The Whale Became is a truly charming children’s Opera, based on the set of children’s stories written by poet laureate Ted Hughes. The story focuses on the characteristics of different animals, and how they came to be. The main characters are Girl (Fflur Wyn) and Boy (Andrew Dickinson). Together, they go on a voyage of personal discovery with God, whose ‘Making Machine’ and assembly yard resemble that of an eccentric inventor’s rather than anything sacred! The animals are played by Wyn and Dickinson themselves (Polar Bear/Cow and Bull respectively); alongside Donna Lennard (Frog), James Mcoran-Cambell (Poor thing) and Njabulo Madlala (Whale, Elephant). All singers constantly swap between parts to tell different bits of story, and also take it in turns to play God – a nice, literal illustration of what it is to ‘become’.

Each animal’s costume is created from house-hold items and pieces of pre-existing clothing. The polar bear wears a fur coat, fur hat and sunglasses (she is a glamarous lady); the elephant wears large ears made out of gloves, and a grey sweater with one ridiculously long arm. The theme ties together well visually as well as conceptually, making a play on the notion of theatre itself, as well relating to games children might play themselves at home.

The production starts as the audience entered the auditorium, with singers and instrumentalists onstage tending to the garden, playfully interacting with the children making up the audience. This theme continues throughout the opera, with performers sometimes venturing into the audience, and at other times using the corridors and staircases of the auditorium as additional set. The set itself is complex; the intention, again, is to represent the selection of objects a child might find at home around the house and the garage – wellies with little bushes planted within them, dolls houses, crates, rubber rings litter the stage. Instruments are housed in special sections: a grand piano, another rather broken-looking piano and a percussion section which included flowerpots and olive branches.

As one might expect from such a combination the music included a wide range of very diverse and unusual sounds, although this was in no way off-putting or isolating for the audience or the children. Instead, it adds a rich dimension to an already colourful and interesting score. There was a sound-world tied to each animal, helping the children to connect to the music.

Instrumentalists were used in highly interesting ways, a lot of the time acting on stage with the singers. The violinist (Isla Mundell-Perkins) performed the role of ‘cat’ perfectly, making little high-pitched meow sounds towards the start of the opera (even killing rats with violent, scratchy bowing towards in the middle) but, by the end, had learned to play the violin perfectly, with Boy and Girl recognising and praising her talent.

Vocally, all singers are immaculate, and their acting is also top-quality. Andrew Dickinson gave a highly convincing and somewhat adorable performance as ‘boy’, no doubt learning to articulate the mannerisms of a 5 year old perfectly from strong movement direction by Joseph Alford. Fflur Wyn shone as girl, acting the spoken parts of high-maintenance and extremely glamourous Polar Bear, with a thick America accent. Mcoran Campbell, Donna Lennard and Njabulo Madlala were also strong in their supporting roles.

Overall, I feel this is a highly successful celebration of opera and theatre as an act of collective imagination, with a really strong concept, great music, and an outstanding performance from all. However, the real acclaim and value of the piece of course, lies not in my opinion but in the children it was written for. Children can be the most wonderful audiences, but the cruellest critics! As it happens though, the ROH can take their fingernails out of their mouths – a family conversation I overheard on the way out gave very high praise indeed, even if rapt attention can only last so long: