No need for explanations here, but if you need a laugh then this is the category for you! You’ll find reviews of all the shows that have had us rolling in the aisles on this page.

Twelfth Night Or What You Will, The Rose Theatre – Review 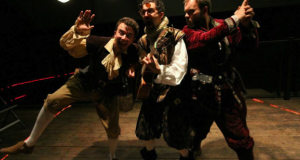 This is an enjoyable and solid production – a good introduction to Shakespeare for those who do not wish to go endure a three hour show.

END_OF_DOCUMENT_TOKEN_TO_BE_REPLACED

William ShakespeareAdapted and Directed by Ricky Dukes★★★★  Pros: The fantastic staging evoking a Venetian carnival with elements from The Godfather filtering through. Cons: The transition from the trial scene to the ending left me aching for a more intense performance on Shylock’s part. Our Verdict: A superbly presented, highly enjoyable and accessible take on one of Shakespeare’s most famous plays. Courtesy of the Brockley Jack Studio Theatre A new adaptation of Shakespeare’s The Merchant of Venice is running at the ...

END_OF_DOCUMENT_TOKEN_TO_BE_REPLACED 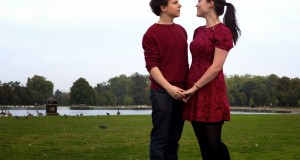 Outrageous and dynamic parody on relationships, dating, marriage and meeting that special person.

END_OF_DOCUMENT_TOKEN_TO_BE_REPLACED

Katerina Vrana Presented by Angel Comedy ★★★★★ Pros: Stand Up doesn’t get better than this. Intelligent content; expertly crafted humour; deliciously responsive audience dynamic and performance skill so good it actually hurts a little bit.Cons: Guilt. She’s not charging for this show. Verdict: I’ve seen a *lot* of stand-up comedy and Vrana’s set is one of the cleverest, funniest most skilfully delivered shows I’ve seen, ever. Courtesy of Angel Comedy Katerina Vrana’s stand up comedy set, Feta with the Queen, ...

END_OF_DOCUMENT_TOKEN_TO_BE_REPLACED

The Way You Tell Them, Camden People’s Theatre

Written and Performed by Rachel Mars Part of the Beyond the Joke Festival ★★★ Pros: Thoughtful and relevant subject matter delivered by a charming performer. Cons: Not all elements come together well, and several moments feel forced or contrived. Our Verdict: Not the feel-good romp it might initially seem, but a worthwhile and well-delivered exploration of the role of comedy. Courtesy of Rachel Mars Many people argue that irreverent humour is the most interesting, and while individual taste makes this ...

END_OF_DOCUMENT_TOKEN_TO_BE_REPLACED

Richard BeanDirected by Nicholas Hytner★★★★★ Pros: Easily the funniest show in town, different-in-a-good-way to the original, Owain Arthur is ridiculously good, The Craze are still playing the music. Cons: None. Except for the fact that it gets out at the same time as Phantom of the Opera, forcing you to share limited pavement space with so-called ‘Phans’! Our Verdict: Still at the top of it’s game, it remains the must-see show in London. Courtesy of Alistair Muir for the Daily ...

END_OF_DOCUMENT_TOKEN_TO_BE_REPLACED

Richard Bean, based on The Servant of Two Masters by Carlo Goldoni Directed by Nicholas Hytner ★★★★★ Courtesy of National Theatre Richard Bean’s One Man, Two Guvnors, based on Carlo Goldoni’s Commedia dell’arte classic of The Servant of Two Masters, has been one of the most eagerly anticipated productions of the National’s current season. It reunites Nicholas Hytner with James Corden for the first time since Hytner’s outrageously successful production of Alan Bennett’s The History Boys catapulted Corden into the ...