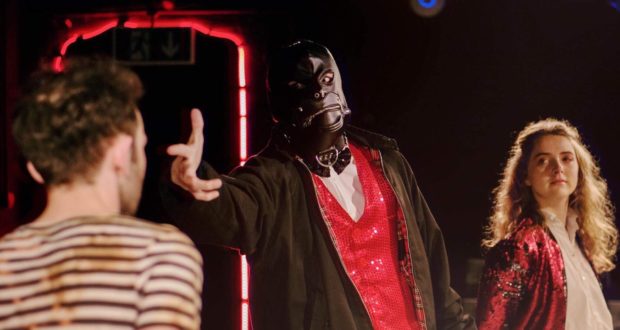 The Pitchfork Disney, Philip Ridley’s debut 1991 play, aims to do two things. Firstly, to disturb the audience (it was credited with introducing “in-yer-face” theatre following its 1991 debut) and secondly, to leave you questioning what it was all about.&nbsp; Somna Theatre Company, clearly working on a shoestring budget, make a good effort to do both in the small confines of the Upstairs Theatre at Oval House. From the moment we enter our two siblings, Presley and Haley Stray (Pip Williams and Hannah Madison) are already present. Hannah is fidgeting on the less than clean looking sofa, whilst Presley&hellip;

A fine attempt at a difficult play, The Pitchfork Disney may not deliver all the tension it promises, but it is nonetheless still worthy of praise and leaves the audience questioning.

The Pitchfork Disney, Philip Ridley’s debut 1991 play, aims to do two things. Firstly, to disturb the audience (it was credited with introducing “in-yer-face” theatre following its 1991 debut) and secondly, to leave you questioning what it was all about.

Somna Theatre Company, clearly working on a shoestring budget, make a good effort to do both in the small confines of the Upstairs Theatre at Oval House. From the moment we enter our two siblings, Presley and Haley Stray (Pip Williams and Hannah Madison) are already present. Hannah is fidgeting on the less than clean looking sofa, whilst Presley is standing on the edge of the performance area, clearly agitated, hands in constant motion, almost clawing at his own skin.

Once proceedings begin, the agitation doesn’t cease. Both Presley and Haley squabble like children, arguing over chocolate or whose turn it is to go to the shops. Alone in the house, they tell each other stories, each more extreme than the last. The one constant throughout though is the bleakness, the desolation, from Haley’s tale of being chased by rancid dogs to Presley’s talk of the destruction of everything except their own home. What’s most disturbing is how they take comfort in such darkness, treating the stories almost as fairy tales.

The introduction of Rose Reade’s Cosmo Disney brings contrast to what has gone before. Where the siblings are dirty, drab and innocent, Cosmo brings perfection, colour and realism into the cramped environment of the flat. The choice to cast a female to play the male role is interesting, and whether it was to deliberately confuse the audience is probably open to debate.  Reade though pulls it off wonderfully, her laddish style disconcerting to both Presley and the audience alike.

The tension isn’t quite as oppressing as you might hope, given the play’s content, partly no doubt because what was shocking in 1991 isn’t quite so now. The laughter that many shocking lines produce has the effect of lessening the tension. There are efforts to ramp it up. Some work, such as the background sound throughout (credit to Robbie Heath and Ellen Kruger for that), while some tricks fail, the flashing images on the wall behind the actors are just confusing and really don’t add to the overall effect. And whilst the performance area is tightly surrounded by the audience, it might have been better to reduce the space even more to add to the claustrophobic feeling.

It’s only when Pitchfork Cavalier enters, late on, that the tension is notched up to a level that maybe should have been present previously.  Ross Kernahan is given free range to play Pitchfork completely over the top, but given he performs in a gimp mask, anything less would surely be a discredit to the character.

However, even without the level of tension hoped for, this is still a fine production of a play that leaves the audience with so many questions come the end. Because what The Pitchfork Disney is trying to say is very much open to interpretation; that was clearly Ridley’s intention, and thankfully this production makes no effort to explain, instead leaving it to the audience to debate for themselves. Was it all just another nightmare in Presley’s mind, or is the suggestion maybe that suggesting we, the audience, are voyeurs, that whilst we may never admit it, we are most thrilled by the macabre.  Or maybe it something else entirely?  On that level this production comfortably achieves the second aim of the play, because long after the final scene I am still questioning what it was all about, but am glad to have had the experience.