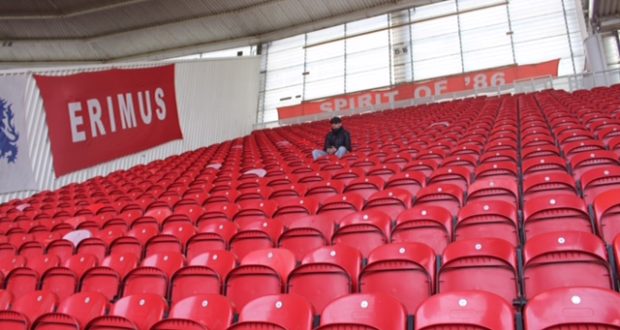 Pros: An intense and compact drama, the scope of which explores a lot more than just The Beautiful Game.

Pros: An intense and compact drama, the scope of which explores a lot more than just The Beautiful Game. Cons: Some choices aren’t clearly defined enough to fully realise the script’s potential. Liverpool legend Bill Shankly is often quoted as having said “Some people believe football is a matter of life and death. I am very disappointed with that attitude. I can assure you it is much, much more important than that.” In John Hickman and Steve Robertson’s Deadline Day, football’s impact on lives is brought to the foreground. A bad result can ruin your weekend; a bad season can&hellip;

While it’s not Champions League material, this is an entertaining show despite a few shots veering off-target. Worth catching.

User Rating: Be the first one !
Liverpool legend Bill Shankly is often quoted as having said “Some people believe football is a matter of life and death. I am very disappointed with that attitude. I can assure you it is much, much more important than that.” In John Hickman and Steve Robertson’s Deadline Day, football’s impact on lives is brought to the foreground. A bad result can ruin your weekend; a bad season can ruin your year. Losing on Derby Day could ruin your life. All the while, at the top level of English football the disconnect between fans and their respective clubs grows wider, while ticket prices and players’ wages continue to rise. This is fertile ground for theatre.

The main action of the play takes place in the back of a car being driven from Newcastle to London (specifically, Stamford Bridge) in the final hours of the football transfer deadline day. In the front, driving, we have Trevor (Mike Yeaman), a passionate but disaffected NUFC supporter. In the back, there’s footballing protégée and local hero Danny Walters (Tevye Matheson) on his way to sign for Chelsea, along with his pushy agent Rachel (Victoria Gibson), who’s brokering the deal. Trev’ has decided to “make a stand”, by pulling up on the side of the motorway and locking the car, in a bid to prevent star player Danny from completing the signing and leaving his own beloved club.

It’s a punchy script and a compelling story. However, the production itself occasionally lacks the clarity needed to do it justice. Despite the setting, characters move around the stage freely, which is confusing at first – initially it just seemed like they were in an especially spacious car – though the decision to free the actors from the confines of the vehicle was probably the right one. Unpredictable lighting states add to a sense of confusion, while poorly defined interludes depicting a Soccer Saturday-esque football chat show come across as more Chris Kamara than Jeff Stelling.

The performances are strong for the most part. Yeaman expertly conveys the constant frustration of a disenchanted football fan (he also has a masterful grip on accents) while Victoria Gibson shows flashes of a young Julie Walters in her role as Danny’s agent. Matheson, in what is his professional debut, does well, capturing some of the vulnerability – and naivety – of an emerging football superstar making the first big move of his career. At times all three do verge on the melodramatic, though this is perhaps as much the fault of the writing as it is of the actors. Additionally, there are moments when the examination of the North/South divide is pronounced most strongly when a couple of the performers’ accents flit between the two, seemingly at random.

There is a lot to like about Deadline Day, and at a mere 50 minutes in length I wouldn’t have minded seeing a bit of second-half action. Ultimately, though, on this rainy Tuesday night away from home, I did feel slightly like I was watching my own North-East side, Sunderland (though admittedly with among more spectators): earnestly willing the players on, but dismayed by a series of unforced errors and the occasional own goal.