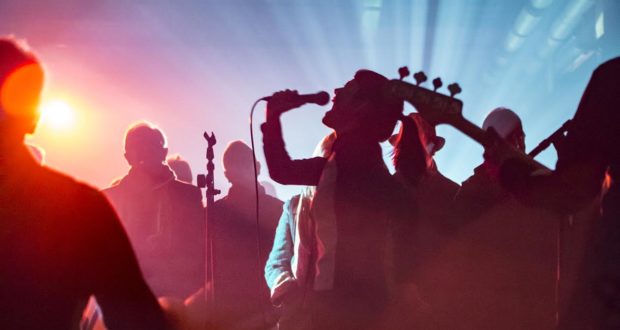 Pros: Striking visuals and superb music combine within a fascinating space you’ll probably never get to visit again. Cons: This isn’t for the faint-hearted. Expect loud sounds and dimly-lit, sometimes claustrophobic, spaces in this mostly-standing show. At the start of our group’s journey into the roof of The Royal Festival Hall, one of the performers of Klanghaus: 800 Breaths stopped us on the stairs and took the pulse of an audience member. “Groovy”, he said. The pulse was “in time.”  Over the course of the next hour or so, my own heartbeat would vary massively, not least after the same performer stated,&hellip;

An absolutely outstanding multi-sensory promenade performance, and whether you love it or not, it’s unlikely you’ll ever have experienced anything quite like this before.

User Rating: 4.5 ( 1 votes)
At the start of our group’s journey into the roof of The Royal Festival Hall, one of the performers of Klanghaus: 800 Breaths stopped us on the stairs and took the pulse of an audience member. “Groovy”, he said. The pulse was “in time.”  Over the course of the next hour or so, my own heartbeat would vary massively, not least after the same performer stated, ominously, that there’s “enough iron in the human body to make a coffin nail,” before leading us into the murky upper reaches of this enormous building.

Describing itself as a “multi-sensory encounter of shifting sound, colour and light,” it’s not surprising that 800 Breaths is a show which escapes definition. But as ‘encounters’ go, this is unforgettable; rock band The Neutrinos and Sal Pittman have created something genuinely extraordinary.

On entering the first space, the audience of this promenade performance was confronted with music pulsing from nooks in between the iron-grey machinery surrounding us. One musician pounded drums hanging from the ceiling, while another sent out a bass-line from what appeared to be an oversized air-vent, as a myriad of projections flickered across the walls.

Initially there was a sense of unease among the group as we tried to get our bearings and work out if and where we were supposed to move on to, before one of the black boiler suit-clad performers beckoned us forward into the next space. The performers and stewards did an excellent job of guiding audience through this murky and metallic labyrinth so there was no fear of going the wrong way, although I somehow managed to anyway. All the while new sounds and songs drew us into new places filled with new imagery as the musicians shifted snake-like from room to room, at times among the audience, at others obscured by the various surrounding vents and machinery.

There’s brilliant musicianship on display throughout the performance, and coupled with sight, smell and even touch, the Neutrinos’ songs became totally immersive. At one point I realised I’d been dancing for quite a long time without noticing. It’s ironic, though, that perhaps the most calming piece of music is performed in the most claustrophobic of the spaces, with the audience and musicians almost sitting on top of each other. Despite this, by the time 800 Breaths ended I was left with a palpable feeling of serenity.

Klanghaus: 800 Breaths is an extremely difficult experience to describe; I can only advise that you try your best to catch it before the run ends on 23rd July. It’s bizarre, exciting, and wholly original; when it comes to this show, feeling is believing.