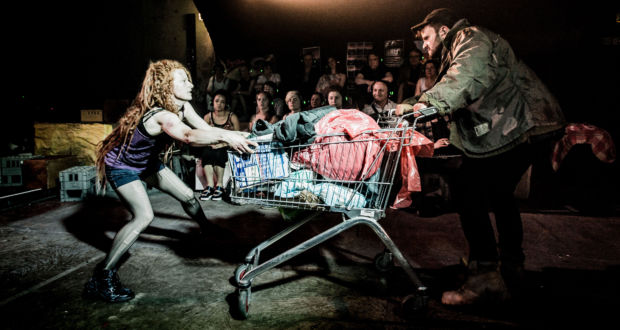 Pros: Tremendous performances, seamless blend of live and recorded music, impressive locations. Cons: Cramped wait before the opera starts. It's an inauspicious start. You're standing around in a hot, crowded bar for nearly half an hour, having been told to turn up at 7.30 for an 8pm kickoff in order to collect your headphones and be instructed in their operation. Through the crowd threads a small band of musicians – flute, violin, clarinet, sax and melodica – carrying a bucket for the homeless charity Crisis and offering to play any song for a quid. The mood changes as the&hellip;

It’s an inauspicious start. You’re standing around in a hot, crowded bar for nearly half an hour, having been told to turn up at 7.30 for an 8pm kickoff in order to collect your headphones and be instructed in their operation. Through the crowd threads a small band of musicians – flute, violin, clarinet, sax and melodica – carrying a bucket for the homeless charity Crisis and offering to play any song for a quid.

The mood changes as the music takes on the spiky tones of the overture to Leoš Janáček’s 1924 opera The Cunning Little Vixen. The tall, imposing figure of the Forester, played with great physical presence by Ivan Ludlow, appears and, joking with the audience, punctuates speech with snatches of opera, amplified through the headphones. Then, weaving her way through the crowd, comes the diminutive figure of Vixen – frail, with a great mass of tangled red hair and torn clothing. But this is no woodland animal, as she is in Janáček’s original; she’s a homeless young girl, begging the audience for spare change and shelter. The Forester, offering her a room for the night, takes her to his home.

And so the audience follows, parading through a corridor lined with posters for missing persons as statistics on their disappearance are fed to us via our headphones. We’re shown to the Forester’s home, which manages to give the air of a cosy living room and kitchen, despite being scattered with enough armchairs, sofas and cushions to seat the audience of well over 100.

Here the opera proper begins. Rosie Lomas, as Vixen, reveals herself to be a powerful and engaging soprano, despite her tiny frame. The musicians become the Forester’s family, and bicker as the sons try to molest Vixen. ‘Come on girls!’ she sings, in director Daisy Evans’ contemporary translation of the text. ‘Suffragettes! Stand up for your values!’, to which the sons comment: ‘What a stupid bitch.’

Vixen, overwhelmed by the attention, grabs the Forester’s wallet and runs off into the night. The audience follows her for Act Two, set in a cardboard city under the arches of a railway station; the setting of The Vaults has never been more appropriate. At the far end of the cavernous space, the raked steps which form the bulk of the seating area are also the hill leading to the Forester’s house, and the action takes place in and between these locations.

Throughout the show, live music from the band, scattered among the audience, is seamlessly mixed with a prerecorded orchestral track, with both being beamed straight into your headphones – along with the voices – at surprisingly high quality. The musical arrangement, by Max Pappenheim and musical director Stephen Higgins, captures and updates Janáček’s sometimes challenging score perfectly, the discordance perfectly suiting the new setting and libretto.

Where the original opera deals with woodland creatures, this adaptation is concerned with fragile wildlife of an altogether more human nature, as the experience of homelessness is explored with sensitivity and passion. The Forester complains to his friends of the Girl with the Vixen Tattoo; we first meet Vixen’s future boyfriend, an engaging tenor played by Robin Bailey (‘My friends call me Dog Fox – stupid nickname, I know’), as he’s handing out sandwiches to the ‘homeless’ members of the audience sitting on the steps.

This is a tremendous take on a classic opera, brought thoroughly up to date in a blistering commentary on society’s attitude towards homelessness. Performances from the two principals, as well as the versatile cast of musicians/singers, are all spot-on, and Kitty Callister’s design for the two locations is ingenious.

This is the kind of show that gives fringe theatre a good name; I’ve never seen opera as fresh and engaging as this even at Covent Garden or the Coliseum. Even if you’re not an opera fan, you can’t help but relish this thought-provoking and hugely entertaining performance.