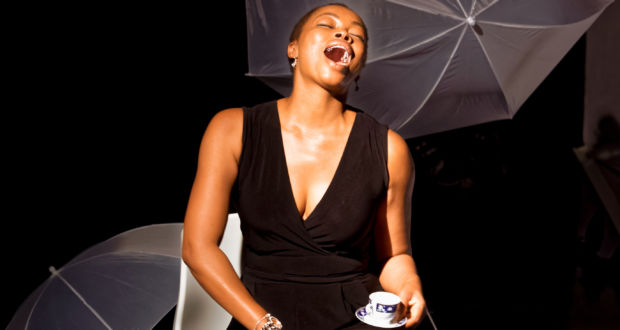 Pros: Enthusiasm. I laughed on occasion.

Pros: Enthusiasm. I laughed on occasion. Cons: No clear narrative or style. Stereotypical characters bordering on offensive. Disjointed, poorly constructed, and confusing to the point of boring. I've seen some amazing shows at Ovalhouse. It's one of my favourite venues. Welcoming, atmospheric and geographically encouraging. Under normal circumstances I'd recommend you check out what they have to offer. Sadly, as you might have guessed from the star rating, that's not the case on this occasion. Identity Crisis precipitated my first journey to the upstairs theatre at Ovalhouse (they have two). It's an intimate space, ideally suited for personal narratives.&hellip;

A one-woman vanity project that suffers from its own identity crisis.

I’ve seen some amazing shows at Ovalhouse. It’s one of my favourite venues. Welcoming, atmospheric and geographically encouraging. Under normal circumstances I’d recommend you check out what they have to offer. Sadly, as you might have guessed from the star rating, that’s not the case on this occasion.

Identity Crisis precipitated my first journey to the upstairs theatre at Ovalhouse (they have two). It’s an intimate space, ideally suited for personal narratives. I was poised, therefore, for a night of excitement. An opportunity to look behind the curtain of high fashion glamour; to see the seedy underbelly through the eyes of one who’s lived it; to observe the ramifications of an intrusive press after the death of a loved one. What I experienced, conversely, was the theatrical equivalent of being shown holiday pictures by your great aunt for an interminable length of time.

When creating a show essentially about yourself, the central conceit is that an audience will find you as interesting as you do. To consider her own life worthy of theatrical attention, therefore, is to show remarkable and admirable confidence on the part of Phina Oruche. One danger with a one-person show involving multiple characters is that an audience may become confused. In fairness, Oruche displays an impressive array of accents and her characters are well differentiated. However, they rarely interact with each other in a meaningful way. Characters often appear more as stereotypes than as thinking, breathing individuals with dreams and desires; even the character of herself.

The show is simply set. A projector, a screen and some props. Moving from scene to scene is accomplished quickly and with aplomb.

Being as generous as possible I shall examine the plot. There isn’t one. Apart from a brief period covering the death of her niece, Oruche conducts a journey through her life, seemingly from conception to death.  The projections splayed across Oruche’s frame undermined the impact of the opening minutes. We witness – and are invited to admire – 60 photographs from throughout Oruche’s life and career. She introduces each with faux self-deprecation, belied by constant name-dropping and reminders of her success. Whilst these are undoubtedly impressive, their theatrical merit is debatable. Characters surface, speak, and are forgotten.

Ironically for a show named Identity Crisis, it has no idea what it wants to be. At times the audience is addressed, at times ignored. At times the characters interact, at times they exist in their own universe. Oruche is strongest when she interacts with the audience and displays some likeable qualities. However, there is nothing personal in this play. I felt as if I was watching Oruche read aloud a Wikipedia entry about and written by Oruche.

The less one likes something, I feel, the more important it is to justify that position. Creating a piece of art takes a lot of time, effort and energy, and this must be appreciated. That said, there is an air of exploitative cynicism about this piece. It has all the hallmarks of an actor showcasing herself to an industry that has forgotten her name. ‘Remember me?’, it shouts; ‘I’ve done X,Y,Z and I’m still here.’ If nothing else, Identity Crisis stands as proof that just because one has a high enough profile to make a show, doesn’t mean they are a show.

Previous: No Place for a Woman, Theatre 503 – Review
Next: The Duchess of Malfi, Saint Giles-in-the-Fields – Review