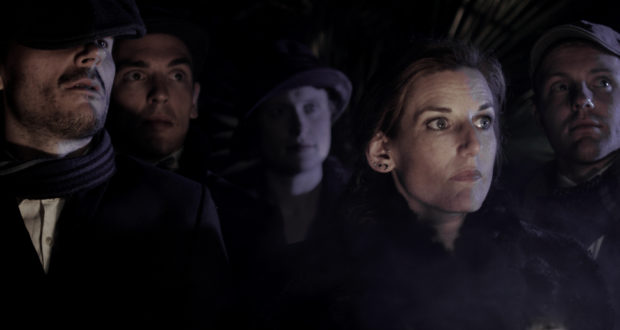 ‘Benighted’ Playwright Duncan Gates on the Process of Adaptation

J.B. Priestley’s 1927 novel Benighted, and the 1932 movie The Old Dark House that followed it, was perhaps the first-ever ‘haunted house psychodrama’ tale. In the 90 years since the book’s debut, Priestley’s tale of Welsh travelers who seek refuge on a dark and stormy night has gone on to inspire the Rocky Horror Picture Show and countless similar tales. Now, however, Priestley’s original tale will finally make its way to the stage, thanks to a new adaptation at the Old Red Lion Theatre. In this guest blog, Benighted playwright Duncan Gates discusses the process of adapting Priestley’s novel for the stage and passes on some of the lessons he’s learned in the process.

I have in the past been quite cynical about theatre adaptations, so creating one has been… interesting. I’d always been a fan of the 1932 James Whale film The Old Dark House, and it seemed bizarre to me that, with its vivid imagery and the backdrop of the Femm house’s imposing great hall, the film had never been a Mousetrap-esque West End smash.

Obviously this is 2016, and you can’t just write a big cast, pros-arch epic off-hand any more. You need to be more imaginative, especially when you know the ‘origin space’ will be a black box above a pub — albeit one of London’s more ‘characterful’ ones. On top of this, I was adapting the bleaker, more introspective short novel on which the film is based, J.B Priestley’s Benighted.

This was lesson 1 on the process of adaptation: What are you trying to do that doesn’t already exist? The camp thriller element of Old Dark House had already been amp-ed up into Rocky Horror, leaving the moody character study out in the cold. By happy chance, this moodier aspect happens to be better-suited to the space than a ‘classic’ West End spectacle.

Lesson 2: What problems exist with the source material, and how are you fixing them? Benighted was Priestly’s second published work, and it’s completely okay to suggest that he hadn’t yet perfected his style or the clarity of his themes. Balancing your necessary respect for the author with the confidence to say ‘I think their intentions would have been better served had they done this’ is one of the biggest and most exciting adaptation challenges. You’ll never have that conversation with yourself about your own work, so make sure you embrace it now — not least because you’ll feel more ownership of the version you’re creating.

If that sounds like fun, beware of lesson 3: How can you prove you’re not shitting over someone else’s idea? The Ghostbusters remake, for instance, would have been genuinely ill-advised had it not been about people busting ghosts. Changing those people from all male to all female arguably doesn’t affect the premise in any way (unless Ghostbusters has a Hemingway-style masculinity undertone that everyone has missed). In fact, it shows the strength of the original material that it can be re-imagined years after and remain powerful in the same way.

Also: A world where society doesn’t change and enable artists to reflect on the structural problems earlier ones encountered and/or embodied (‘women aren’t as funny as men’, ‘working class people are savage’, etc) would obviously be pretty rubbish.

For another way to make sure you’re not accidentally shitting over someone else’s idea, be aware of lesson 4: Are you rewriting in your own voice when you could let the original text speak? This is really as simple as getting to the end of your new version of King Kong and avoiding the temptation to change ‘it was beauty killed the beast’ to something more in your own voice. Like wearing a comedy tie to someone else’s wedding, it’s a bit disrespectful … and literally everyone will notice.

In light of that, lesson 5: Is the text still coherent? I.e. — Does it retain the intentions of both the original author and you? It’s surprisingly easy to stumble over this, especially when you’ve included a smashing bit of original text which you suddenly realise is at odds with what you thought you were trying to say at the start. If, as per lesson 2, you end up having to choose, just remember: You ought to be able to own whatever you’ve chosen to do.