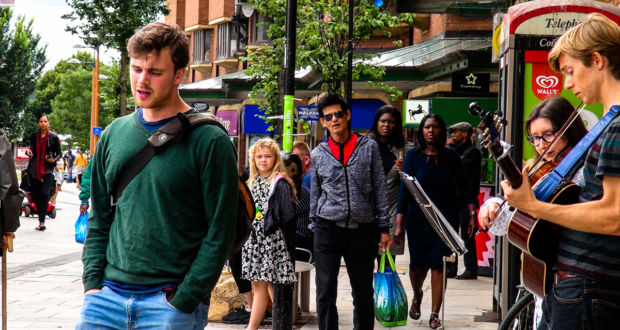 Pros: Brilliantly clever staging around Dalston Square with a fountain and a bus stop acting as the perfect performance spot.

Cons: If you’re looking for a huge orchestra, then the two-handed musical accompaniment isn’t for you.
Drifting Dragons, Arcola Theatre – Review

Pros: Brilliantly clever staging around Dalston Square with a fountain and a bus stop acting as the perfect performance spot. Cons: If you’re looking for a huge orchestra, then the two-handed musical accompaniment isn’t for you. The Bard himself, Mr. William Shakespeare is responsible for writing the famous line ‘All the world’s a stage…’ But it is Baseless Fabric Theatre that have taken the analogy quite literally with their operatic promenade performance of Drifting Dragons, which is part of the Grimeborn Festival at the Arcola Theatre. Having been told to meet in Dalston Square, I had little idea of&hellip;

This site-specific piece offers simplistic opera in a great location with good performances from all.

The Bard himself, Mr. William Shakespeare is responsible for writing the famous line ‘All the world’s a stage…’ But it is Baseless Fabric Theatre that have taken the analogy quite literally with their operatic promenade performance of Drifting Dragons, which is part of the Grimeborn Festival at the Arcola Theatre.

Having been told to meet in Dalston Square, I had little idea of what was about to happen. I wasn’t even sure who the rest of the audience were, who were merely passers-by or who were just café goers enjoying a mid-afternoon bite in one of the eateries. With only the two musicians offering a clue as to where the performance was to be played, it was quite a shock when an ordinary looking couple drinking coffee at an outside table in one of the cafes began singing.

With a cast of just three, the audience were taken on a physical journey around Dalston Square and its surrounding areas. Following the musicians and actors, we traveled from place to place for each scene, with the bus stop, the fountain and the coffee shop providing the perfect stage.

The story follows Sadie (Felicity Buckland), Jason (Louis Hurst) and Dan (Nicholas Morton) as they all try to come to terms with some life changing news. Jason, Sadie’s best friend, is just about to become a father and Dan, her boyfriend, is about to be published for the first time so the news really couldn’t have come at a worse time. There are strong performances from all of the cast both characteristically and vocally. Louis Hurst is particularly good as the mood-lightening Jason, bringing a touch of comedy and a wonderful baritone voice to the operatic trio.

Truthfully, I am not particularly an Opera enthusiast, so an afternoon of Italian song was quite daunting to me. However, composer Greg Harradine has put together a simple score that keeps in time with the modern plot-line and makes it enjoyable for all. The simplicity of the music allows us to focus on the emotional content of the story whilst still being able to enjoy the beautiful operatic voices. Harradine on guitar and Julia Stone on violin accompany the trio well, but it might have been nice to have an extra instrument or two, just to give it a little more power.

The staging of this production, directed by Joanna Turner, is fantastic. It is just as interesting to watch the people around as it is to watch the performers themselves. I particularly enjoyed the reactions of the two unsuspecting girls sat next to the performers at the beginning of the show. They had come out to have lunch, but were also treated to a rather intimate opera performance. Many people joined the crowd as the performance progressed and by the end, they had built quite an audience.

Due to the surroundings and the noises of the area, there are times when volume is lost completely but a reshuffle in where you’re standing works just fine. We can hardly blame them for a fire engine going past or the wind being too loud.

Baseless Fabric Theatre have created something really special by using the stage around us and opera to dramatize modern stories that some of us face every day. Though just an ordinary London street, it was as if the places had been built especially for this performance. At just 50 minutes long, it was a perfect amount of time to be fully engaged and excited to see where we were going next.

This is a unique company that create unique experiences by keeping it simple. I will definitely be keeping an eye out for their future works.