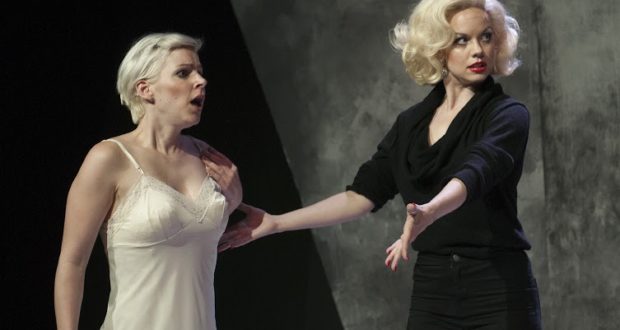 Pros: An intriguing premise which allows us a glimpse at the lesser-known aspects of Marilyn Monroe’s history. Joanne Clifton spellbinds with her note-perfect portrayal of the icon at her glitzy best.

Cons: The production’s narrative-heavy plotting lacks drive, whilst much of the musical score fails to excite. Shaky accents and sketchy characterisation let some cast members down.
Norma Jeane The Musical, LOST Theatre – Review

Pros: An intriguing premise which allows us a glimpse at the lesser-known aspects of Marilyn Monroe’s history. Joanne Clifton spellbinds with her note-perfect portrayal of the icon at her glitzy best. Cons: The production’s narrative-heavy plotting lacks drive, whilst much of the musical score fails to excite. Shaky accents and sketchy characterisation let some cast members down. Marilyn Monroe is, for obvious reasons, metaphorical catnip to musical theatre producers. Psychiatric wards? Not so much. Put the two together, though, and you get… one hell of a 90th birthday party. Opening during the week in which Marilyn would have turned&hellip;

Meet Norma Jeane… and the voices in her head. They’ll hook you in, but might leave you wanting more.

Marilyn Monroe is, for obvious reasons, metaphorical catnip to musical theatre producers. Psychiatric wards? Not so much. Put the two together, though, and you get… one hell of a 90th birthday party. Opening during the week in which Marilyn would have turned 90, Norma Jeane explores the four days she spent in the Payne-Whitney Clinic in February 1961, 18 months prior to her death.

Former Strictly pro Joanne Clifton is billed as the production’s star attraction, so it was a surprise when the dishevelled, protesting figure that hustled through the stark, forbidding set’s ‘cell’ door as the show began turned out to be another actress. This, it emerges, is the ‘real’ Norma Jeane, whilst Clifton her all-singing, all-dancing alter-ego, is ‘Miss Marilyn Monroe’. As the play progressed, we were introduced to the other star players who, apparently, commingle in Norma Jeane’s mind when she fails to receive her usual medication: from foster mother to first husband. We are even, at one point, introduced to a third Marilyn, in the shape of the teenage Norma Jeane.

Whilst this device allowed us to delve into darker, lesser-trumpeted aspects of Monroe’s story, it also made things very narrative-heavy at times; it was more like a history lesson. The songs were on the whole unexciting (sample lyric: “Norma Jeane, why are you so mean?”) and the absence of live musicians was disappointing. However, a handful proved poignant and, or comic, with ‘I Am Miss Marilyn Monroe’, performed as a duet by Norma Jeane and her glittering alter-ego, and, later, by the entire ensemble, a particular treat.

Sung, spoken or unspoken, the interactions between the two (and occasionally three) Norma Jeanes were reliably compelling. Clifton’s attempts to covertly remodel her dowdy protégé (the real Norma Jeane, who appears to have forgotten how far a pout and a wiggle can get a girl) were comic high points. In fact, her sparkling portrayal was never less than pitch perfect – physically, vocally and spiritually, she embodied Marilyn. The dance routines were, of course, spot on, my only criticism being that they were too few and far between. Unfortunately she struggled to project her singing voice, which, from what I could make out, is really rather good.

Audibility notwithstanding, Clifton set the bar high. Sadly, it’s to a height the rest of the cast failed to jump. It would have been nice to see more of Ruth Betteridge, who put in a sweet performance as the teenage Norma Jeane and proved to be the vocal standout with a stunning solo performance. More generally, though, accents and believability began to falter as the plot slowly ground to a halt.

This attempt to mine a rich, largely untapped seam of Monroe’s personal history dishes up the bones of an extremely interesting production. The minimalistic set (containing nothing but a hospital bed) provided a blank canvas onto which fantasies (both Norma Jeane’s and our own) were effectively projected.

However, Clifton and Betteridge’s performances aside, execution fell short of potential. A haphazard, ‘it’ll do’ ethos seemed to extend from songwriting, character preparation to costuming (a white dress, more joke shop novelty than custom-made replica, was hastily readjusted as it is passed to and fro amongst the leading ladies). Meanwhile, a golden opportunity to explore Monroe’s complex inner world was largely lost to a myopic focus on narrative which failed to emotionally engage. But you can’t say fairer than three Marilyns for the price of one – and Clifton’s is as close to a living, breathing evocation of the twentieth century’s most enduring icon as you’ll ever get.