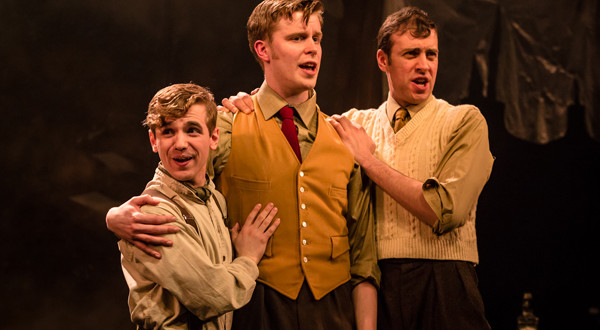 Pros: If you’re a fan of old American drama and catchy songs, this is for you.

Cons: The 105 minute run, without an interval, can seriously challenge your attention span, especially combined with the lack of props or costume changes between scenes.
Road Show, Union Theatre – Review

Pros: If you’re a fan of old American drama and catchy songs, this is for you. Cons: The 105 minute run, without an interval, can seriously challenge your attention span, especially combined with the lack of props or costume changes between scenes. Road Show is the final outcome of the union between Stephen Sondheim’s music and lyrics and John Weidman’s book. Originally called Wise Guys at its 1999 premiere, then rewritten and retitled Bounce in 2003, it eventually acquired its current format in 2009. Road Show is the story of the Meisner brothers, their difficult life paths and the&hellip;

A musical play about two meandering lives, which has a meandering past of its own.

Road Show is the final outcome of the union between Stephen Sondheim’s music and lyrics and John Weidman’s book. Originally called Wise Guys at its 1999 premiere, then rewritten and retitled Bounce in 2003, it eventually acquired its current format in 2009.

Road Show is the story of the Meisner brothers, their difficult life paths and the mishaps occurring every time these paths cross. Wilson (Andre Refing) is an enterprising young man who convinces his brother to go with him on a mining expedition in the far West. Addison (Howard Jenkins) is a devoted boy who puts away his initial doubts to follow his older sibling. The first months are pretty hard and, in a poker round, Wilson decides to swap the claim with a saloon, while Addison grabs part of their fortune and runs away in disappointment. In the next decade we witness all of Addison’s defeats, while Wilson leads a life of excess which will repeatedly end in self-destruction. The disgraced pair seem to be unable to abandon their rocky road and little help is brought by the sweet friendship between Addison and Hollis (Joshua LeClair). Mama Meisner (Cathryn Sherman) and Papa Meisner (Steve Watts) support their children’s adventures around the world. The latter spends most of the play in the background but, every time the spotlight hits him, he fills the room with his powerful voice.

The plot is interesting but lacking in depth. The drama thrives with events, but the details are given away hastily. After an hour, an unlikely homosexual affair is used to revamp the audience’s interest; it works momentarily, but doesn’t last long enough to really enjoy it. The next episode adds even more elements to the plate, which made me wonder why director Phil Willmott didn’t insert an interval. I think a break would have improved my ability to focus on the final part.

The Union Theatre applies a ‘first come, first served’ seating policy. At my arrival I was given a numbered tag, before being invited to enter the auditorium in numerical order. Unfortunately, the 50-odd seating space didn’t offer me much alternative but to sit by the musicians. Initially I had some concerns about whether or not I’d be able to hear the unamplified voices over the instruments. Luckily, pianist Richard Baker conducts violinist Katt Rob and drummer Richard Burden gently throughout the whole performance. The score has some catchy refrains but, ultimately left little impression on me, except for a couple of songs. I could say the same about the choreography, which looked less professional than other aspects of the show and was rather distracting.

The 15-strong company display good singing skills, although the consistency of the minor characters is undermined by the necessity for cast members to cover multiple roles without any costume changes. I was surprised to see such a large team on such a tiny scene, but it all started making sense by the time the music started and they were all singing in chorus.

This abundance of performers, however, is in stark contrast to the amount of props. The furniture is sober but sufficient, but the missing objects require a lot from the audience’s imagination, especially in such an intimate venue. Even on a side seat, I was too close to the poker table to believe that Wilson was dealing the cards, and an attempted stabbing failed to be scary, since the knife never appeared. Thankfully, the Union Theatre brings plenty of character to the play, with its brick walls and its unfinished look. And it’s a good match for this show, which might also be slightly rough-and-ready, but still provides a good night out for fans of American drama.