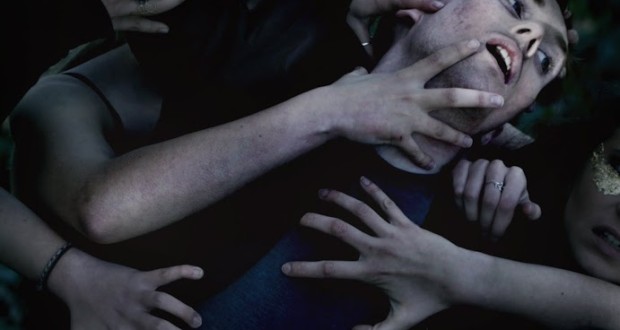 Pros: A few steps ahead of most amateur shows, this is an arresting and intense production.

Pros: A few steps ahead of most amateur shows, this is an arresting and intense production. Cons: A challenging, disturbing play: an alien experience for modern audiences. A play written more than 2000 years ago is bound to be difficult for modern audiences to digest. I found Bacchae, written by the Greek playwright Euripides in around 405BC, a challenging play to watch. Intense and violent, there is little common ground between Bacchae's themes and modern sensibilities. The story tells of the vengeful, jealous god Dionysus wreaking havoc on the lives of mortals who are unable to escape his cruel&hellip;

Striking, intense and unsettling: an impressive production of a strange and violent play.

A play written more than 2000 years ago is bound to be difficult for modern audiences to digest. I found Bacchae, written by the Greek playwright Euripides in around 405BC, a challenging play to watch. Intense and violent, there is little common ground between Bacchae‘s themes and modern sensibilities. The story tells of the vengeful, jealous god Dionysus wreaking havoc on the lives of mortals who are unable to escape his cruel plans. Watching Bacchae is an unsettling, alien and sometimes unpleasant experience.

Despite the unfamiliar subject matter, this is a very impressive production. The modern English translation makes the action as clear as it can be. The setting of the play is not modernised, which I think is wise as a translation of this story to a familiar world would be incongruous and might dampen some of its powerful impact. Instead this production glories in the strangeness of its world. In fact, much of the strength of the show comes from emphasising this strangeness. We are shown a dark, intense and barbaric world of madness, sensuality and death. It is a visually striking production; the twisting bodies of the actors swarm across a darkly lit stage, flowing around scenery constructed from shifting materials and solid, ugly tyres. The atmosphere is intense and aggressive. Instead of trying to grasp the plays’ concepts or empathise with the characters’ motivations and actions, we can simply sit and observe the spectacle of this harsh, unknown world. This production allows its audience to appreciate Bacchae without necessarily fully understanding it.

The Bacchae of the title are a group of women who have been driven mad by the god Dionysus as revenge for not believing in him (because Greek gods are that petty). The women have now left their homes to live on a mountainside and worship Dionysus in frenzied rituals. Their sensual and violent dance scenes create some of the show’s most arresting moments. I found the overtly sexualised, hysterical portrayal of the women unpleasant, but again I agree with the decision to emphasise this rather than trying to hide or soften it. It is integral to the story. A play that hinges around a group of feral women driven to madness, promiscuity and murder is never going to make complete sense in the modern world. But rather than capitulating and ending up with a weak compromise, this production accepts and highlights the play’s themes and concepts. It may make us uneasy, but it also makes for a very striking show.

For an amateur student production of a difficult play, the acting is mainly strong. Some of the actors have a tendency to shout a bit too much, but this is an understandable flaw considering the violent and aggressive nature of the play. Most of the real action takes place off stage and is related to the audience through long speeches (a good thing considering how disturbing and bloody some of the story’s events are) – so there are some challenging speeches for the main actors. Nevertheless, they do a good job, and the ending of the play is more moving than I expected. For the majority of the production, the characters are so alien that it is difficult to identify with them, but by the end they become more human and recognisable. There is tenderness, sorrow and love: emotions we can finally empathise with.

Despite this, there was never a moment when I could fully relax into the play, no points at which it became familiar and comfortable. All in all, this is a show well worth seeing, but one that is more arresting than it is enjoyable.