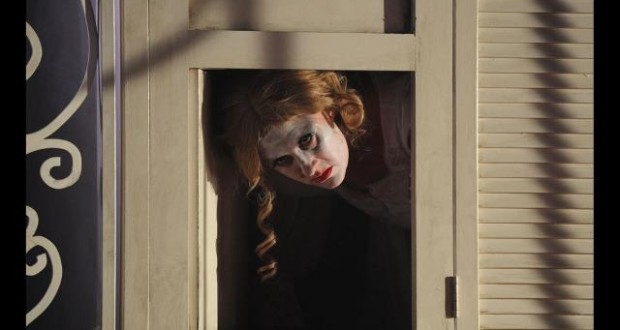 Cons: With no tiered seating some audience members are bound to miss out on a facial expression here or a prop over there in this studio venue. I want to catch every glance and spy every glare!
Bette & Joan: The Final Curtain, St James Studio – Review

Pros: Two great actresses portray two unforgettable screen stars. Cons: With no tiered seating some audience members are bound to miss out on a facial expression here or a prop over there in this studio venue. I want to catch every glance and spy every glare! Before curtain up on Bette &amp; Joan: The Final Curtain we had time to digest the set, some of us sitting and some of us drinking, in the jazz bar style Studio at the St James Theatre. Not a million miles away from a Ronnie Scott’s or underground comedy club, the Studio, with&hellip;

Smart theatre-making and fearless acting. This is a fascinating portrayal of the real and the imagined in the intertwined lives of Bette Davis and Joan Crawford.

User Rating: Be the first one !
Before curtain up on Bette & Joan: The Final Curtain we had time to digest the set, some of us sitting and some of us drinking, in the jazz bar style Studio at the St James Theatre. Not a million miles away from a Ronnie Scott’s or underground comedy club, the Studio, with inclusive bar and balcony level, is smart and modern. Seating was unassigned so I played musical chairs for a while on arrival, admiring the set from alternative vantage points, but finally settling towards the front. Had I occupied a different chair my overall experience might have been less successful than it was.

The open set provoked my curiosity. A cross between an invalid’s bedroom and a star’s dressing-room, the scene is peppered with memorabilia from Bette and Joan’s Hollywood lives. Bette is taken to the stage in a wheelchair before the start: a twisted nod to What Ever Happened to Baby Jane?, which no doubt stirred the concerns of those who fear the crumbling of the invisible fourth wall.

Both biographical and fantastical, the play, part of St James’ Icons Season, explores the famous feud between Bette and Joan through the women’s own eyes and memories. Bette is living her last moments alone, draped woefully across a chaise longue with only the radio for company (Turn Back Time by Cher on repeat – now that’s a dramatic trigger I can sing along to). Death, with its sense of humour, has sent no other than Joan Crawford to fetch her. But Bette won’t budge, so on the instruction of gossip columnists Louella Parsons and Hedda Hooper Joan encourages her nemesis to look back on her life. Because only when her life flashes before her eyes can she arrive at death.

Louella Parsons and Hedda Hooper appear only in projected video form, their faces pushed up close to the lens, with mouths big: a disturbing reminder of the uncomfortable, greedy voyeurism of the movie business. Their sharp and vicious recorded voices interrupt the softer, more vulnerable live voices of Bette and Joan in a way that really scratches and creeps. Much like the contemporary press, every time they reappear you want them to go away so you can catch a glimpse of the real once again. Light and sound are used well throughout the play to add a touch of the cinematic and to carry the audience back and forth through time.

The structure and mechanisms of this drama are smart, as they allow the theatre-makers to represent not only those known and documented moments of these women’s lives, but also to invent creative, funny and sad dialogue between our dead Joan and almost-dead Bette. Both Sarah Toogood as Joan and Sarah Thom as Bette inhabit their characters completely. Had I asked a question to either one in character they wouldn’t have needed time to rehearse; Bette Davis or Joan Crawford would have answered.

Where does the fiction begin and the reality end? Part of the draw of Bette and Joan, and the draw of this excellent show, is that we will never really know.