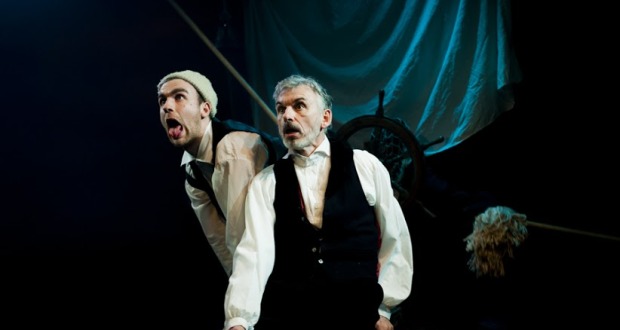 Cons: Very few, but the use of smoke felt excessive, and the ending was slightly underwhelming.
Shipwrecked! An Entertainment, Jack Studio Theatre – Review

Pros: A versatile cast performs this fantastical story with a twist, using great vintage style dramatic methods. Cons: Very few, but the use of smoke felt excessive, and the ending was slightly underwhelming. Based on the true story of Henri Louis Grien, otherwise known as Louis de Rougemont, this is a tale of Victorian high adventure and a lying man’s downfall. It is the Jack Studio Theatre's Christmas production, and one delightfully unlike other seasonal offerings. The character Louis de Rougemont (Tony Taylor) opens the show by speaking directly to the audience to introduce his “entertainment”, on a simple&hellip;

The Jack Studio does it again with another excellent, unique production that effectively incorporates a range of theatrical styles.

Based on the true story of Henri Louis Grien, otherwise known as Louis de Rougemont, this is a tale of Victorian high adventure and a lying man’s downfall. It is the Jack Studio Theatre’s Christmas production, and one delightfully unlike other seasonal offerings.

The character Louis de Rougemont (Tony Taylor) opens the show by speaking directly to the audience to introduce his “entertainment”, on a simple set of wooden platforms, chests and nautical-style ropes and posts. A biographical tale of an ordinary young man’s adventurous life is thus revealed.

As a sickly child Louis yearned to experience life outside his bedroom walls, and at the tender age of 16 he decided that it was time to find his way in the world. After arriving in London, he meets a sea captain who invites him to work on an upcoming pearling expedition in the Coral Sea. A storm leads to shipwreck and a new life in Aboriginal Australia until he decides to venture home to London thirty years later. On his return to an unrecognisable city of smoke and industry Louis’ story has turns him into a celebrity, and the audience are surprised by a revelation that something was not what it seemed…

This production incorporates several styles of vintage performance. Most effective and notably charming were the array of analog sound effects, created as radio foley artists used to do: coconut shells are horses hooves, a pot of ladled water is dripping sea water and various drum beats represent rain and thunder. There are many others, all of which were used in plain view of the audience, reminding us that we were in a theatre watching a play, and highlighting the fiction of the story.

The story is told as if Louis were a narrator in present day society, with his tale’s chapters performed by two actors (Rochelle Rose and Robert Durbin) who play all the other characters that Louis encounters on his journey. Like old-fashioned music hall or variety performance, it reminded me of theatre’s rich history and how these antiquated performance techniques can still create entrancing theatre.

Written by American playwright Donald Margulies, this is the UK premiere of this wonderful play. With a solid concept by Artistic Director Kate Bannister this is a delightful holiday theatre offering. Tony Taylor convincingly portrays Louis at all ages. Rose and Durbin skilfully employ physical performance to show us characters such as the captain, Louis’ mother, his Aborigine wife and Bruno the dog (the audience’s clear favourite). Performances are excellent throughout.

Props are minimal but economically used to represent several things, like the mops that become giant octopus tentacles! The set is rearranged to indicate various locations and objects; and so we see a ladder transformed into the prow of a ship. Costume changes are swift over a uniform of black trousers, white shirts and waistcoats. At 90 minutes with no interval, this is an excellent length: long enough to be substantial, but not so long that it drags.

The only flaws in the production are minor. The excessive use of a smoke machine may have been intended to add mystery, but it rarely matched the action or setting. Additionally, the ending (which we don’t want to ruin for you!) made use of a very realistic prop – so realistic in fact that it seemed slightly absurd given that other parts of the production were represented through movement or through flowing pieces of fabric.

The ending critiqued the press and society’s treatment of celebrities, but glorified creativity and imagination at the same time. This left me pondering how to view the principal character, and reminded me that life is not always black and white by any stretch.