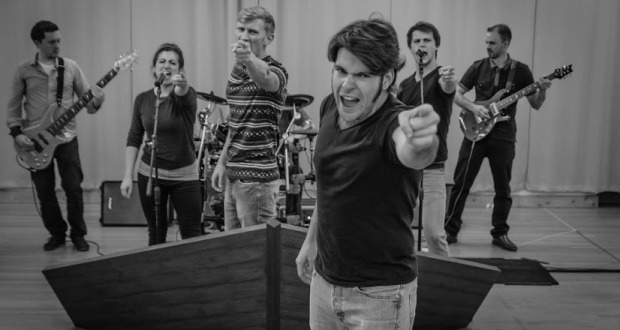 Pros: Strong performances, great music, and excellent design. Cons: A little heavy on the fog effects. For a story with such dark themes, Frankenstein: The Metal Opera looks like a lot of fun for its performers. The production takes the source material seriously and this isn't a lighthearted look at Mary Shelley's classic work. Still, one of the great joys of the performance is watching composer and lyricist Richard Campbell at the back of the stage pounding out the heartbeat of the show on the drums and evidently having the time of his life. Campbell has written intriguing music full&hellip;

For a story with such dark themes, Frankenstein: The Metal Opera looks like a lot of fun for its performers. The production takes the source material seriously and this isn’t a lighthearted look at Mary Shelley’s classic work. Still, one of the great joys of the performance is watching composer and lyricist Richard Campbell at the back of the stage pounding out the heartbeat of the show on the drums and evidently having the time of his life.

Campbell has written intriguing music full of depth, with tunes that range from toe-tappingly catchy to powerfully operatic. One of my favourites was the simple instrumental ‘The Veil’, representing both the marriage between Victor Frankenstein and his beloved Elizabeth, and the hidden secret which keeps them apart emotionally. (Tip: if you start bringing people back from the dead, it’s common courtesy to warn your loved ones. Victor, sadly, learns this too late.) This song provides a beautiful counterpoint to the more powerful numbers like ‘Modern Prometheus’ and ‘Retribution’. I can’t say I was quite as keen on the lyrics as the score. On the plus side many passages within the lyrics are taken directly from the novel itself, which helps keep the production grounded in the spirit of Mary Shelley’s work.

The show is told as a retrospective, with the timeline shifting periodically from the frame story of Dr Frankenstein reminiscing about his story into the moments when the action occurred. These transitions are managed within scenes with effective staging keeping the boundaries between the two different narratives very crisp. James Craze leads the charge as Walton, the sea captain who finds Frankenstein (Roy Ryan) wandering across the arctic, chasing down his creation. Ryan brings power and energy to his performance of the morally corrupt doctor as he confesses his history to Walton and his crew.

Frankenstein’s downfall starts with the death of his mother, which encourages him to pursue scientific experiments into the restoration of life to inanimate tissue. When he at last achieves his goal of reanimating a dead human, Frankenstein suddenly realizes his hubris and error, fleeing from his creation and returning to his family home. Victor’s childhood sweetheart Elizabeth (Anya Hamilton) provides a tempering influence, allowing Frankenstein to express the better parts of himself and the noble intentions that he once had. Frankenstein reveals to Elizabeth that he’s done something bad but is still unable to redeem himself. He never explains to anyone exactly what he’s done, even going so far as to allow an innocent person to be put to death for crimes he knows were committed by his creation.

Though present early on, the Creature (Duncan Drury) remains mute until relatively late in the show. His eye-popping stage makeup more than makes up for his silence at first. Drury invests the Creature with a dignity and earnestness that makes him sympathetic despite his violent crimes, committed as an act of vengeance against his creator’s lack of empathy. Charlotte de Paeztron and Max Panks round out the cast’s vocal presence as minor characters.

A major strength of this show is the design, which makes the most of The Space‘s auditorium with a nifty modular set tinged by Gothic elements. Lighting is used to great effect to shift the atmospheric sense throughout the show. The design, music and performing all come together to make Frankenstein a fully envisioned little universe of sci-fi spectacle. It is epic, operatic, carefully considered, and yet not without humour: after the well-deserved applause the audience exits to the classic novelty song “Monster Mash”. This light touch at the finish gave just the right tone, recognizing Frankenstein’s presence in pop culture as well as Shelley’s original intentions for her creation.

Previous: We Can See It From Here and Learning How To Die Ovalhouse Theatre – Review
Next: Dad Dancing, Battersea Arts Centre – Review