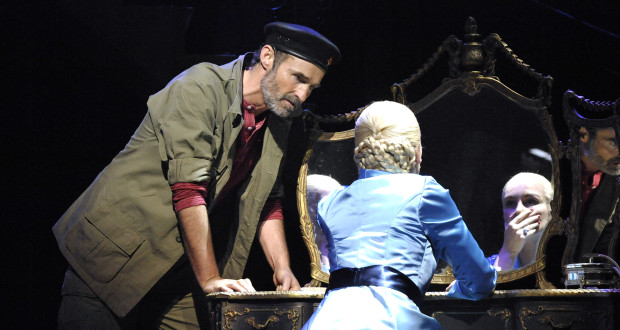 Bill Kenright's production of Evita will play in the Dominion Theatre from 16 September!

Don’t cry for me, Argentina… Guess what we’re giving away tickets to this week?! Enter now.

We’re delighted to bring you the opportunity to win a pair of tickets to the West End production of Evita, the world-famous and award-winning musical by Tim Rice and Andrew Lloyd Webber. The tickets are valid for any Monday – Thursday until 16 October 2014, subject to availability. Naturally, you can’t transfer or exchange the tickets, and we won’t be offering a cash alternative!

As always with our competitions, there are no catches – you simply complete the entry form below by 6.00pm on 15 August 2014 and you’ll be entered into our prize draw. If you’re the lucky winner you’ll hear from us a few days later. It really is that simple!

Sadly, this competition has now closed!

With more than 20 major awards to its credit, and an Oscar winning film version starring Madonna and Antonio Banderas, Tim Rice and Andrew Lloyd Webber’s Evita is iconic. Featuring some of the best loved songs in musical theatre, including Don’t Cry For Me Argentina, On This Night of a Thousand Stars, You Must Love Me, and Another Suitcase in Another Hall, Evita charts the story of Eva Peron, wife of former Argentine dictator Juan Peron, from her humble beginnings through to the extraordinary wealth, power and status which ultimately led her to be heralded as the ‘spiritual leader of the nation’.

Marti Pello plays Che, a character who reflects the voice of the Argentine people as they observe Eva’s meteoric rise to fame. For over 30 years he has enjoyed global success as a solo artist, the lead singer of Wet Wet Wet, and now as one musical theatre’s most popular leading men. With Wet Wet Wet, Marti enjoyed virtually unrivalled chart success, including over 25 hits and three of the UK’s biggest number one singles. His West End and Musical Theatre credits include The Witches of Eastwick, Chess, Chicago and Blood Brothers.

Madalena Alberto’s musical theatre credits include Fantine in the 25th Anniversary production of Les Misérables. The Portuguese singer-songwriter is releasing her first album, Don’t Cry For Me, to coincide with this production.