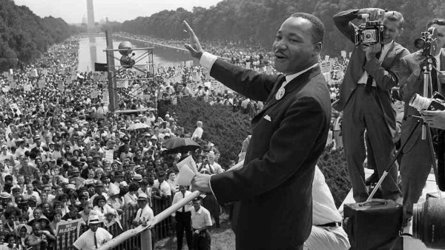 Pros: A thoughtful and stalwart performance from Victor Power, with energetic and refreshing support from Felicity Dean.

Pros: A thoughtful and stalwart performance from Victor Power, with energetic and refreshing support from Felicity Dean. Cons: Shallow characters make it unconvincing as a whole. As part of the 2014 HopeFull Festival, Islington’s Hope Theatre presents Paul Minx's The Long Road South, directed by Jake Murray. Set in the politically charged 1960’s US Midwest, the play follows Andre's last day of employment as African-American hired help for a family of three in Indiana. Andre has been working for Jake, Carol-Ann, and their daughter Ivy for over six years. However, since joining him in the summer his girlfriend Grace&hellip;

Set in the politically charged 1960’s US Midwest, the play follows Andre’s last day of employment as African-American hired help for a family of three in Indiana. Andre has been working for Jake, Carol-Ann, and their daughter Ivy for over six years. However, since joining him in the summer his girlfriend Grace has convinced him to return with her to Alabama, where his previous arrest following his wife’s death has left his daughter Jule in an orphan home wedged amidst the unrest of the burgeoning civil rights movement. Andre’s attempts to request his final pay before setting off lead to rising tensions and the play goes on to further explore racial and familial conflict, strangely hovering somewhere between drama and farce and ultimately failing to deliver a strong statement in the process.

American playwright Paul Minx’s script struggles to attain a solid identity. There is altogether too much unprompted exposition, making the play choppy and hard to invest in. The dialogue is ripe with bitter humour and racial stereotyping on both sides making it difficult to take the action seriously, especially with a cast of characters possessing little depth. The role of Ivy, played by Vanessa Mayfield, is particularly obnoxious, and not in the well-developed, love-to-hate sense. A spoiled and harsh teenager, she has little purpose in the script other than to nag and unsuccessfully seduce Andre. Ivy dominates the stage and distracts from more interesting matters at hand, including her institutionalized brother’s vague illness and Andre’s run-in with police brutality, which might have been a more poignant focus considering its relevance to modern day US cultural politics.

I suspect that as an American from the Midwest I’m harsher on the production than some, but beyond finding the script to be a shell in comparison to other racially-charged plays inspired by the same time period, I found the wandering and inconsistent accents utilised by the cast of this particular production distracting. While Jake, Carol-Ann, and Ivy represent a family unit, each has a markedly different take on how people speak in Indiana – ranging from Carol-Ann’s caricature-like, deep Southern Belle drawl to Ivy’s attempt at a more nasally northern accent. As Jake, Michael Brandon was most consistent in this respect.

Stereotypical accents aside, Felicity Dean stood out as the most interesting performer to watch as the depressed housewife with an alcohol problem, Carol-Ann. Victor Power commanded the stage as best he could, working with the shallow sketch of Andre as a polite yet downtrodden man who just deserves some respect – a role that would have benefited from more subtle nuances in the script.

The space and design posed some confusion as well. The Hope Theatre is housed in a rather cramped and stuffy black box –the tight seating brought me uncomfortably close to my fellow audience members.  The stage was arranged in a runway style, with the action taking place in the center while sections of the audience were seated on either side. This is a bold move for any production, as seeing the expressions on fellow audience goers’ faces can be distracting and certainly didn’t do any favours for The Long Road South.

I can’t say this was one of my favourite plays but if you’re a connoisseur of 1960’s American family dramas, by all means tick it off your bucket list.