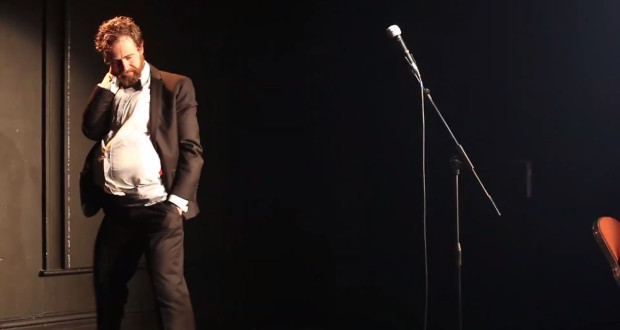 Pros: Takes the well-known Orpheus myth and brings it into the present day within a clever framework.

Cons: I know Orpheus went to the Underworld but the heat in the theatre was too much . . .
Fat Man, Ovalhouse – Review

Pros: Takes the well-known Orpheus myth and brings it into the present day within a clever framework. Cons: I know Orpheus went to the Underworld but the heat in the theatre was too much . . . Orpheus is a fat man who tells jokes, or specifically, one routine about how he lost the love of his life, Eurydice. That, quite simply, is the premise of Fat Man, an entertaining and at times exceptional one-man show playing at the Ovalhouse this week. The idea behind Martin Bonger’s show is as simple as it is bizarre. Orpheus, having lost Eurydice&hellip;

A touching version of Orhpeus and Eurydice that is at times exceptional. The show adds something to the original story by bringing it up to date, which was quite unexpected.

Orpheus is a fat man who tells jokes, or specifically, one routine about how he lost the love of his life, Eurydice. That, quite simply, is the premise of Fat Man, an entertaining and at times exceptional one-man show playing at the Ovalhouse this week.

The idea behind Martin Bonger’s show is as simple as it is bizarre. Orpheus, having lost Eurydice to the fires of the Underworld, now tells his story as a stand-up routine to the assembled gods of Olympus in the audience (the audience sits with the gods rather than up in them – terrible joke, I’m sorry). He has abandoned the music that made him so exceptional and is trying his hand instead at comedy.

But of course it’s not funny at all because Orpheus is, and forever will be, distraught. When he is not visibly breaking down in front of our eyes or refilling a drink from a never ending trick receptacle there are a few hollow one liners – ‘Zeus, if you’re going to throw lightning bolts at least throw them at the technician, he knows what to do with them.’ Ba-Doom . . . As Orpheus works through his painful gags, we see a man failing to cope with the loss of the thing he held so dear.

What is perhaps most likeable about the whole idea is that it keeps its tongue firmly in cheek, and with something as obviously contrived as this, it really needs to. Orpheus follows Eurydice onto the 67 bus on Oxford Street and tells her what great a musician he is. So good in fact that he can charge £30 into a gig (‘when I sing, the psycho who eats his children just stops – ahem Cronos). But what makes this more than just a witty retelling is the surprising addition of humanity that is not in the story you know. It is extremely moving to hear Eurydice’s voice as she and Orpheus attempt to leave the Underworld, and Bonger plays this moment extremely well. Oh, and if you’re wondering why Orpheus is such a fatty, the doughnut analogy, when it hits, is superb.

Bonger is desperately dishevelled and believable in a fat suit, so much so that it catches you off guard to see him from time to time nimbly dance around the stage to Phillippe Nash’s subtle and gorgeous score. He is convincing as the emotional wretch but still retains the comic’s glint in his eye. This being technically a comedy routine, there is some great physical comedy that feels somewhat necessary with the weight of the rest of the piece. Alex Swift’s direction is also very strong. There are some lovely tonal shifts where Orpheus drops all attempts at cheerfulness and the misery inside him comes through.

You feel that Bonger has chosen the medium of the stand-up comic to tread that thin line between comedy and tragedy. At times it would be nice to see more of Orpheus as the hilarious comedian to then more clearly see into the misery of Orpheus the grieving lover. It’s never explained why Orpheus turned to stand up after losing Eurydice and this is a bit of a gap. Most comics at some point have a genuine desire to make people laugh, Orpheus does not.

But that doesn’t stop this being a thoughtful and well performed show. As Orpheus himself says, ‘This is a myth, right. Work with me.’

Paul’s interest in theatre stems exclusively from an ambition that one day in the future he will open the 40,000 seater Paul Testar Theatre, the world’s first completely aerial theatre, in the skies above West London. While not completely focused on fulfilling this entirely realistic aim he loves watching pieces of theatre that defeat expectation and can turn the banal into the extraordinary. He works in TV, has a degree in English Literature (it's a blessing and a curse) and also writes, directs and produces for the theatre.