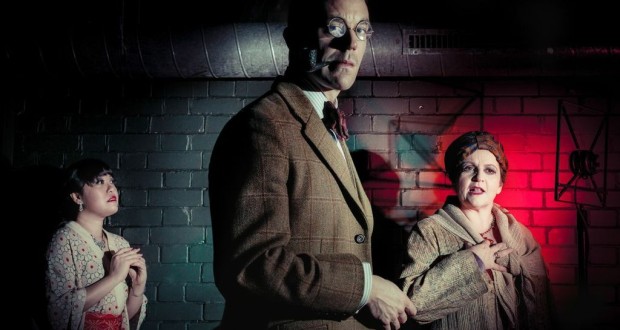 Pros: Period costumes and larger-than-life characters produce an immersive 1930s feel. Cons: The heavily improvised show lacked structure, variety and substance. In a rather smelly tunnel underneath Waterloo station, past the grumpy security guard trying to eat his dinner in peace, with a secret code for a metal gate in hand, I found my way to the flashing lights that marked the entrance to Mr Quinn's Radio Theatre. The industrial grime disappeared as soon as I entered the Network Theatre, which became a radio studio of the 1930s. The atmosphere is immersive: we, the audience, are at a rehearsal&hellip;

The hidden location is fun to find, but unfortunately the performance had a shambolic quality that wasn’t entirely intentional.

In a rather smelly tunnel underneath Waterloo station, past the grumpy security guard trying to eat his dinner in peace, with a secret code for a metal gate in hand, I found my way to the flashing lights that marked the entrance to Mr Quinn’s Radio Theatre. The industrial grime disappeared as soon as I entered the Network Theatre, which became a radio studio of the 1930s.

The atmosphere is immersive: we, the audience, are at a rehearsal in Act One and then a recording in Act Two for a radio adaptation of Alice’s Adventures in Wonderland, directed by the smartly dressed Mr Quinn (Mark Phillimore). He battles with the egos of his actors – like the drunkard Mr Carter-Hayes (John Exell) and the luvvy Mrs Rose, played by Geraldine Brennan, who embodies her onstage darling with over-enunciation and pithy put downs, rambling on about the Stanislavski method and trying to decide which animal she should channel in playing Alice.

The set-up felt authentic, helped by period costumes. Mr Quinn, dressed in a three-piece tweed suit, stretched his vowels to create a precise imitation of old-fashioned radio presenters. He talked to the audience while the cast came on one by one. As they entered the stage, they began throwing barbed remarks at each other. Naturally, Quinn’s rehearsal did not go according to plan. After the interval, the audience witnessed the actual recording – the performers gathered around the vintage microphone and read from their scripts. This second half was coloured by the chaos and disagreements of the first act rehearsal, so it was funny to see the characters now acting professionally.

Unfortunately, in the improvised first half, the dialogue fluctuated between long pauses and moments when too many people were speaking at once. Sometimes this made it difficult to hear, and it seemed like the improvised moments had no structure – they were a free-for-all that led to lots of clashes or clipped lines. Extended periods of silence were frequent, and panicked expressions from one cast member to another suggested that these were not intentional moments of tension, but accidental instead. However, in the midst of the (largely intentional) onstage chaos were some funny insults, as each of the egotistical actors tried to exert themselves over the others.

With the many ‘um’s and ‘er’s of natural speech, it seemed difficult to maintain the energy needed to keep the audience engaged. The actors were clearly enjoying themselves, having fun with the creative challenge of making up their lines, but the performance would have benefitted greatly from a bit more structure and variety in the way that the cast improvised – they were only really throwing pithy insults at each other.

Still, Mr Quinn and his team skim the surface of the mythologised figures of drama’s past: drunk, troubled, egotistic. They hint at a breed of performers who were fantastical characters even when they were not performing – think Orson Welles narrating War of the Worlds. That breed is gone now, and probably a good thing. The Archers would be very different with Mr Quinn and co. at the helm.