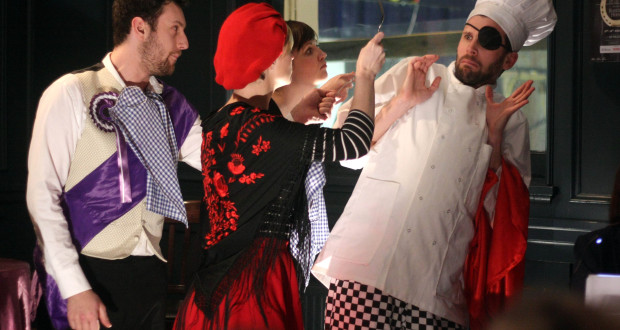 Pros: A light-hearted, lively and fun performance in a cool impromptu venue.

Cons: Difficult to see depending on where you are sitting.
Le Docteur Miracle – Pop-Up Venue: Drink, Shop & Do Café, Review

Pros: A light-hearted, lively and fun performance in a cool impromptu venue. Cons: Difficult to see depending on where you are sitting. Drink, Shop &amp; Do is a café/bar located just around the corner from King’s Cross station. It is wonderfully quirky; the kind of place where you feel like you are having a drink in a vintage furniture shop (much of the crockery and furniture is in fact for sale). They also host outlandish cocktail nights, such as ‘Build Your Own Lego Robot’ and ‘Doodle Club’ and even a night dedicated to list-writing called ‘I Love Lists’ (this&hellip;

Wonderful for opera lovers and novices alike. This kind of production proves that opera can be fun for anyone, and that it needn’t take itself too seriously.

User Rating: Be the first one !
Drink, Shop & Do is a café/bar located just around the corner from King’s Cross station. It is wonderfully quirky; the kind of place where you feel like you are having a drink in a vintage furniture shop (much of the crockery and furniture is in fact for sale). They also host outlandish cocktail nights, such as ‘Build Your Own Lego Robot’ and ‘Doodle Club’ and even a night dedicated to list-writing called ‘I Love Lists’ (this appealled to me greatly, as I do in fact love writing lists, but didn’t know there were others who shared my itemisation fixation…). Naturally, this was the perfect place for Popup Opera to put on a performance of their latest production, Bizet’s Le Docteur Miracle.

The plot of this opera is light-hearted and fun, fitting in well with the venue’s atmosphere. It deals with a young Italian soldier-and-opera-singer who falls in love with the daughter of an opera- soldier- and Italian-hating mayor. The young man comes up with a ridiculous plan to get the girl, involving dressing up as a cook and getting hired in the mayor’s household, creating a dreadful omelette and claiming it is poisoned, then masquerading as the eponymous miracle doctor and exchanging the antidote for the daughter’s hand in marriage. The score was written by Bizet when he was only 18 years old, as part of a competition organised by Offenbach, which he subsequently won. The result is a wonderful concoction of laughs, singing and music, which proves that opera doesn’t always have to take itself so seriously.

Popup Opera have really taken this piece and made it their own, and not only through their impromptu performance space. I must admit that I am not a regular opera-goer myself, so I can’t comment on the quality of the singing, though to my ears it sounded great, but what I can say is that I had a great evening. The opera is sung in French, but a handy programme gives a useful scene-by-scene synopsis. There is also a backwall projector showing surtitles, which irreverently give the gist of what is going on, often using modern-day cultural references. For example, a scene in which the daughter is accused of receiving messages from her lovers is summarised as “I hope you aren’t sexting, young lady”. These surtitles, provided by technical assistant (and wonderful compère) Harry Percival really give the production its identity, and as well as being useful to understand what is going on, provide many good laughs themselves. The company also use various instruments and audience interaction segments to get everyone joining in the fun. At one stage, they had half the audience using tambourines and maracas and singing along. No wonder this company has such a good reputation.

Aside from the great performances from the singers (Aurelia Jonvaux, Robert Lomax and Sarah Champion and Benjamin Seifert), I must also mention the pianist Elizabeth Challenger, who performed live and provided a wonderful musical backing to the action on stage.

All in all, it was a fun and lively performance. If I were to be pernickety, I’d say that it might have been quite difficult to see the stage from the back of the audience, but this is a minor quibble and to be expected from unusual performance spaces. So if you fancy some light-hearted operatic fun, or want an easy introduction to opera, don’t miss this production, which will be touring London and England until May.