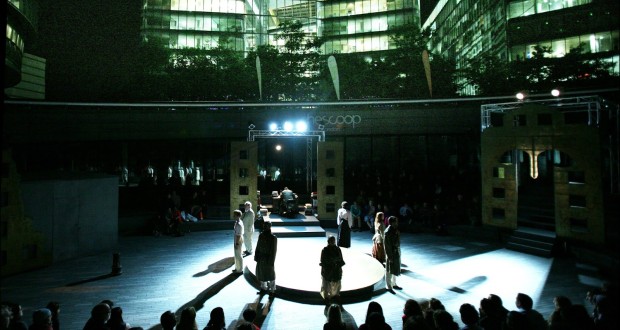 The Thebans Season, The Scoop

Cons: Parts of the performance didn’t work for me, but maybe that’s because I’m not a kid anymore!
The Thebans Season, The Scoop

Pros: Great family fun in a fantastic outdoor setting. Cons: Parts of the performance didn’t work for me, but maybe that’s because I’m not a kid anymore! Celebrating 11 years of free theatre, The Scoop is home to the MoreLondon Free Festival and in all honesty a credit to London. The evening in Thebes began with a family show, and it was a delight to see children and families filling the seats. It reminded me, yet again, of the importance of funding the arts. Children should have access to creative learning platforms, and productions such as these are unfortunately&hellip;

A lovely and generally well-executed idea – certainly worth taking the family along for an evening at The Scoop.

Celebrating 11 years of free theatre, The Scoop is home to the MoreLondon Free Festival and in all honesty a credit to London. The evening in Thebes began with a family show, and it was a delight to see children and families filling the seats. It reminded me, yet again, of the importance of funding the arts. Children should have access to creative learning platforms, and productions such as these are unfortunately less of a priority than they should be.

Prince of Thebes, written by director Phil Willmot, introduces the audience to the Greek mythology and was overall a well put together show with a couple of impressive bits of puppetry. The cast were delightful and Joseph Wicks gained many laughs in his performance as Archie the Bear. I was, however, underwhelmed by the music, which was taken from various popular songs. It was all a bit haphazard, and the cynic in me especially cringed at the finale, Don’t Stop Believing. However, some brave children did get up on stage to join in the dancing, which reminded me how wonderful it all was for them. Of course for this particular production I looked to the children for judgement and saw that most were thoroughly engaged with what was happening on stage, which is perhaps the best compliment the company can ask for.

There’s an hour’s break before the double bill of Oedipus and Antigone starts, and I must say I enjoyed the continuation of the stories, starting with a young Oedipus up until his daughter Antigone’s story. Each piece fits into an hour, and as a result there’s quite a straightforward approach to the plays. There were a few bits of ensemble movement that worked well and a couple that didn’t really do much for me, but nonetheless the story of Oedipus is always powerfully dramatic. The minimal set reminds us that great storytelling is more than tech and scenery, and that the story is the heart and soul of any play. That being said, I was also impressed by the sound in this show, designed by Theo Holloway.

Oedipus is a wordy play but the cast delivered their lines with conviction. Philip Scott-Wallace shows versatility in playing a young Oedipus for the family show and a convincing adult Oedipus an hour later. There was one dodgy moment when Oedipus and his mother/wife have a romantic dance serenaded by a wedding singer and mimicked by the ensemble cast. The reason for the singing in this scene was a little lost on me, but that may just be down to personal taste.

It’s been a while since I’ve been to an outdoor venue, and at Everything Theatre we’re great advocates for open air theatre, having recently written a guest blog about venues in London. There were brilliant moments when nature highlighted the drama, with gusts of wind sweeping across the stage at just the right moment. That’s the sort of thing that makes me smile during a performance, lifting it onto another level of enjoyment. The performance of Oedipus is also well-timed, starting just as daylight hours are ending so that night really does fall on our hero. It was a shame that the lights in the building behind were constantly flickering on and off but this wasn’t the fault of the production of course!

It might not be a performance that will stay with you, but the combination of decent acting and a great space make this an enjoyable evening. Admittedly what attracted me most to this show was the fact that I’d never been to anything at The Scoop before, and even if that’s your reason too it’s a good one. One thing I would say: if by the end you feel you’ve had an enjoyable evening, do think about giving a small donation so that they can continue the fun!