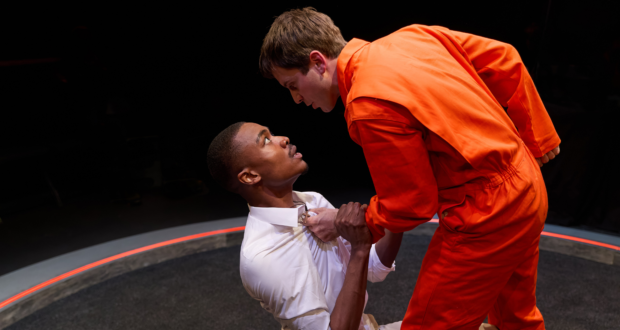 ‘Inferno’, the first part of Dante’s ‘Divine Comedy’, describes his journey through nine circles of hell. 9 Circles charts the journey of Private Daniel E Reeves (Joshua Collins) through his own nine circles of hell. We begin as Reeves is honourably discharged from the US Army - against his wishes: this is his first circle of hell. His discharge is brought on because he sought help from an Army psychologist (Samara Neely-Cohen) who diagnosed him with a personality disorder. A short time later, he wakes up in a jail cell. Assuming he’s had too much to drink the night&hellip;

An unsettling, sometimes surreal account of a discharged soldier’s downfall and mental instability, which is sadly too relevant to current news

We begin as Reeves is honourably discharged from the US Army – against his wishes: this is his first circle of hell. His discharge is brought on because he sought help from an Army psychologist (Samara Neely-Cohen) who diagnosed him with a personality disorder. A short time later, he wakes up in a jail cell. Assuming he’s had too much to drink the night before, Reeves worries about damage to his car: this is his second circle of hell. We follow him down through hell as he discovers he has now been accused of the rape and murder of a fourteen-year-old girl in Iraq. Through each circle, we learn more about him and his alleged crimes

9 Circles is staged in the round in a simple set from Duncan Henderson; a circle on the floor and a circle hanging above, with lighting designed by Tom Turner. They dim, brighten, flash and move as the circles of hell deepen. Other characters can step in and out of these rings, but they keep Reeves caged. From the opening, he is on stage within the circle. He remains there until the end, even receiving his costume changes from other characters, and changing within the enclosed space from army fatigues to civvies to prison jumpsuit. It is Collins as Reeves who holds all of this together, bringing intensity, and doggedness to the role. It’s not a comfortable play to watch. In the small space of Park 90, Collins turns to speak to each section of the audience and often pauses to make eye contact, appearing to speak as if it were directly to individual audience members and adding to the intensity.

Some scenes and conversations seem surreal. Early in the play, in the first of multiple roles, David Calvitto plays a senior army lawyer. He comes to speak with Reeves as he wants to use his case to make a larger point about the war and the merits, or lack thereof, of George W Bush. He seems to have convinced Reeves, or at least made a connection, but then his character is never heard from again, and later the actor plays a different lawyer. In between, there is an odd section where Reeves is visited by a Pastor (Daniel Bowerbank) who has an addiction to internet pornography.

What is going on? Are we in a version of reality unreliably narrated by Reeves? Are we on a metaphorical journey, or are these meant to be taken at face value? I wonder if familiarity with the details of ‘Dante’s Inferno’ is needed to fully understand and appreciate this play. Or maybe we are simply to be left with questions?

It feels like 9 Circles, while using Reeves to make its point about a young unstable man who was sent to the other side of the world to kill, often appears to forget the victims of this crime. Even accepting the argument that Reeves is a victim of the military-industrial complex, is he more of a victim than a raped, murdered 14-year-old girl? 9 Circles does come back to the victims as the play ends but it feels too late and with just a little too much explaining, if not justifying.

With today’s headlines full of news of ongoing war crimes trials in Ukraine, Bill Cain’s 2010 play based on a real-life incident in Iraq remains, unfortunately, timely and just as relevant.

Originally from Dublin but having moved around a lot, Dave moved to London, for a second time, in 2018. He works for a charity in the Health and Social Care sector. He has a particular interest in plays with an Irish or New Zealand theme/connection - one of these is easier to find in London than the other! Dave made his (somewhat unwilling) stage debut via audience participation on the day before Covid lockdowns began. He believes the two are unrelated but is keen to ensure no further audience participation... just to be on the safe side.