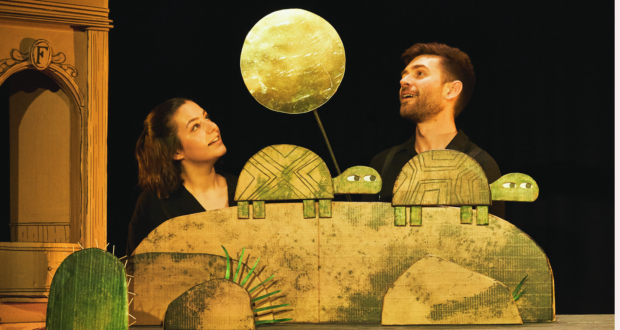 Review: I Want My Hat Back trilogy, Little Angel Theatre

Review: I Want My Hat Back trilogy, Little Angel Theatre

Following its incredible internet success during lockdown, I Want My Hat Back has at last arrived on stage at the Little Angel Theatre in this show for ages 3-6.&nbsp; Adapted from Jon Klassen’s fabulous picture books by Sam Wilde and Ian Nicholson, this time it's not just one story but the whole trilogy: talk about value for money! So how does it compare to the original screen version? Well astonishingly, this production is bigger, better and even funnier! The three stories are all centred around hats. In the first, a bear has lost his hat, stolen by a rabbit.&hellip;

Hysterically funny and stunningly imaginative. Even with its Peaky Blinders moments this amazing show will have you laughing all the way home, discussing its topics and creating things from cardboard long afterwards.

Following its incredible internet success during lockdown, I Want My Hat Back has at last arrived on stage at the Little Angel Theatre in this show for ages 3-6.  Adapted from Jon Klassen’s fabulous picture books by Sam Wilde and Ian Nicholson, this time it’s not just one story but the whole trilogy: talk about value for money! So how does it compare to the original screen version? Well astonishingly, this production is bigger, better and even funnier!

The three stories are all centred around hats. In the first, a bear has lost his hat, stolen by a rabbit. The second introduces us to a tiny fish who admits he has stolen a hat from a big fish and has no intention of returning it. The third follows two turtles who find a single hat, so there is not enough for both of them. It’s incredibly funny, imaginative, and yet quietly challenging: at moments a veritable Peaky Blinders for kids! But don’t worry – all round this is a delightful show that you will want to see again and again, and that will make your face ache from smiling.

The meticulously crafted stage and puppets are brilliant. There is the same mini-theatre set design as seen in the streamed show, and it still looks like it’s made from cardboard! It’s impressively detailed and even has the desk from the original design built in. Everything though is much bigger, allowing the live stage performance to extend the borders of the set, with the characters inventively exploring the area beyond, and even within it.

There’s enormous fun here, based on simple but clever puppetry. When that bear chases the rabbit the audience were in hysterics! Elsewhere, there is some peril to an animal and one child was so surprised and invested in the tale she shouted out “Oh my God!” The puppets interact playfully with the audience, causing giggles and exclamations of joy. They occupy the entire space using different scales (not a fish joke!) and formats to create a really exciting, immersive experience. It all feels very inclusive, as there’s satisfyingly rich, non-verbal communication built in to the puppetry. Also, in keeping with the spirit of the original, the audience are encouraged to craft their own puppets in advance, courtesy of videos available via the Little Angel’s YouTube page, so many of them become puppeteers themselves, whilst others join in with hand movements.

Performers Imogen Khan and Simon Lyshon are an amazing, likeable team, meticulously pacing the story and working together skilfully to maximise the fun and the drama. The whole thing is underscored by an agile musical soundtrack from Jim Whitcher, which cleverly creates tension, excitement and humour. And you – yes you Sherry Coenen, lighting designer, stand up and take a bow for the amazing work you have done, which adds to the delight at every step. That undersea adventure is simply stunning, and the mirror ball! Well, it is wonderful. The whole audience gasped amazed in the reflected light of those mirrored turtles.

Full of questions, anticipation, comedy, thrills and with some surprisingly dark moments, the script actually deals with lots of important questions. We’re gently asked philosophical questions, such as is it right to lie and steal? How should we respond? Topics of sharing and punishment are opened up in a beautifully comedic, enormously entertaining 45 minutes.

I can’t speak highly enough of this production – it’s hilarious, imaginative, beautiful, surprising, encourages reading and creativity and will send the family home with lots to talk about. I really take my hat off to the team.

I Want My Hat Back Trilogy plays at Little ANgel Theatre until 31 July. Further information and bookings can be found here.