You can use WP menu builder to build menus
Home » Features and Interviews » Interview: Making ‘Apologia’s’ at Questors Theatre 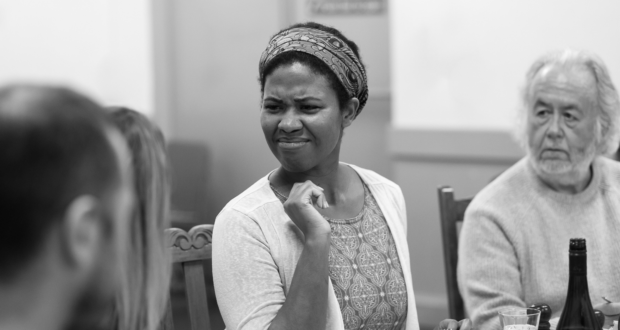 Author: Everything Theatre in Features and Interviews 10 May 2022 0 525 Views

Apologia first hit the stage at the Bush Theatre in 2009, before being revived in 2017 by Jamie Lloyd at Trafalgar Studios. We think those are big shoes to fill if you plan to bring the show back in 2022. But that is just what Ealing’s Questors Theatre are doing. So it seemed a great time to sit down with director Meneka Dass to find out more about the play, why they have decided to tackle it now, and why this theatre in Ealing should have been on ET’s radar much earlier!

What is it that drew you to this play?

I saw the first production of Apologia in 2009 at the Bush Theatre in their studio, with an equally captivated audience in a shared experience; huddled together in the top gallery, we watched the story unfold. A tale of long-festering family resentments came to the surface, just as the sparkling wine loosens inhibitions at a celebratory birthday dinner.

I laughed a lot but it left me with a lump in my throat: there was so much I could relate to. Like Kristin, my mother was not the best cook. A simple meal could take hours because she was more interested in running campaigns and helping change lives, which was not expected of a typical Indian mother in a small Indian village. Growing up, we the children had to burden that shame of having such an unconventional mother, so watching Kristin somehow helped me make peace with my own mum!

One review called the play “a modern comedy of manners with a political, big heart, but also a black streak running through it”. On a more primal level, for me it is about family, failures and forgiveness. It is these universal themes that gives this play its timelessness, and why it will continue to connect with audiences, which is a testament to the writing.

The play tackles the difficulties for a woman having to almost choose between family and career: do you think that this is still as much the case today as it was when it was originally written?

Hmm…this is my subjective opinion, but I still think so. I see it in myself and my friends; these are choices we are facing even today.

I feel especially in our industry we have a lot more pressure. Taking time to balance family and work as an actor/director doesn’t come easy, but thank God people are talking about it and it’s not such a taboo subject. Women have carried the guilt of wanting something more for themselves beyond just having children and this is beautifully represented in a recent film I watched, The Lost Daughter, directed by the extremely talented Maggie Gyllenhaal. More films, books and plays centred around this theme help to open up conversation, which is a good start. But there is no easy answer.

Whilst it appears to be a very female orientated play, it was written by a man and previously directed by a male. Do you think you bring a different female perspective to the play?

Well most of my training has been in acting, so when I do my character breakdowns I tend to play them all, including the men: I work through how they think, their behaviour, their why. It is fun and challenging at the same time. I discovered that when I was Peter and Simon (her sons), I did not like Kristin because I totally felt the suffering they endured from her absence. But when I play Kristin, with her ability and vision to look beyond herself, for me she always wins.

This is definitely a learning curve for me as a director, so I chose to explore and bring both narratives up for consideration and let the audience decide – give them that freedom. Like the play, the approach is not preachy but intends to leave you with something to think/ponder on.

Before he turned to being a full time writer, the play’s author Alexi was an amazing actor. I know because I worked with him on the RSC production of Salman Rushdie’s Midnight’s Children, directed by Tim Supple. I always said to him that if I ever directed for theatre I would really want to direct Apologia, and years later it has come to pass here at the Questors! This is the first play I’ve directed and I have a lot to learn. Alexi has been a huge support through these rehearsals, and I don’t think I would have had a different conversation if it was written by a woman because all the conversations I have had with Alexi come from a place of his personal/emotional truth.

The play’s central character was an activist in the 1960s; was there any consideration of bringing the time period forward or do you think the 60s were a unique time for protest? Have you had to adjust ages to fit better?

The play is actually set in 2008, but yes I do think that the 60s was a crucial time in our history for social change. There was a certain spirit of awareness – of wanting to make a better world. I grew up listening to the folk songs of Woody Guthrie, Joan Baez, Bob Dylan. At their heart they are protest songs, provoking and inspiring their generation to think beyond themselves. Kristin was there: she was one of them. When pushed to make a choice, she didn’t just talk the talk but walked the walk. To quote Kristin: “I mean you may laugh at this, you may find it sweet and hilarious, but an artist was someone whose voice could be the instigator of social change”. This makes me think about my own/our generation, our leaders, and that is what makes the play still so relevant for us today. Are we complacent? Are we ignorant? Are we naive? Those were the questions I found myself asking when I saw the play the first time and still do now.

We’ve never been to Questors Theatre before, can you tell us a little about the venue?

The Questors is London’s largest community theatre, in the heart of Ealing. They have been running for over 90 years, and they have a membership of over 1,000. They stage 18-20 inhouse productions a year, across their two theatre spaces, consisting of a studio theatre and their Judi Dench Playhouse (named after their president). They also host a range of visiting theatre companies, and deliver a variety of one-off and special events.

They run acclaimed training courses; everything from short modular courses to a two-year part-time acting course for people intending to pursue an acting career. Not to mention their thriving youth theatre, attended by 500 children and young people every week!

It’s an amateur theatre: do you think the ‘amateur’ tag can put people off from checking it out?

It certainly hasn’t stopped many Questors shows selling out, that’s for sure! The calibre of talent and hard work that goes into each production is always of an incredibly high standard, from the programming and acting to the costume and set design. Artistic Director Alex Marker is in fact a professional set designer, and designs many of The Questors productions. They are inclusive and affordable, but always produced to a professional standard.

And what have you got planned for the future?

Running alongside Apologia, The Questors present the premiere of Dead Boy Cafe in in the Studio – the winner of their international Student Playwriting competition (this is due to open up for entries again in the coming year). Also on the new writing front, this summer The Questors inaugural Festival of New Theatre is taking place 17 – 24 July – a programme of exciting new plays from new and emerging playwrights, plus workshops and panel events. Keep an eye on The Questors website to discover more

As for me, I am currently working on my next feature film. You can check out my website for more news on that, and other projects.

Note this play was due to play 1 – 5 Feb, but has been postponed due to positive Covid tests within the cast. New dates will be announced shortly. Check the below link for updates.

Note that this is an updated version of the interview originally published in February. The original run for this show was postponed due to covid, and so rescheduled for May

Previous: Review: Barry Humphries, The Man Behind The Mask, Churchill Theatre
Next: Review: Til Death Do Us Part, Theatre503