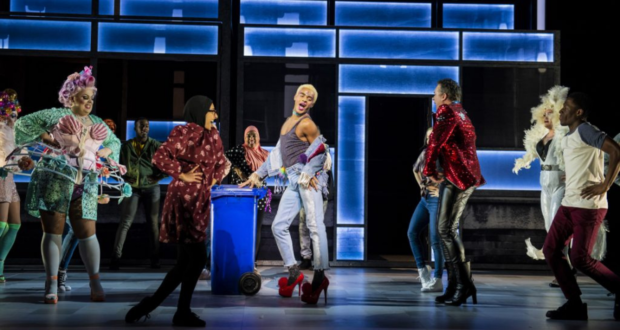 Everybody’s Talking about Jamie has seen five highly successful years; from its initial short run at the Crucible Theatre in Sheffield in 2017 to its West End transfer later that same year. It now returns for a UK tour, perfect timing as I haven’t seen the show on stage, despite it being on my musical theatre wish-list for some time. So, I entered the theatre with confidence that I was in for a fun, uplifting and life affirming night. I wasn’t disappointed.The show tells the story of a 16 year-old boy who has dreams of being a drag artist,&hellip;

You’re guaranteed to leave the theatre with a smile on your face and a spring in your step, but be warned, you might also end up singing along to the soundtrack all the way home.

Everybody’s Talking about Jamie has seen five highly successful years; from its initial short run at the Crucible Theatre in Sheffield in 2017 to its West End transfer later that same year. It now returns for a UK tour, perfect timing as I haven’t seen the show on stage, despite it being on my musical theatre wish-list for some time. So, I entered the theatre with confidence that I was in for a fun, uplifting and life affirming night. I wasn’t disappointed.

The show tells the story of a 16 year-old boy who has dreams of being a drag artist, based on the real-life story of Jamie Campbell from County Durham. He’s faced with a teacher who tells him to forget his dreams, a narrow-minded school bully and an absent Dad. Luckily, he’s got an incredible Mum and best friend who, amongst others, help him on the road to his dream.

The show is a lot of fun, and the music reflects the youthful energy that consumes the show, with Jamie’s fellow Year 11 students bouncing around the stage. But it’s amongst the pop-filled, catchy songs that some of the show’s softer highlights emerge. Sharan Phull steals the show as Pritti Pasha, Jamie’s best friend, and her performance of ‘It Means Beautiful’ is a goosebump inducing, wonderfully bittersweet moment. Her voice is an exquisite treat.

The role of Jamie on the tour is shared; Layton Williams, who is no stranger to the role, having played him both on the West End and the 2021 film and Adam Taylor, who makes for more than an adequate stand-in for those nights WIlliams is not available. Tonight Taylor is an indomitable presence. From the moment he announces his aspirations in the opening number ‘And You Don’t Even Know It’ to the exquisitely moving ‘My Man, Your Boy’ performed with the spectacular Amy Ellen Richardson, he has us all on his side. It was a lively crowd at the New Wimbledon Theatre, and although this isn’t always a good thing, tonight it’s lovely to hear shouts of support for Jamie and his dreams emerging from the darkened auditorium.

The set is incredibly clever, with a moving back-drop that is nightmarishly reminiscent of secondary school buildings. The stage is easily transformed from school classroom to drag stage in a way that of course benefits from a budget many shows can’t dream of, but there is also plenty of imagination within the design.

There is one small negative; the sound quality does let the show down slightly. There are moments when it’s hard to make out lyrics, particularly in big ensemble numbers where individual lines are taken by minor characters. There’s also a strange reverb effect in some of the songs, particularly those sung by Shane Richie who plays Hugo and Loco Chanelle. You’re left wondering whether this is a conscious decision, maybe if he’s less vocally confident than the rest of the cast, but if so, it still seems unnecessary. One of the audience members behind me so helpfully shouted “Alfie Moon!” when he appeared on stage, but it was easy to forget this actor’s iconic soap opera role, he was fantastic.

Everybody’s Talking About Jamie is one of those shows that will leave you grinning from ear to ear. The story is heart-warming, and the cast are full of infectious energy. You’ll put the soundtrack on as soon as you get on the tube and probably play it on repeat for a few days after (or is that just me). Altogether now “I’m a superstar and you don’t even know it. In a wonder bra and you don’t even know it”.

Everybody’s Talking About Jamie plays New Wimbldeon Theatre until Saturday 9 April, then tours until 30 April. Further information and bookings can be found here.