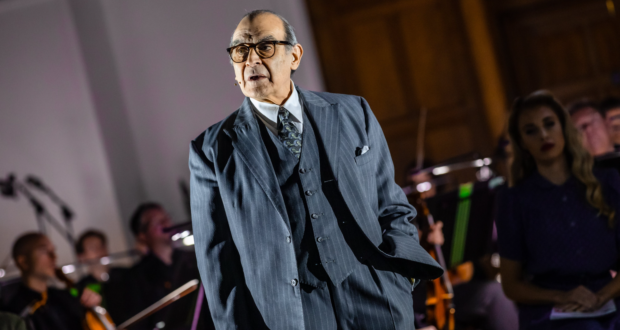 As a huge musicals fan, I wanted to love Mimma. I wondered if it would be particularly hard to watch, as current events seem to echo the horrors of the past more closely than they have for many years. I braced myself for tears, but hoped for an overall uplifting experience about female friendship in the face of adversity. This wasn’t quite what I got. Mimma tells the story of an Italian family in the Second World War, and while much of the action centres around Mimma herself (Celinde Schoenmaker), the action also follows her family back in Italy&hellip;

A new musical with so much potential to be powerful and moving, but falls a little short due to an overly complicated plot and a confusing musical identity.

As a huge musicals fan, I wanted to love Mimma. I wondered if it would be particularly hard to watch, as current events seem to echo the horrors of the past more closely than they have for many years. I braced myself for tears, but hoped for an overall uplifting experience about female friendship in the face of adversity. This wasn’t quite what I got.

Mimma tells the story of an Italian family in the Second World War, and while much of the action centres around Mimma herself (Celinde Schoenmaker), the action also follows her family back in Italy and her new friends in London. The iconic Sir David Suchet acts as a narrator and is very much required, as the two hour show covers from the start of WWII up to 1952. With so many characters and covering such a huge amount of time, the show does occasionally become confusing and it’s hard to develop emotional connections with the stories unfolding.

The confusion isn’t helped by the acoustics. It may have been the position of my seat at the side of the stalls in Cadogan Hall, under the overhanging gallery, but it was quite hard to make out song lyrics at times; crucial in a musical. Pair that with the fact the screen at the back of the stage was obscured, which showed the location and year of the scenes taking place, and it made for a befuddling experience. There were some exceptionally bad sound failures: at one point there was a blast of feedback so loud many of the audience were left rubbing their ears, while in another we heard the frantic muttering of the cast backstage as they worked out what side they needed to be on. It felt like a school production at times. There’s also the fact that the cast are regularly reading from a script, both when speaking and when singing. This was slightly bemusing. Perhaps it’s the norm at a one-off gala performance, but it added to the sense that you’d stumbled into the dress rehearsal.

The music of the show has so much potential, and individual moments were quite stunning. Yet altogether it didn’t feel cohesive, ranging from 1940s popular songs to Italian opera. While the variety of genres is effective in highlighting the different locations, the change was too pronounced. The recurring musical themes in the main songs feel overdone: you can sense the effort to create continuity through the show. I hate to say it, but some of the music was also just a bit boring. I found myself wondering what time it was and whether I’d get a tube home before the tube strike began.

Having said all this, the cast are phenomenal, as you’d expect from West End stars including Schoenmaker as Mimma, whose credits include Fantine in Les Mis and Christine in Phantom of the Opera, along with record-breaking West End and Broadway actor John Owen-Jones. Louise Dearman’s performances are a complete joy and some of the highlights of the evening, as she cheers Londoners and troops in the bars of Soho. Performing with these West End icons are trained opera singers, and when Ashley Riches and Elena Xanthoudakis performed a duet together, the applause lasted well over a minute. Put this cast together with the iconic Sir David Suchet narrating and the well-oiled machine of the BBC Concert Orchestra, and this show should be a complete joy. But with a plot that’s hard to follow and a musical identity that feels lost, it falls a little short.

Mimma: A Musical Of War & Friendship played for one night only as a Gala performance. Please check the show’s website via the below button for any details of further dates.