You can use WP menu builder to build menus
Home » Features and Interviews » Interview: Two thousand years in one night at Questors 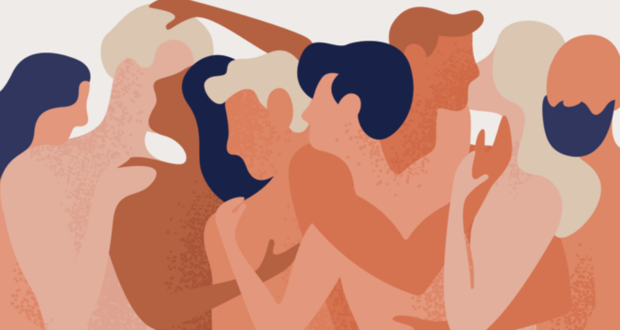 Interview: Two thousand years in one night at Questors

Author: Everything Theatre in Features and Interviews 11 March 2022 0 171 Views

We’re becoming quite good friends with the team at Questors Theatre now we’ve made their acquaintance. And what a great bunch they are, supporting the local community as well as being a place for students to learn more about theatre. So, we had no hesitation in spending some time chatting to Richard Gallagher, who as well as being a teacher in their academy turns his hand to directing his young charges in their upcoming revival of Moira Buffini‘s Loveplay, first performed in 2001.

What is it that attracted you to Loveplay?

Choosing a play for The Questors Student Group (acting students aged 18-30) is always a bit like doing a Rubik’s Cube. My first consideration is ‘Are there enough parts?’ The second ‘Are those parts all good enough to give everybody a fair crack of the whip?’ Plays with large casts are getting fewer and fewer so we frequently – not always – look for multiple-role plays that can be flexible. Loveplay is such a one. Then there are thoughts about artistic merit and ‘bums on seats’: happily, this play suits that as well. Frequently, we have to keep going back to square one, but Buffini’s play attracted me because of the superb writing, the humour, the observation and it has some really excellent parts for our cast to attack.

The play spans 2,000 years and ten separate moments in that time; how difficult is it to direct a play like this, when your actors are asked to perform such varying roles?

Our cast have worked extremely hard on varying their roles and finding the movement, vocal and personality differences that make them distinct. The two thousand years thing looked daunting at first but I decided to keep it very simple. There is almost no stage furniture and we are performing in traverse (audience both sides of a sort of ‘corridor’). Ant Griffiths (our Associate Director) and I have been working in conjunction with voice and movement tutors and also with The University of West London to find a shape for the production. In the end, each different era provides us with a neat one-act play and brilliantly drawn characters that kind of ‘act themselves’. It’s been a really rewarding rehearsal period and we haven’t found it difficult at all.

Are there going to be some frantic costume changes going on as you flick from one scene to the next?

When I cast the piece, I was very aware of costume changes. Although incredibly quick changes are doable where they first seem impossible, fortunately, there is ample room to change for each actor. Our wardrobe department have provided us with an impressive range of costumes and I am delighted with their, always excellent, work.

And how easy it is to ensure the time frames are made clear to an audience? Are you going to be using any little tricks to tell us when we are?

As I said, my motto has been ‘keep it simple’. University of West London students are working on animation, which will be projected. I haven’t seen the results of their labours yet, but I’m confident they will give us something really exciting. The other marker for period is, of course, the varying costume styles.

What is it that binds all these completely different moments together then?

Binding together the scenes is a rape that happens in Scene Two. The actor playing the woman who’s been raped plays other characters that keep hearing the sounds of this woman’s distress. ‘Is it a ghost?’ ‘Is it a reincarnation?’ We never know, but references are frequently made to the fact that this plot of land has changed over the years and ‘it might be haunted’. Overall, the ‘bond’ between different scenes is the human condition: that search for a partner and/or physical gratification that is in the DNA of most of us. Buffini is also at times quite scathing about the way men have treated women over the years. I think the women come off best in the piece, but it’s not a heavy-handed feminist message and she does give us same sex coupling and genuine love. The play builds to this and leaves us with an optimistic message.

The play is performed by The Questors Student Group; can you tell us a little about that?

This is the 75th year group of the Questors Academy (as we now call it). Group 75 are waiting in the wings and will be performing their productions next year. I believe it was set up all that time ago to give the then members some training and to expand their technique. Later, it became a unique part-time drama course, working in a similar way to most drama schools but giving people the opportunity to work at evenings and weekends and, therefore, hold a job down during the day. It’s very intensive and time-consuming (obviously), but it pretty much covers everything that any drama school course does. The first and second years can both be done together, but should anybody want to do the first year and leave it there, that is perfectly fine and we hope they still go forward with a range of transferable skills that may or may not lead them into theatrical careers.

You’re acting tutor for Questors Academy, so are the performers people you have been working with for a while?

I am the second year tutor. In the case of Group 74, I knew them in their first year but, because of COVID, it’s been a three year timeframe, rather than the usual two. I get to know them all when they’re in the first year but don’t start teaching them till the autumn/winter term, where we do short excerpts from a range of plays, punctuated by workshops. The winter/spring term is taken up with rehearsals for a studio play and then we have a short break before going into our summer production in the Judi Dench Playhouse.

Are there any performers we should be looking out for as future stars of the stage? Of course, we’d perfectly understand if you didn’t want to single out any one in particular, so maybe, any past students we may have seen?

One can never predict how students’ careers might unfold. We are not looking to necessarily push people into the profession: some ex-students are quite happy joining The Questors acting company and, of course, some want to go to a full-time drama school; others have, in the past, fallen into TV work, fringe theatre, film etc. I was very proud to see one of my past students in The Mousetrap a year or two ago and do sometimes see people on TV. Other students go into different jobs in theatre or screen such as one great friend of mine who has found her talent for direction and is currently working in the West End as an assistant director for Disney.

Finally, why should we come and see Loveplay? What is it about the show and the venue that we should all be excited about?

Loveplay is a beautifully written piece of drama that I found instantly engaging. As rehearsals have progressed, we’ve found more and more in it. It can be enjoyed on a superficial level, sure, but it can also give you something to think about. It’s funny, touching, accurate and unusual. I think it’s going to be a really enjoyable evening for our audiences.

Thanks to Richard for taking time out from his teaching and directing to chat to us.

Loveplay is on at Questors Theatre 25 March to 2 April. Further information and bookings via the below: