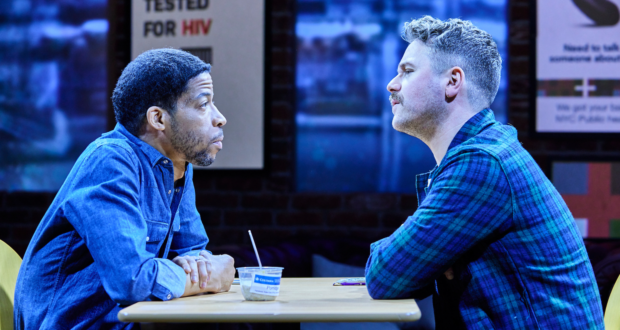 Having been an audience member at Tristan Bates Theatre in the past, I was curious to see its reincarnation, Seven Dials Playhouse, and its inaugural production, the European premiere of Steve. The theatre was spruced up and the staff welcoming. It felt as if I was entering a New York bar rather than a theatre; the stage bedecked with cosy, candlelit tables (at which some audience members sat), illuminated ‘windows’ (onto which animations would later be projected), and a dapper barman in the corner, offering free prosecco before the show started. What a lovely touch! A piano player sat&hellip;

A stellar cast bring alive this tribute to Sondheim. Steve is brimming with joy, humour, pathos, and poignancy.

Having been an audience member at Tristan Bates Theatre in the past, I was curious to see its reincarnation, Seven Dials Playhouse, and its inaugural production, the European premiere of Steve. The theatre was spruced up and the staff welcoming. It felt as if I was entering a New York bar rather than a theatre; the stage bedecked with cosy, candlelit tables (at which some audience members sat), illuminated ‘windows’ (onto which animations would later be projected), and a dapper barman in the corner, offering free prosecco before the show started. What a lovely touch! A piano player sat in the back corner of the stage, playing a host of show tunes.

The barman, Esteban (beautifully played by Nico Conde), gave a great introduction, reminding the audience that facemasks are mandatory and that it is important to keep theatres alive and the cast safe. I was all too pleased to hear such an important message reinforced, particularly in such an intimate theatre. He informed us that the production was dedicated to Stephen Sondheim, who passed away last year.

Steve begins with friends gathered to celebrate the birthday of Steven (David Ames, known for his many years playing Dr Copeland on BBC’s Holby City). Steven has a very close friendship with his friend Carrie (Jenna Russell), but things become fractured when his boyfriend, Stephen (Joe Aaron Reid), enters the picture. The conversation among the friends around the round bar table, including Matt (Michael Walters) and Brian (Giles Cooper), feels very real; the kind of talk that friends who have known each other for years might have, full of banter, but with a frisson of tension in the air. Steven clearly does not think much of Brian, boyfriend of his best friend Matt. On occasion, Steven explodes, until he finally reveals that he has, that same day, seen some incriminating, sexual texts on Stephen’s phone. Each time Steven gets angry, the tempo and volume of the piano reaches a crescendo, matching Steven’s anger. Esteban regularly enters with drinks, nicely adding a different dynamic, and another reason for Steven and Stephen to argue, when the latter openly flirts with the dishy waiter.

At times, the piano playing could be distracting, but at other times, I longed to hear it, particularly whenever I was less engaged. There is a lot of humour in the piece and the dialogue between Steven and Carrie is particularly lively and engaging. But the little I know about musical theatre – and Sondheim – would prove tricky to write on a Post-it, so a lot of the musical theatre references (of which there were plenty) were sadly lost on me. This spoilt things a little: I felt like an imposter who is not in on the joke.

There were many topics in Steve which are certainly universal – ageing, monogamy, fatherhood (the two protagonists have a young boy), LGBTQ+ themes and mortality. What stood out for me were Steven’s monologues, which were heartfelt and moving. In one poignant scene with Carrie, he talks about how lonely he is and how he regrets decisions and life choices he has made. We get a glimpse into his past life when he asks “Why did my father leave?” and there is a sense that this is what has defined his life.

The final scene between Steven and Stephen reminded me why I love theatre so much – the power that an actor’s performance (“Just hold my hand Stephen”) can have to reduce me to tears. Some scenes felt rather drawn out, and at 90 minutes without an interval the play was a little too long, but overall, I found this production engaging, humorous and joyous. Clearly, a lot of thought has been put into the set, sound, and lighting to create the perfect ambience. The writer perfectly conveys the message that life is for living (and for loving) and we should embrace it while we can. Hear hear!

Steve plays at Seven Dials Playhouse until 19 March. Further information and booking via the below link.