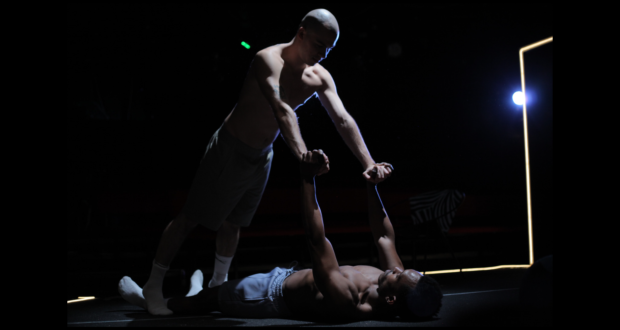 PROUD by Bren Gosling is a kind of love story following Roland (Taofique Folarin), a 40 year old gay black man in London. Roland falls for 21 year old street sweeper and Syrian refugee Amir (Andrei Maniata) whilst struggling to connect with his 15 year old son, Gary (Kaine Hatukai). Director Marlie Haco and the design team present the play as a hybrid of a traditional chronological drama, with realism and familiar scene structure, and a sensual, provocative physical theatre spectacular. Often, when engaging in difficult or serious conversation, Haco has her actors play with a basketball; the effect&hellip;

This “kind of love story” is filled with real emotion and understanding, and in Andrei Maniata has a shining star of the future.

Director Marlie Haco and the design team present the play as a hybrid of a traditional chronological drama, with realism and familiar scene structure, and a sensual, provocative physical theatre spectacular. Often, when engaging in difficult or serious conversation, Haco has her actors play with a basketball; the effect of this is powerful, as we really see multiple sides to all characters. Amir is innocent yet cheeky, Gary is hurt yet hopeful, and Roland conflicted but playful. The movement sequences throughout are mesmerising, powerful and really engaging. Although stylistically non-naturalistic, they actually invoke real emotion and understanding from the audience. As the saying goes, actions speak louder than words.

Maniata is a shining star on the stage. He wholly embodies Amir and portrays each characteristic with skill and authenticity. The vulnerability shown is why we fall in love with the character. Across the whole cast there is consistently a great sense of play and openness. However, at times certain situations feel somewhat overacted and not quite authentic, particularly in the more intense, high stakes moments involving Roland and Gary. This also may be due to the scenes between these characters coming across as repetitive.

The characters, themes and story of PROUD are crucial to modern day theatre. Even if Gosling’s writing at times lacks consistency of wit and punch and some of the humour doesn’t land, it is an influential and touching text that is superbly realised.

Set and costume design from Justin Nardella add another level to the text, direction and performances. The costumes are fun and the set is modern, relatable and lively. Ákos Lustyik’s composition and sound design beautifully complements lighting from Ben Jacobs: they come together to enhance the storytelling, and at times the light and sound feel like a character in their own right.

PROUD deserves great plaudits at the very least for its ambition, innovative storytelling and the way that it amplifies the voices of underrepresented groups and communities. Directed in an experimental yet precise way and featuring a strong cast of open and skilled actors. I will certainly be following the journey of this play and will make sure to catch it again should it have a future run.

PROUD plays at King’s Head Theatre until 12 March. Further information and bookings via the below button.

Aaron-Lee is an actor, writer and director based in West London. They are passionate about diverse and innovative small-scale theatre. Aaron has had plays performed at The Cockpit, Bread and Roses and Hen and Chickens Theatre. He cannot wait to get started on his next project. Aaron-Lee is represented by Birdston Talent Management.