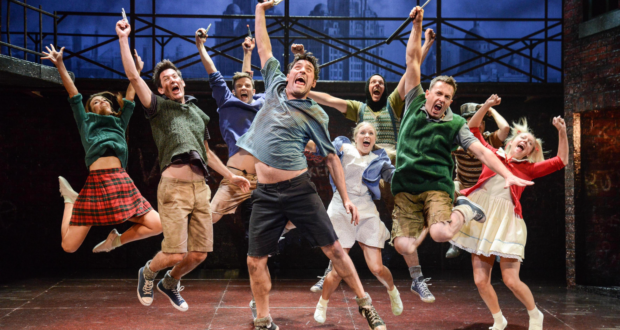 Writer Willy Russell’s award-winning musical Blood Brothers has been a hit worldwide for 40 years, wowing audiences from Liverpool to Australia, and spending a considerable time on the West End. This emotive story tells the tale of Mrs Johnston, a single mother in Liverpool who, just as she is expecting twins, is deserted by her husband and left to bring up her large family alone. She can’t afford to keep both of the new borns and is persuaded to give one away to a wealthy woman who, she thinks, will give him everything he needs in life. The boys&hellip;

A classic production that will take you through every emotion from belly laughs to tears. It’s a really great night out, but oh so shockingly relevant in its social commentary.

Writer Willy Russell’s award-winning musical Blood Brothers has been a hit worldwide for 40 years, wowing audiences from Liverpool to Australia, and spending a considerable time on the West End. This emotive story tells the tale of Mrs Johnston, a single mother in Liverpool who, just as she is expecting twins, is deserted by her husband and left to bring up her large family alone. She can’t afford to keep both of the new borns and is persuaded to give one away to a wealthy woman who, she thinks, will give him everything he needs in life. The boys are brought up in separate social worlds, but meet by accident when they are seven, becoming ‘blood brothers’. Across the years we see an examination of nature versus nurture, and how economic security can bring two very different lives to people who are practically identical. And from the start we are made aware that tragedy is inevitable.

So what does Bill Kenwright’s touring production bring to the table in 2022? It too has been around for ages, and has undoubtedly established itself as a classic version of the show, with the stage design, sound and lighting all very familiar, though at times cheesily retro. The talented cast shine in their musical abilities and are capable actors, but often it’s the script itself that brings the power to this performance. And admittedly, even the script is now a little dated in places.

To get this out of the way first, I’m a Scouser and the accents here are largely all over the place; once the singing starts you can usually forget it. Putting that aside, let’s look at the performances. Sean Jones as Mickey is a joy. He handles a vast breadth of characterisation and emotion, from hilarious seven year-old child to heartbreakingly depressed adult, with magnificent sensitivity and credibility. His vulnerable portrayal of a working class person, crippled by a lack of self-esteem and confidence instilled in him by social circumstances, is totally compelling and simply heart-wrenching. Joel Benedict as the posh Eddie provides a solid, if a little caricatured, foil but the two navigate the challenging character developments with great synchronicity.

Niki Evans as Mrs Johnstone has a stunning voice, perfectly capturing the emotion of the script when singing, but at times her relationship with her estranged son feels a little ‘by the book’; just missing the suppressed anguish that is so much part of the character. Similarly, Robbie Scotcher as the Narrator has a voice to die for, but his character often comes across as more of a bouncer than an oppressive symbol of impending doom. Underlying the starring roles, Danny Taylor’s Sammy is really enjoyable as the mad bad lad who is funny and ferocious but clearly damaged by social neglect.

Here in Wimbledon the show receives a standing ovation, many of the audience tearful. The songs are as powerful as ever, and it’s a fabulous story complemented with a talented cast. But the impact of this production is undoubtedly in its timing. I was outright shocked at how relevant the story is to today’s world, the heart-breaking social division that underlies it highlighted in the news this week, as posh people party and others decide between eating or heating. It raises the questions of whether are we ever going to do anything about class division? Do we accept it’s just ‘A Sign of the Times’ until it happens to us, or do we resist it now?

Go and see Blood Brothers. Take your family and friends. You will have a fabulous night out, but also really understand what the desperation of poverty can cause people to do. Such knowledge is power.

Blood Brothers plays at New Wimbledon Theatre until 12 February, and then touring the UK throughout 2022. Check local venues for details.

Previous: Interview: Getting into a Pickle with Deli and Tanya
Next: Review: Dirty Dancing, Dominion Theatre