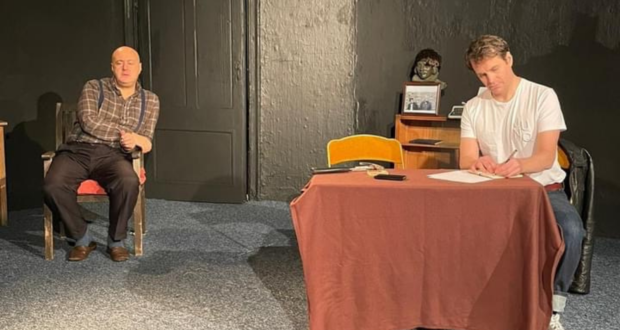 My last visit to Old Red Lion Theatre was around two years ago, so after such a long wait I was looking forward to seeing Joe &amp; Ken, a new play written and directed by John Dunne, who also penned a book with the same title. Joe Orton, the playwright and subject of this drama, lived with Kenneth Halliwell, his gay lover, in a small Islington flat in the late fifties. It is therefore very apt that the play has come to this Islington venue, and The Old Red Lion pub is neatly referenced within it as being one of&hellip;

A two-hander which examines the stormy relationship between the playwright Joe Orton and his lover Ken Halliwell, but which fails to ignite a spark.

My last visit to Old Red Lion Theatre was around two years ago, so after such a long wait I was looking forward to seeing Joe & Ken, a new play written and directed by John Dunne, who also penned a book with the same title.

Joe Orton, the playwright and subject of this drama, lived with Kenneth Halliwell, his gay lover, in a small Islington flat in the late fifties. It is therefore very apt that the play has come to this Islington venue, and The Old Red Lion pub is neatly referenced within it as being one of the places where Joe sought inspiration in his writing.

What first drew my eye on the set was the timeline chalked onto black walls, detailing key dates such as birthdays, the year Joe went to RADA (the couple were both actors as well as playwrights), and the date when they were imprisoned. A hammer sat ominously on a desk centre stage. On 9 August 1967 Kenneth Halliwell bludgeoned Joe Orton to death with a hammer and then killed himself with an overdose: should we expect blood and guts in Act Two? I hoped so!

The play starts off well with good comedy and pace, innuendos, and references to gay sex – things which Orton was famous for in his writing. It is clear from the outset that Joe (Craig Miles) and Ken (Tino Orsini) are struggling artists, living off “fresh air”. Joe is the promiscuous one, meeting men in toilets and coming home to a faithful Ken, who admits to mental health problems. The themes of struggling artists, class (Joe is very proud of his working-class roots, although not so proud of coming from Leicester!), sexuality and mental health are powerful subjects, which are as relevant today as they have always been. Rather poignantly, however, homosexuality was still illegal until a month before the two men died.

In Act One we see Joe and Ken devising a play about getting arrested for defacing library books and being imprisoned – both things which happened in actuality. Frequently they switch into other characters (a librarian, a policeman…), as they re-enact possible scenes from their play. They also break the fourth wall and address the audience, although this seemed disconnected. The first act of a play often ends on a climax. Here, there was no climax to speak of (although plenty of climaxes of another kind were spoken about!) and the whole thing somehow petered out. Even the final monologue, where Ken confesses to killing Joe and himself, lacks the long-awaited spark.

In Act Two, the couple are holidaying in Tangiers, living a life of debauchery, but because the set barely changes it still feels like Islington, so this was a little unsatisfactory. What the second act does deliver is a stark reminder that money and status (Joe is now a famous, wealthy playwright) do not bring happiness. There is a great moment when Ken dreams of “rainbow-coloured marches” where “anyone and everyone” is welcome; how wonderful that this is the reality today, but how sad that this was not the world Joe and Ken lived in.

There are some nice moments in the performance when the two men flirt with each other and give each other a kiss and a cuddle, but at times they looked uncomfortable; whether with each other or with the complex script, it was hard to tell. Sadly, both actors seemed to struggle with the dialogue. Perhaps it was a case of finding their feet – after all this was only day three of the run. There are some effective, tense moments, and also some poignant interludes, such as Ken seeking reassurance that Joe loves him, but these are momentary sparks in an otherwise drawn out and rather lacklustre production.

Written and directed by: John Dunne
Produced by: JD Productions

Joe and Ken plays at the Old Red Lion until 30 October. Further information and booking via the below link.