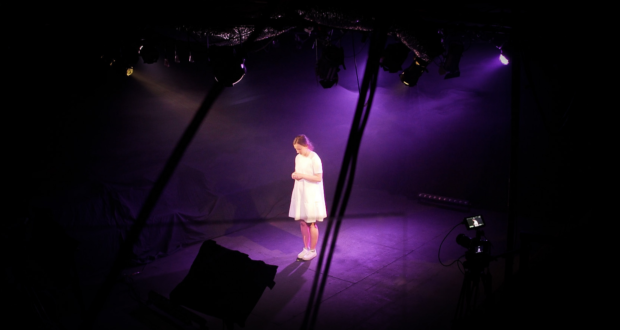 Religion and sexuality: an absolute minefield of contradictions. This combination, of course, makes for endless material for theatre makers, but with the risk that in taking on such oft-used topics a play can feel dull and unimaginative. How do you approach these subjects in a fresh way, especially with a play that is for online consumption, so has to work that little bit harder to keep your attention? Thankfully, writer and performer Leigh Douglas finds her own unique take on these much-covered issues, guiding Sacrament through the minefields of Catholicism and a young girl coming to terms with her&hellip;

A play that will surprise you in its approach to religion and sexuality, with a performance that is just a wonder to behold.

Religion and sexuality: an absolute minefield of contradictions. This combination, of course, makes for endless material for theatre makers, but with the risk that in taking on such oft-used topics a play can feel dull and unimaginative. How do you approach these subjects in a fresh way, especially with a play that is for online consumption, so has to work that little bit harder to keep your attention? Thankfully, writer and performer Leigh Douglas finds her own unique take on these much-covered issues, guiding Sacrament through the minefields of Catholicism and a young girl coming to terms with her sexuality, in a way that will delight.

Douglas plays Irish Catholic ‘The Girl’, as she describes herself throughout, in this one-woman monologue. She grows from curious youngster to young adult before us. If there is one complaint, it is that the story takes a little while to find its footing. Yes, we need to hear of her young self in order to understand how she grows up as she does, but the opening section is too drawn out; it doesn’t command your attention fully, and risks losing you before it really takes off. Which would be a shame, because you do not want to miss where it goes.

Because take off it does, as The Girl leaves the strict confines of her home and small Irish community, heading off to England to attend university. It’s here she comes of age, first questioning her sexuality, then accepting it, however much it goes against everything she has been taught through her religious upbringing. She additionally confronts her fear of how this will be accepted when she returns home. It’s a simple enough premise, and certainly one that has been well covered in countless other productions.

So what elevates Sacrament to more than ‘just another story of a girl and the contradictions her sexuality brings due to her religion’? Two things really, and both are Leigh Douglas. Firstly, her performance: it is truly remarkable, and surely has to be in the running for recognition down the line. The energy and flow of her words is just a wonder to experience. On the bare and dark stage (itself a very enjoyable facet of this play), she skips, she glides, she collapses, all whilst propelling words out at frantic speed. She absolutely demands your attention. Given that this is a 90-minute monologue, without such energy the play would be doomed. I would say this is possibly the best solo performance since I was lucky enough to witness Joseph Potter in last year’s The Poltergeist; another performance that left me utterly mesmerised.

The second element is, of course, her writing. Without it the performance would not soar as it does.  There is beautiful contrast in the way the religious aspects are forced upon you; a light shone upon the sheer hypocrisy in existence. In total contrast, the revelation of her sexuality is remarkably subtle, hardly ever at the forefront, even though it forms the centrepiece to everything. It’s this delicate care taken to not shout it out that leaves you overjoyed for her, as she slowly realises what her sexuality is. It also makes the ending all the more surprising and uplifting; the subtle twist in the tale that was really never quite expected.

Sacrament is one of those wonderful plays that creeps up on you. I started with uncertainty, wondering if it could hold my attention for 90 minutes, whilst I settled back on the sofa. It ended with me smiling from ear to ear at just what a revelation it was. Bravo Leigh Douglas, bravo.

Sacrament is available to stream from King’s Head TV until 12 May. Further information and booking via the below link.

Previous: Review: Henry V, online via Zoom
Next: Review: I Wish My Life Were Like A Musical, online @ King’s Head Theatre