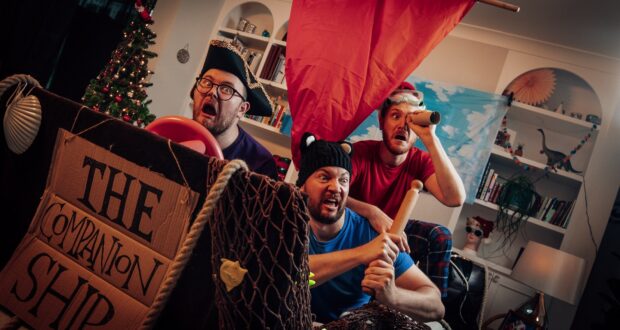 “Christmas isn’t Christmas until…” announce Sleeping Trees, before pulling out the kind of book those of a certain age would surely associate with Jackanory, large enough that a small child could probably be squashed between its heavy-set covers. “Until Sleeping Trees Annual Christmas Living Room Adventure.” Except, correct me if I’m wrong, Sleeping Trees have never done a living room adventure before now? But 2020 being the year it is, we’ll forgive them, and just enjoy that whilst live panto has been severely affected this Christmas, at least some has survived, whilst others, such as this, have found a&hellip;

Sleeping Trees use all their clever writing skills to create an online panto that really is a joyous offering, whether you’re still a kid or just want to behave like one for an hour.

“Christmas isn’t Christmas until…” announce Sleeping Trees, before pulling out the kind of book those of a certain age would surely associate with Jackanory, large enough that a small child could probably be squashed between its heavy-set covers. “Until Sleeping Trees Annual Christmas Living Room Adventure.” Except, correct me if I’m wrong, Sleeping Trees have never done a living room adventure before now? But 2020 being the year it is, we’ll forgive them, and just enjoy that whilst live panto has been severely affected this Christmas, at least some has survived, whilst others, such as this, have found a new home online.

As the title suggests, The Legend of Moby Dick Whittington is another Sleeping Trees mash-up, taking the panto element of Dick Whittington and somehow merging it with a dose of Moby Dick. Show mash-ups are nowadays an old trick done by many, but Sleeping Trees have been doing this madness for long enough that they are quite expert at it. Here the story, for what it’s worth (we aren’t here after all for a classic rendition) sees Dick accidently push Santa into the mouth of a whale. So Dick and cat set off to hunt down the whale to rescue Santa, and thus save Christmas, enlisting along the way Dr Ahab. Yes, Doctor, not Captain, for this is the daughter of the original Ahab, and whilst her dad was hellbent on killing a whale, she is instead into the study and conservation of the species. A much more suitable endeavour for our modern audience.

One of the big gags from any Sleeping Trees live show is how the cast of three jump repeatedly between characters within a scene. Whilst a filmed version might allow this to happen with much more ease, that gag really isn’t going to work in the same way on the small screen. Kids are just too savvy in what video editing can accomplish. Thankfully the team clearly realise this and instead turn their attention to what else they can do with an online format, and most importantly, how to make a filmed show still feel a two-way affair, which any panto really should be. Filmed in what could be anyone’s home, every room becomes a location, everyday objects become scenery and props. Here the top of the stairs becomes the balcony from which Dick makes his public announcements, the bathroom becomes the ocean where the whale languishes in the bathtub, whilst the sofa becomes part of their ship and some smelly bedsheets become the insides of a whale. It’s not rocket science, and that’s the joy, because, hey kids, we can all do this. In fact, come on, admit it, we all did it when we were younger, didn’t we? And because this is filmed, they can play about quite drastically with these ideas; little flashing messages and instructions onscreen, fake pausing to allow time to go and collect what you need, even displaying hashtags to encourage kids to share their own ships online. And yes, I will be checking out both #HomemadeShipbuild and #HomemadeShipwreck over the coming weeks to see if anyone joins in.

There is such beautiful innocent charm to this show, at times you wonder if they are pitching their shouts to join in at the adults as much as they are the kids. Because believe me, after watching this, I so want to turn my sofa into a ship, and then I plan to shipwreck myself on some desert island somewhere to see out the rest of this rather unusual year.

The Legend of Mody Dick Whittington is available to stream until 31 December, tickets from just £5.00. See website for full details.