Home » Features and Interviews » Interview: How Keeley Lane zoomed to the top of the beanstalk. 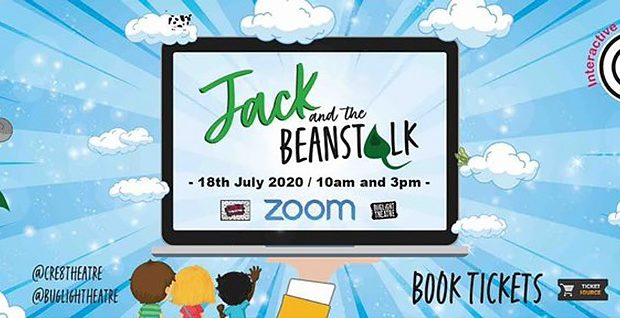 With many families stuck at home with children during this summer’s lockdown, Zoom has offered some incredible ways for them to come together in a creative environment. Always keen to learn about new ways to present a show, we turned to Buglight Theatre’s Keeley Lane, whose Zoom production of Jack in the Beanstalk has been a big hit with families. 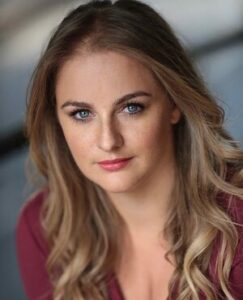 Was Zoom always your preference for producing an online show?

Zoom was the perfect platform as it truly allows for interactivity. If there wasn’t the capability for the audience to impact the piece then I wasn’t interested in making it at all. I personally would rather watch a good series or film than streamed theatre, so this needed to offer something different. And panto fitted well as it’s the perfect genre for interactivity.

Did you find the Zoom features liberating?

I’d never done a panto or family theatre before so it was all brand new. I’m not sure without the constraints of lockdown I would have ever developed and directed a panto, but it was a really fun, creative challenge.  It was liberating in some ways to be theatrical, and not to create a ‘shit’ film. We needed to remember constantly that this is theatre and play with its conventions, e.g. having the beanstalk as a real vegetable growing in front of Ms Pinch’s imaginary window.

Was it difficult to avoid compromising visual quality when working remotely?

We had to embrace the constraints of the visual quality: we had fab costume etc but not the budget to have our backgrounds all designed. But for the future, with a bigger budget I’d love to have a visual designer on board to create our virtual videos and backgrounds. I think with this though you forgive that it’s not perfect – it’s live theatre on Zoom and everything could go wrong, so that’s really exciting to be part of.

Tell us a bit about the audience interaction, and what considerations you have to make regarding that?

The interaction was crucial to the piece for me. I wanted the audience to feel active, not passive, so the interactions needed to feel imperative; for example, giving us magic words to help the beanstalk grow or helping Ms Pinch tell Jack & Dazey they had to get jobs.

The fact we could spotlight people at any time I think meant the audience wanted to be more active and dance away at home so that we might select them. We had a system for letting people in to the show and were careful who we spotlit on Zoom. The host can hide anyone’s video at any time or throw them out, so it’s relatively manageable.

Is it difficult for actors to adapt to the small screen rather than a live stage?

Yes, a lot of what you have to play with is eye line and perspective to try and make it look like the actors are in the same room or place. If we had had longer I would have developed this further. We found that the further away from screen the characters were we lost connection with them, hence a lot of big faces in the screen. We pushed this a lot, playing with them really close up to camera as it’s the only thing we had much leeway with really: we didn’t have the luxury of space and depth as you would on stage. Interacting with the backgrounds and having something in front of you, such as Ms Pinch’s iron and window, allowed us to place them in the space. This is something that with more time and money I’d want to explore further.

The performances still needed the same energy as the big stage and so it meant the actors were occasionally projecting where we didn’t need to. It’s a hard line between having a lack of energy and too much on these little screens. We kept re-iterating we wanted big panto performances to get those expressive faces but maybe didn’t bring the vocal down as much as we could have at certain moments.

What has the audience response been regarding paying for online content?

The reaction was brilliant – we even had a few viewers saying they were happy to donate a little more because there were five in their party. I think people appreciated the fact we were valuing our artists and paying them, so were happy to pay the price for that. There is a lot of free online content available, which is fantastic, but I worry it will devalue what we are all doing.

Do you feel online productions can offer a successful alternative revenue stream, or is it just a necessity in the current climate?

I don’t think these shows offer a great alternative financially. I do however think that regardless of whether lockdown continues or not they should be available to people. Lockdown has really highlighted how isolated a lot of people already were.

When I did the Big Telly show on Zoom, in the Q&A afterwards there was a lady from NYC who is severely disabled and can’t leave her house easily. She said it was the first live show and audience she had been a part of in a long time. Seeing and participating in the audience was so special to her. She urged this work should continue.

Another lady with autistic children expressed that while relaxed performances are good in venues this was a revelation, as her kids could scream and shout at home without bothering anyone and there wasn’t the usual bother of getting to the theatre. So I do think this sort of work offers an alternative accessibility package to venues and audiences.

Having created an entire family show in Zoom what’s next for you?

If panto can’t happen this Christmas we hope that a venue will pick up Jack & The Beanstalk for us to offer it to audiences far and wide with a bit more of a budget behind it.

We’re also developing a family show called Glow – hopefully in venues, but we will have a Zoom alternative as well. It’s about Gwen the Glow worm who has lost her glow, and the audience will help her to find it. It’s an introduction to mental health and resilience for young children. We just need the funding to make this happen.

Glow was actually set to be our first family show before lockdown happened so we’d love to progress this. With Glow I think there will be puppetry classes, but we are developing it for both online and in person.

We’re also working on how to grow as a company and maybe go for NPO status next time round, so lots of work to do as an organisation.

The company I worked with on my first zoom show, Big Telly, are fantastic and are really pushing the boundaries with all of this. They are working with a gaming company to bring us Alice in Wonderland on Zoom. It’s set in a theme park: I cannot wait to see what magic they have for us. The danger with these Zoom shows is they get a bit samey, but I know with them they will really push forward to realise the next new thing!

As always, our thanks to Keeley for taking time out to chat with us. With panto season looking less likely as we approach the end of the year, we do hope Jack and the Beanstalk will available again for families to enjoy.