You can use WP menu builder to build menus
Home » Reviews » Drama » Touching the Void, Duke of York’s Theatre – Review 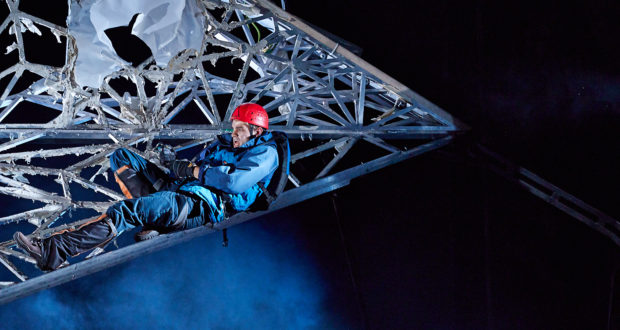 With nosebleeds on the top tier of the O2 Arena and a limit of two flights of stairs at a time I think it is safe to say I am not, nor am never likely to be, a climber.&nbsp; So, coming from a position of complete mountaineering ignorance, I found this play absolutely riveting.&nbsp; A cosy London theatre is obviously not going to be able to replicate numbing cold, frostbite, hunger, thirst, fear or complete exhaustion, but even so, this production does a pretty fine job of evoking them all.&nbsp; Based on the true story of Joe Simpson and&hellip;

Gripping and exciting account of true events on the Peruvian Andes. Age guidance 12+

With nosebleeds on the top tier of the O2 Arena and a limit of two flights of stairs at a time I think it is safe to say I am not, nor am never likely to be, a climber.  So, coming from a position of complete mountaineering ignorance, I found this play absolutely riveting.

A cosy London theatre is obviously not going to be able to replicate numbing cold, frostbite, hunger, thirst, fear or complete exhaustion, but even so, this production does a pretty fine job of evoking them all.  Based on the true story of Joe Simpson and Simon Yates, two young men who aimed to become the first to climb the west face of the Siula Grande in the Peruvian Andes. But disaster strikes. Joe falls, breaking a leg, and is left for dead by his climbing companion. Somehow, he manages to crawl for three days back to base camp, just in time to be rescued.  There’s also a book and documentary, but being unfamiliar with both (no, I don’t know why either) I’m not comparing the stage adaptation to any other account.

Opening at Joe’s wake, his sister, Sarah (Fiona Hampton) is angrily demanding answers and explanations. Simon (Patrick MacNamee) introduces her to climbing, trying to explain why some people become addicted. He is assisted in this by Joe himself (Josh Williams) and ‘Hippy with clown trousers’ Richard (Angus Yelowlees), who is in Peru looking for adventure, joining the two climbers as their base camp manager. Yelowlees provides much of the humour, as well as some interesting history and explanations on climbing terms and techniques. We are taken through the preparations – such as they were – the climb and Joe’s fall, including an eye watering but matter-of-fact description of the resulting injuries. The second act deals with Simon’s dilemma and Joe’s agonising crawl back to base camp during which our much more becomes clear to the audience.  Much of his journey back is spent at floor level, obviously, so if you happen to be sitting behind someone tall in the stalls you may miss out.  The whole cast are excellent, Hampton and MacNamee in particular.

There has to be a big shout out to the creative team. Jon Nicholls’ atmospheric music and soundscape hint at the hallucinatory aspect of the play from the very start.  And combined with Chris Davey’s lighting, it manages to build and maintain tension throughout.  During Act One, there is an assortment of tables, chairs and pub signs precariously arranged about the stage that the cast use for climbing.  That looked risky enough, but when the climbers later reach the Andes, Ti Green’s paper-covered, moving, climbing frame contraption takes things to a new level (pardon the pun). Props are moved in and out of position by faceless parka clad crew, looking like orange yeti. There are some nice additional touches, such as using a peanut to give a sense of scale and providing information at the very end about what those involved did after these events.

I still don’t really understand why anyone would embark upon such a quest with such a ‘wing and a prayer’ attitude and bare minimum resources, it seems reckless in the extreme.  I would have liked to know more about Simon’s thought processes before leaving Joe and possibly more about their relationship, but I’m surely being picky.  Despite knowing the outcome early on this is still an exciting and exhilarating production.