You can use WP menu builder to build menus
Home » Reviews » Musicals » Bare: A Pop Musical, The Vaults – Review 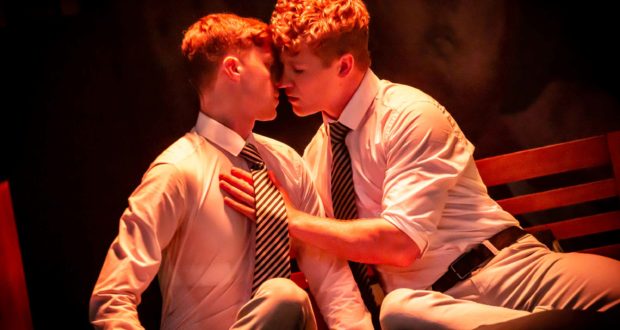 Originally performed in 2000, Bare: a Pop Opera is starting to show its age.&nbsp; Set in the senior year of a private Catholic school somewhere in North America, it is centred around a relationship between two teenage boys Peter (Daniel Mack Shand) and Jason (Darragh Crowley).&nbsp; Jason is the self-confident golden boy, whilst Peter is more reserved and cautious.&nbsp; They have, so far, hidden their relationship from the rest of their year group, most of whom have their own issues to contend with; body image, self-worth, promiscuousness, drug taking, teenage pregnancy.&nbsp; It’s all in there, feeling a bit like&hellip;

Originally performed in 2000, Bare: a Pop Opera is starting to show its age.  Set in the senior year of a private Catholic school somewhere in North America, it is centred around a relationship between two teenage boys Peter (Daniel Mack Shand) and Jason (Darragh Crowley).  Jason is the self-confident golden boy, whilst Peter is more reserved and cautious.  They have, so far, hidden their relationship from the rest of their year group, most of whom have their own issues to contend with; body image, self-worth, promiscuousness, drug taking, teenage pregnancy.  It’s all in there, feeling a bit like the plot of a soap season condensed into two hours.  The three adults in the story comprise of the priest (Mark Jardine) who, hiding behind ancient religious teachings, is no use whatsoever to the troubled teens; Peter’s mother (Jo Naptjine) who is in denial about his sexuality; and sassy sister Chantelle, a larger than life character played to perfection by X Factor USA finalist Stacy Francis.

Despite The Vaults being a friendly and atmospheric venue, it does have its drawbacks.  The main one on this occasion being the seating, comprising hard and very uncomfortable chairs squished in to a warm and stuffy space.  The stage is T-shaped with the extended top bit allowing for the well-choreographed movement and dance routines.  However, this also throws up another problem, in that it is sometimes difficult to hear the lyrics when the characters are at the opposite end of the stage or have their backs to sections of the audience. The bizarre backdrop also needs a mention, consisting of giant painted faces with very odd, pained expressions.  While it did come into its own during the ‘rave’ scene when it seems as if the faces were joining in, the rest of time it is just a bit distracting.

Although the overall feel of the piece is quite melancholic, there are humorous moments running throughout.   I laughed at the variations on the theme of school uniform, and do watch out for the amusing ‘Romeo off’ between the two contenders for the title role in the end of term play, Romeo and Juliet (of course).  Nadia (Georgie Lovett) has some funny one-liners when she is being particularly bitchy, and many of the songs are quite upbeat.  God Don’t Make No Trash springs to mind as it really showcases the Stacy Francis’s voice, but also ensemble pieces Confession and Birthday, Bitch,

Most of the cast are not that much older that teenagers themselves, obviously talented and gave performances that belied their overall lack of experience.  To mention a few: Georgie Lovett playing Jason’s sister nailed both the cutting comments and then the despondency in the song A Quiet Night at Home.  I was surprised to read that this is her professional debut;  Tom Hier as ‘nice’ boy Matt did not let the character fade into the background;    Mack Shand as Peter may not have the strongest singing voice compared to others in the cast  but he did convey the changes his character goes through well; there is a particularly harrowing scene when he is trying to come out to his mother; and finally, Darragh Cowley’s excellent performance as Jason also stands out.

Notwithstanding the enjoyable performances, as the evening progresses I the conclusion is that the piece is a bit hackneyed and melodramatic, until we come to the final scene, bringing reality back with a jolt.   Go for an entertaining evening, but take a cushion and some tissues.